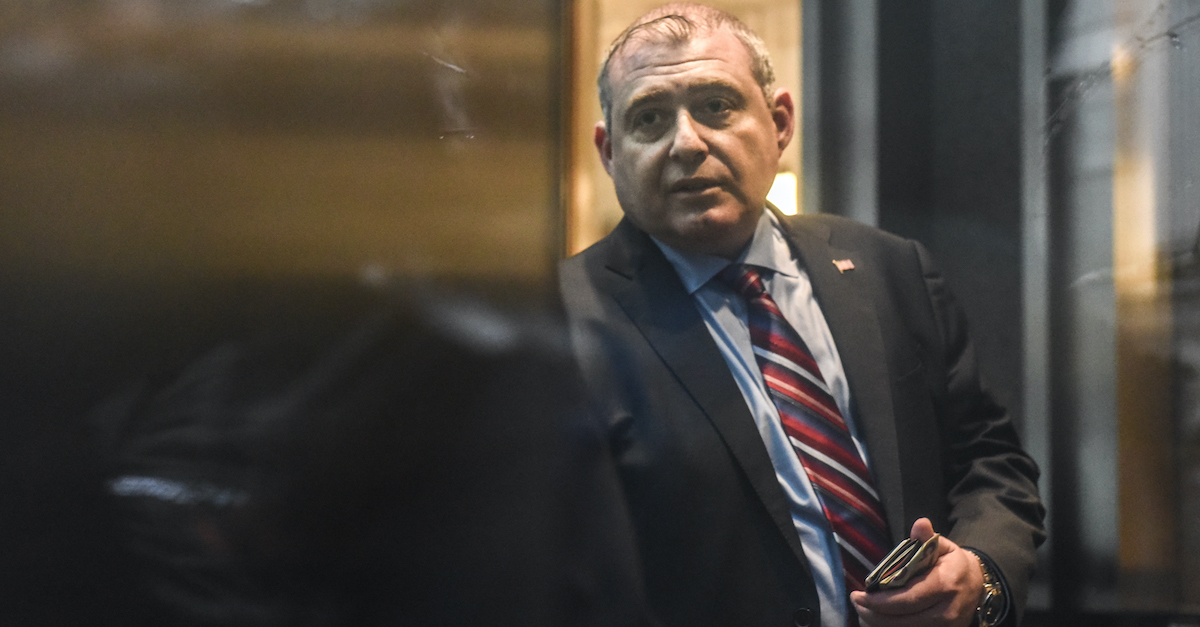 An indicted Ukrainian-Floridian business associate of Rudy Giuliani, who trotted the globe in search of dirt on the Bidens only to be left out in the cold by President Donald Trump, has asked a federal judge for permission to share documents and iPhone evidence with Congress.

Lev Parnas’s lone attorney, Joseph Bondy, wrote a letter to U.S. District Judge Paul Oetken in the Southern District of New York on Monday. He asked for the Obama-appointed judge to approve the sharing of evidence in the government’s possession. Oetken previously said, “I certainly expect to grant that request.”

Bondy said a couple of things: 1) the government does not object giving this evidence to the Rep. Adam Schiff-led (D-Calif.) House Permanent Select Committee on Intelligence; 2) the information is relevant and responsive to a congressional subpoena; 3) it’s important that congressional investigators have this so they can “corroborate the strength of Mr. Parnas’s potential testimony.”

“Tomorrow, the Government will be producing documents seized from Mr. Parnas’s home on October 9, 2019, stamped USAO_00072469 through USAO_00073221, and the complete extraction of Parnas’s iPhone 11, seized from Mr. Parnas upon his arrest on October 9, 2019, stamped USAO_95359,” Bondy wrote. “These materials fall within the scope of the September 30, 2019 letter request and October 10, 2019 subpoena of the United States House of Representatives’ Permanent Select Committee on Intelligence (HPSCI), in connection with the presidential impeachment inquiry.”

“The Government does not object to Mr. Parnas producing USAO_00072469 through USAO_00073221 and USAO_95359 to HPSCI, subject to receiving approval from the Court,” he continued. “At present, we do not know whether we intend to produce the entirety of the materials, or a subset filtered for either privilege or relevancy. If a subset, we will inform the Court and Government as to what we have actually have produced.”

One bit of potential testimony they will no doubt want to corroborate involves House Intel Ranking Member Devin Nunes (R-Calif.). You may remember that Bondy gave information to CNN that triggered a Nunes lawsuit.

Nunes sued over claims that he went to Austria in 2018 and met Viktor Shokin, and communicated with Parnas in Dec. 2018 “around the time of the ‘Vienna Trip.’” Nunes and his attorney said the trip “never happened.” Shokin is the former Ukrainian Prosecutor General that Joe Biden bragged about getting fired. Republican Senators also believed Shokin was corrupt and wanted him ousted.

Calls logs released in the House Intel Committee’s impeachment report showed that Nunes, Parnas, and Giuliani spoke by phone. The logs from April 12, 2019 showed Parnas called John Solomon — the then-Hill columnist who brought to the mainstream the Joe-Biden-Hunter Biden-Burisma narrative pushed by President Donald Trump, Shokin, Giuliani, Parnas, and more. The logs also showed Parnas had a call with Nunes that lasted for more than eight minutes. Parnas then called Solomon back.

The “-1” number that showed up in logs appears to belong to the president.

Bondy previously said that, in light of the call records, Nunes should have recused himself from the House Intelligence Committee’s impeachment hearings.

Parnas and fellow Giuliani associate Igor Fruman were each hit with two counts of conspiracy, one count of making false statements, and one count of falsification of records. They were instrumental in Giuliani’s efforts to convince the Ukrainian government to commit publicly to investigations of Joe Biden, Hunter Biden and Burisma. The charges are related to a “scheme to funnel foreign money” to Republican candidates (alleged campaign finance violations).

David Correia, a co-founder of Fraud Guarantee, and Andrey Kukushkin were also ensnared in the criminal probe. Correia and Kukushkin were charged with one count of conspiracy.

All defendants have pleaded not guilty.

Prosecutors are also aware of and concerned about Parnas’s connection to Dmytro Firtash, a Putin-connected Ukrainian oligarch involved in efforts to dig up dirt on the Bidens. Firtash is under indictment for bribery in the U.S., but has not been extradited.

Parnas letter to judge by Law&Crime on Scribd