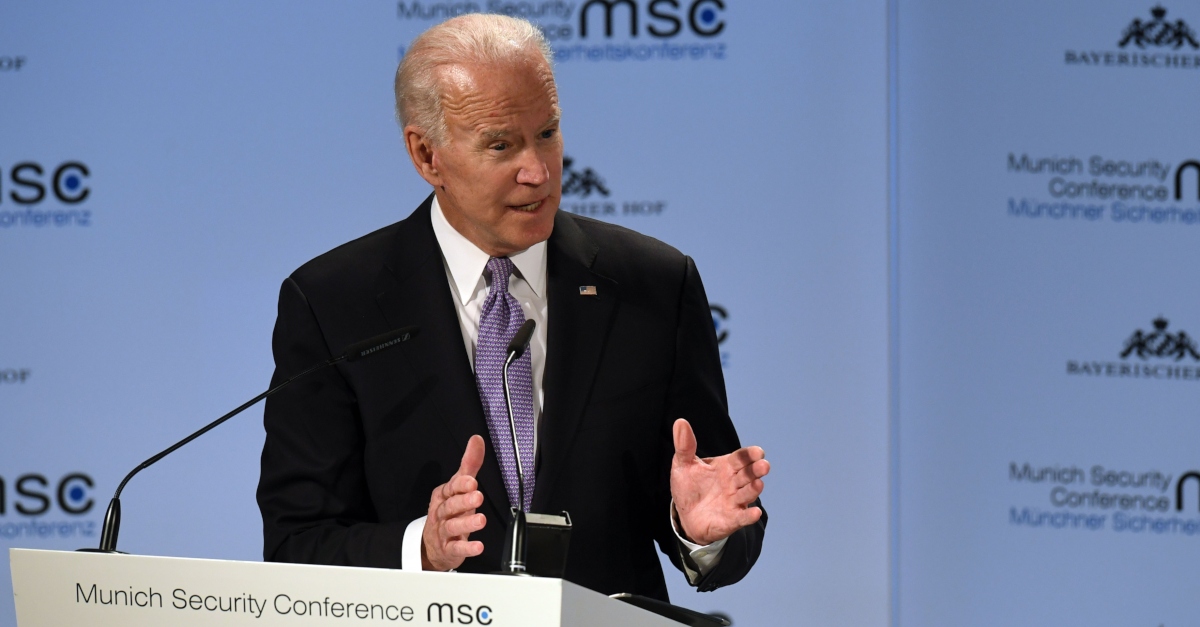 A recently unearthed letter from 2016 shows how then-Vice President Joe Biden had strong Republican support for his push to reform the public prosecutor’s office in the Ukraine.

Released by Republican Senator Rob Portman (R-Ohio), and noted by CNN this morning, the letter is addressed to former Ukrainian president Petro Poroshenko and signed onto by Senator Ron Johnson (R-Wisc.) and then-senator Mark Kirk (R-Ill.). Three Democratic senators also attached their names to the correspondence.

“As members of the Senate Ukraine Caucus and strong supporters of your government, we write to express our concern regarding the recent resignation of Minister of Economy Aivaras Abromavičius and his allegations of persistent corruption in the Ukrainian political system,” the brief and bi-partisan message begins.

The letter goes on to laud the apparently small but important steps made by “Abromavičius and his team” to address “endemic corruption” in the Ukraine such as “tough but necessary economic reforms” and the promotion of “more openness and transparency in government.”

The allegations about continued problems throughout the Ukrainian government “raise concerns about the enormous challenges that remain in [Poroshenko’s] efforts to reform the corrupt system,” the senators said.

The letter makes clear the ultimate reason the U.S. is interested in a putatively corruption-free Ukraine:

Succeeding in these reforms will show Russian President Vladimir Putin that an independent, transparent, and democratic Ukraine can and will succeed. It also offers a stark alternative to the authoritarianism and oligarchic cronyism prevalent in Russia. As such, we respectfully ask that you address the serious concerns raised by Minister Abromavičius.

The need for an additional anti-Russian bulwark has long been a goal of U.S. foreign policy traditionalists and after the Obama administration successfully dislodged the Ukraine from Russia’s orbit via the support of far-right neo-Nazis during the 2014 Euromaidan protests, the bi-partisan consensus congealed around this long sought after goal.

In other words, concerns about Ukrainian “corruption” offered U.S. foreign policy plotters in both parties a tidy way of countering Russian hegemony. So, when Biden infamously bragged about having a corrupt Ukrainian prosecutor removed at the behest of the Obama administration, such behind-the-scenes efforts were largely uncontroversial amidst the Washington, D.C. elite—in fact they were telegraphed more or less out loud.

“We similarly urge you to press ahead with urgent reforms to the Prosecutor General’s office and judiciary,” the Republicans and Democrats demand of the foreign leader.

In fact, the letter’s language dealing with the judiciary itself echoed a speech Biden gave to the Ukrainian parliament just a few months earlier.

“It’s not enough to set up a new anti-corruption bureau and establish a special prosecutor fighting corruption,” Biden told the foreign legislators. “The Office of the General Prosecutor desperately needs reform. The judiciary should be overhauled.”

Portman himself reinforced the sentiments of the letter sent by his office in a tweet later that same day.

“Ukraine’s US friends stand w/#Ukraine in fight against corruption,” Portman tweeted. “Impt to continue progress progress made since #EuroMaidan.”

And one month after the Republican-drafted letter was sent, Viktor Shokin, the onetime chief prosecutor at the heart of the current Ukraine scandals was out of a job.