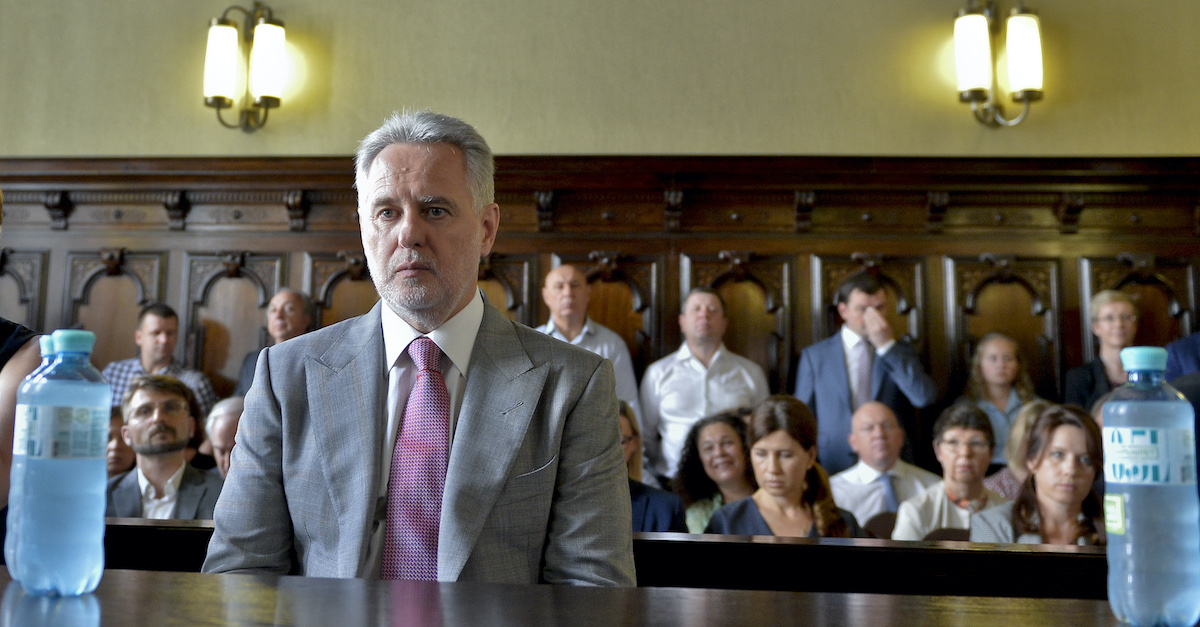 Ukrainian oligarch Dmytro Firtash looks on prior to a public hearing at the supreme court in Vienna on June 25, 2019.

A Ukrainian oligarch under indictment for bribery in the U.S., whose success in the natural resources and raw materials sectors was apparently “built on remarkable sweetheart deals brokered by associates of Russian leader Vladimir Putin,” deposited $1 million into an account belonging to the wife of indicted Rudy Giuliani associate Lev Parnas through Swiss attorney Ralph Isenegger, prosecutors with the Southern District of New York (SDNY) alleged Tuesday.

According to Assistant U.S. Attorney Rebekah Donaleski, Parnas concealed the $1 million “loan,” which was deposited in the name of Svetlana Parnas. The government submitted this information in an attempt to revoke the Ukrainian-Floridian businessman’s bail ahead of trial. Prosecutors wonder if this was really a loan to buy a home or a loan disguised as a payment from Ukrainian oligarch Dmytro Firtash.

NBC News: Federal prosecutors say that an attorney for indicted Ukranian Oligarch Dmytro Firtash (and Paul Manafort associate) is behind the $1 Million loan to Lev Parnas.

Further, they raise questions as to whether this really was a loan or a loan disguised as a payment.

“The government points to several factors and they are concerning,” noted U.S. District Judge Paul Oetken, “They focus on the financial statements and alleged misstatements made.”

The government’s revelation was worth several megabytes worth of digital ink but ultimately not quite sensational enough in legal terms.

“There’s certainly lots of suspicious activity here,” Oetken added, “but I don’t know if that’s a clear and intentional misstatement,” he said of the unmentioned million dollar payment before declaring: “I find that they’re not obvious misstatements.”

According to the Reuters wire service, Parnas previously worked with his indicted co-conspirator Igor Fruman “in an unspecified capacity for Firtash” before joining the Ukrainian billionaire’s legal team as a translator.

In 2014, the Department of Justice (DOJ) leveled charges against Firtash for his alleged role in a bribery scheme to sell titanium to beleaguered plane manufacturer Boeing, alleging he was an “upper-echelon [associate] of Russian organized crime.”

In 2008, according to court records, Firtash attempted to redevelop the Drake Hotel with eventual Trump 2016 campaign chair Paul Manafort. That deal fell through but Firtash at one point transferred $25 million into escrow in order to secure the bag.

Firtash’s alleged (and denied) ties to organized crime were originally revealed by way of a secret U.S. State Department cable released in 2010 by transparency organization WikiLeaks.

Writing in 2008, then-ambassador Bill Taylor wrote of Firtash: “he acknowledged ties to Russian organized crime figure Semion Mogilevich, stating he needed Mogilevich’s approval to get into business in the first place.”

In July, Firtash made a substantial change to his legal representation–hiring Fox News legal guest couple Joe diGenova and Victoria Toensing to represent him against those bribery charges. Firtash has not been extradited to the United States, and continues to fight that.

The move was considered to be telling due to the power couple’s close ties to the Trump administration–particularly President Donald Trump’s personal lawyer Rudy Giuliani. Toensing and diGenova also represent controversial conservative investigative journalist John Solomon–whose stories in The Hill are widely credited with provoking the 45th president’s obsession with Hunter Biden‘s business in the former Soviet satellite.

Firtash is also said to be directly implicated in Giuliani’s efforts to obtain dirt on the Biden family.

In November, he told the New York Times that Giuliani, Parnas and Fruman promised to utilize connections at DOJ in order to help him while he helped them pursue and obtain evidence supporting the Biden corruption narrative.

This is very big DOJ news re: Giuliani-Firtash-Putin.

I don't want to hear any more about "impeach/withhold" or "impeach/delay trial" or "conditional impeachment."

Giuliani, who is under investigation in the Southern District of New York, previously said that he was paid $500,000 to advise Parnas’s company, Fraud Guarantee.