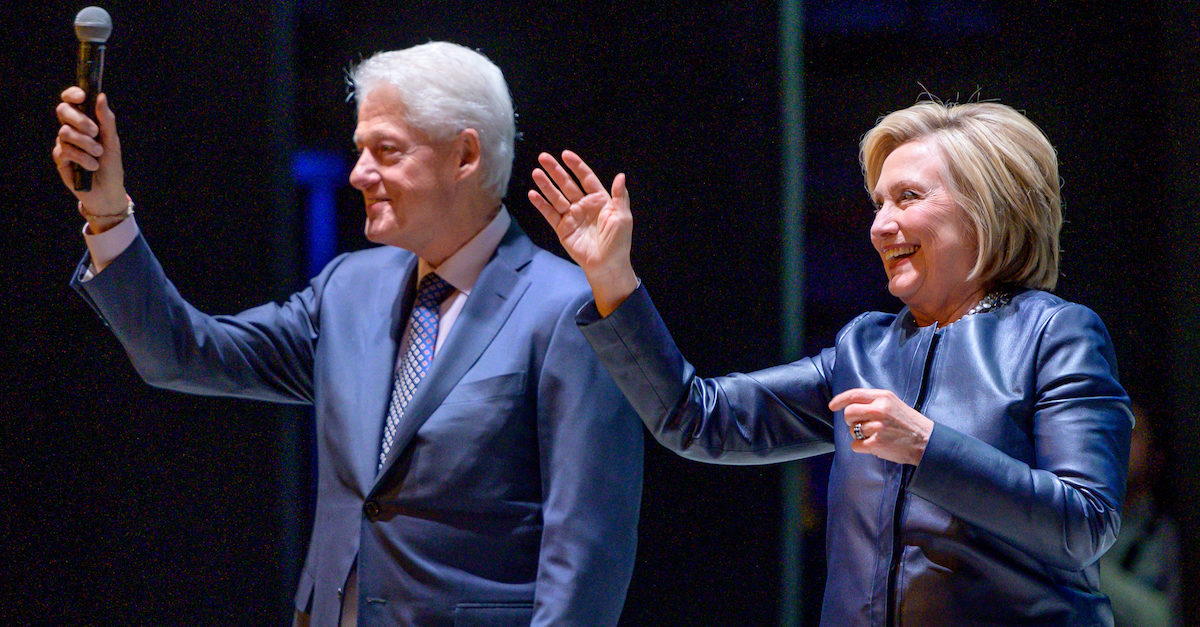 Former President of the United States Bill Clinton with his wife, Former Secretary of State and presidential candidate Hillary Clinton on Stage during “An Evening With The Clintons” at Beacon Theatre on April 11, 2019 in New York City.

RELATED: DOJ Clinton Probe That Trump Desired Has Reportedly Found ‘Nothing Worth Pursuing’

Durham was hand-picked by U.S. Attorney General Bill Barr in May 2019 to oversee an administrative review of the FBI’s “Crossfire Hurricane” investigation into Trump’s 2016 presidential campaign. By Oct. 2019, it was confirmed that the investigation would also be looking into possible criminal conduct and include actions taken under former special counsel Robert Mueller’s Russia probe.

Law enforcement officials familiar with the matter told the Times that Durham’s strategy of comparing investigations was extremely atypical and has only further exacerbated concerns that the purpose of the probe is to target President Donald Trump’s political enemies rather than uncover evidence of wrongdoing.

“The approach is highly unusual,” several people said to have been briefed on the investigation told the newspaper. “Though the suspected crimes themselves are not comparable — one involves a possible conspiracy between a presidential campaign and a foreign adversary to interfere in an election, and the other involves potential bribery and corruption — and largely included different teams of investigators and prosecutors, Mr. Durham’s efforts suggest the scope of his review is broader than previously known.”

Further emphasizing Durham’s unorthodox tactics, the report stated that multiple former law enforcement officials “declined to talk to Mr. Durham’s team about the foundation investigation because they felt the nature of his inquiry was highly unusual.”

Since the probe began, critics have derided it as politically motivated and redundant, particularly in light of in-depth reports on the matter from the Justice Department Inspector General’s Office and the Senate Intelligence Committee. Additionally, Barr, who has long maintained that U.S. intelligence agencies “spied” on a presidential campaign, has been publicly pressured by President Trump to use the Durham investigation to prosecute his political enemies (although Barr has refuted that assertion, claiming he feels no pressure).

Senate Democrats earlier this month even demanded an investigation into whether Durham’s probe violated DOJ policy meant to insulate criminal inquiries from being launched for political means after top Durham aide Nora Dannehy resigned. Dannehy reportedly quit due to concerns that investigators were being pressured by Barr to come up with results before the November election, ostensibly so investigative findings—regardless of their completeness—could be used for maximum political impact.