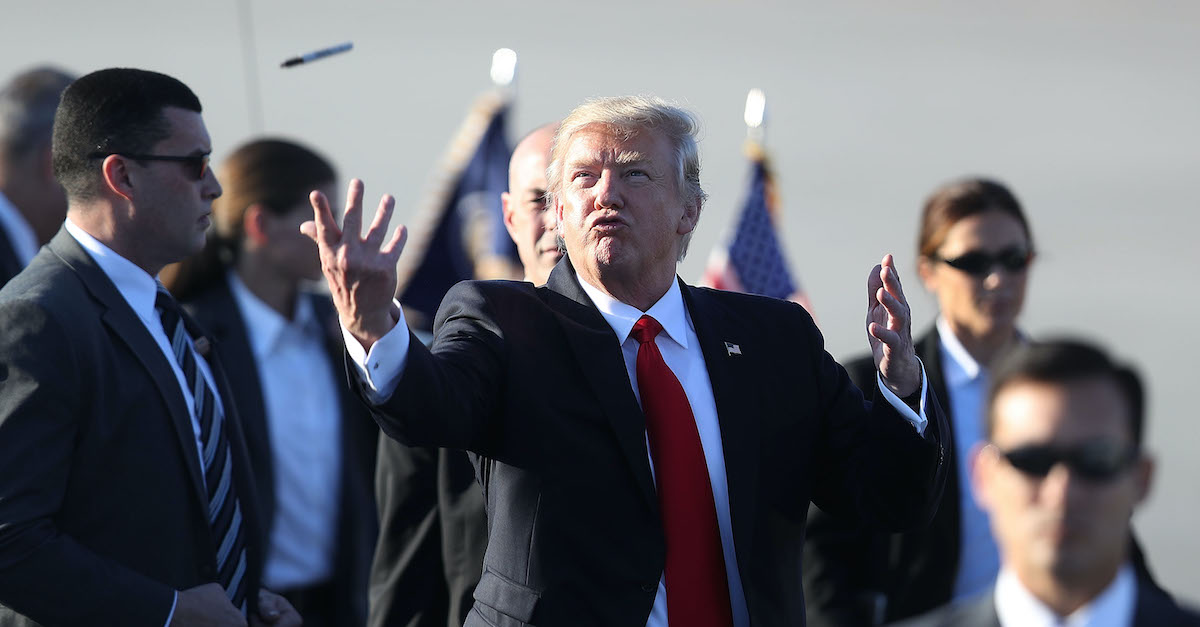 We are weeks away from an Election Day, the results of which may not be known until seven days later—the day a possibly eight-justice Supreme Court will hear the Trump administration’s arguments in favor of eliminating Obamacare during a pandemic given the eradication of the individual mandate. President Donald Trump and his spokespersons have been pressed for answers, whether at a town hall or on cable news, about whether the administration has a plan for replacing Obamacare and what that might be. The White House has repeatedly said it has a plan, but has not revealed specifics—until now?

Bloomberg reported that the president is going to focus in a “major” way on healthcare during a speech in North Carolina on Thursday. The president’s solution appears to be the Sharpie and Twitter account version of Barack Obama’s “pen and phone“—a turn of phrase oft-repeated and pilloried on the right.

Replace the words “best education possible” with “most tremendous healthcare you’ve ever seen.”

President Trump has been in office for more than three years and, to date, no one has seen a substantive legislative substitute for Obamacare. Amid increasing demands for such a substitute, Bloomberg is reporting that President Trump is expected to unveil a “lengthy” executive order—not the “long-promised comprehensive replacement plan for Obamacare”:

Facing Democratic criticism that he’s failed to offer a replacement for the Affordable Care Act that would still protect sick people from being denied health insurance, the president is expected to issue a lengthy executive order that will seek to reduce surprise medical bills, according to two people familiar with the matter. The new rules are intended to affect every hospital in the nation, a third person said.

The executive order is also expected to include language that purports to bolster protections for people with pre-existing conditions, according to the three people.

He will emphasize improving consumer choice, affordability, and quality of care for vulnerable groups. And the president will portray previous actions he’s taken to reduce drug costs, expand tele-medicine, and assist vulnerable groups like people with kidney disease as indicative of his approach toward a more ambitious health care overhaul in a second term.

In summary, based on the above: in the interest of re-election, the president will announce on Thursday that he plans on replacing the Affordable Care Act with an executive order mandating affordable care; he will not announce Republicans’ version of comprehensive healthcare reform because the White House is either not prepared to propose such legislation or it doesn’t exist.

As recently as August, the National Review declared that Trump had ushered in the “Return of Pen-and-Phone Constitutionalism.” The Wall Street Journal editorial board agreed.

“The good news is that President Trump on Saturday escaped the trillion-dollar terms of surrender demanded by House Speaker Nancy Pelosi,” the editorial board began. “The bad news is that he followed the Barack Obama method with executive orders, one of which stretches the law in a way that a future progressive President will surely cite as a precedent.”