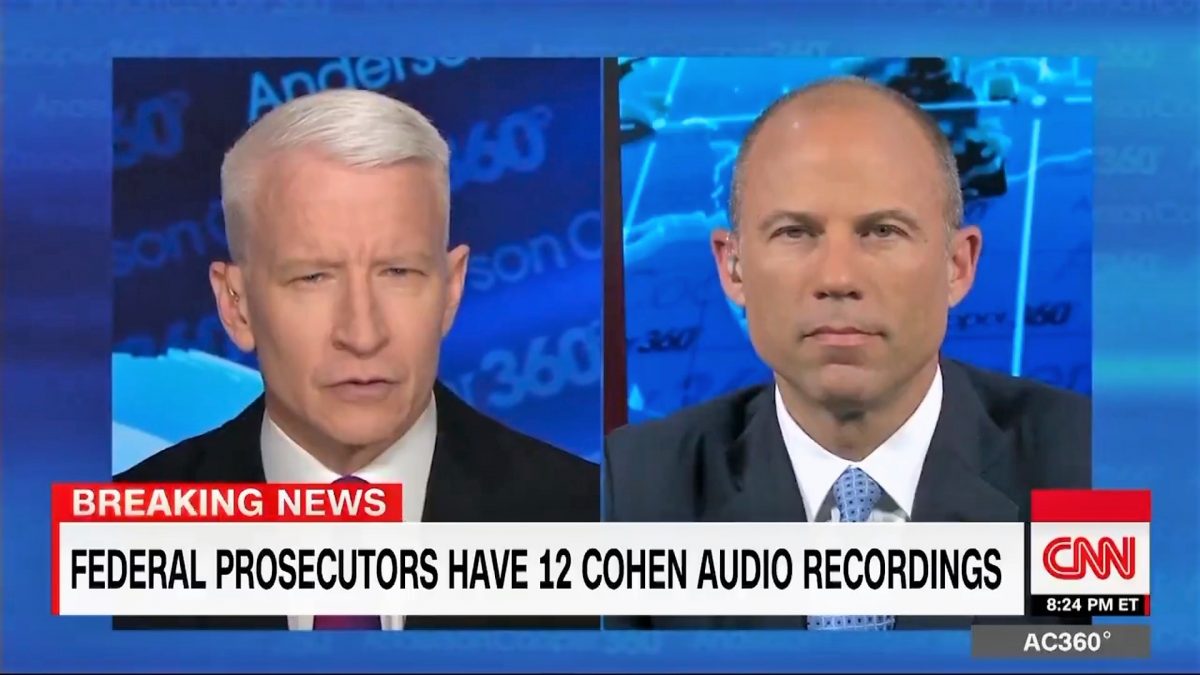 Monday night on CNN, attorney Michael Avenatti laid out his hopes and dreams for Michael Cohen. The appearance came after news that Avenatti just happened to bump into Cohen at a New York City restaurant. There, Avenatti said the two had a “cordial, lengthy, and frank discussion,” but Avenatti denied claims that he “pitched” to Cohen that the two should “team[] up” on Trump.

“Yes, there was more than one recording of a conversation that Michael Cohen had with the President,” says @MichaelAvenatti, adding that he is “not willing” and “can’t say” how he knows that information https://t.co/7DoZ8p6BPn pic.twitter.com/ka6WNDiuur

As we have previously analyzed, the context matters. Under the Rules of Professional Conduct, Avenatti and Cohen can talk all they want — so long as they aren’t talking about whatever the two are contesting in a court of law. Since Avenatti’s client is suing Cohen, and since Cohen is represented by counsel, Avenatti has to go through Cohen’s attorneys unless they allow otherwise. It seems clear from Avenatti’s CNN interview that the two talked about more than the standard friendzone topics of weather and what was on the menu that night. But Avenatti, when pressed, refused to go into details.

What, then, did they discuss? Right now, we don’t know. However, in response to additional questions about whether Avenatti can cooperate with Cohen, Avenatti issued a wish list:

CNN’s Anderson Cooper then asked if Avenatti would demand information from Cohen about an alleged threat to Stormy Daniels in Las Vegas. Avenatti said, yes, information about that threat — if Cohen had any — would be a “precondition” to any cooperation with Cohen.

We would need to know exactly what happened relating to that incident in Vegas . . . that’s one example . . . of a number of examples that we would need to get to the bottom of. Another would be the payment of the $130,000; how that money flowed. Was there an agreement for reimbursement? Did he discuss with Donald Trump the campaign finance violation potential? There is a long list of answers that we would need to get before we agreed to do anything with Michael Cohen.

Avenatti and his increasing number of Twitter followers (641,000+ at present) would probably love to have that information. Avenatti seems to think he can get it. In emails to Law&Crime, Avenatti said that he “seriously doubt[s]” that any Trump/Cohen conversations were privileged.

“I doubt that Michael Cohen was often providing legal services to Mr. Trump and thus their communications would not be protected,” he explained. And, if a privilege does apply, Avenatti thinks a “crime fraud exception would likely apply.” (We previously analyzed that situation in a related but separate context here.)

Avenatti appears to be raising the age-old question: who is the client?   The payment made to Daniels was through Cohen’s shell company, Essential Consultants, LLC. Cohen owned the company himself and claimed he was representing the entity–not Trump–in the deal. If Cohen was actually representing his own company in his various talks, Cohen might — under this theory — be able to release and discuss any Trump conversations he wants.

[Image via screen capture from CNN.]