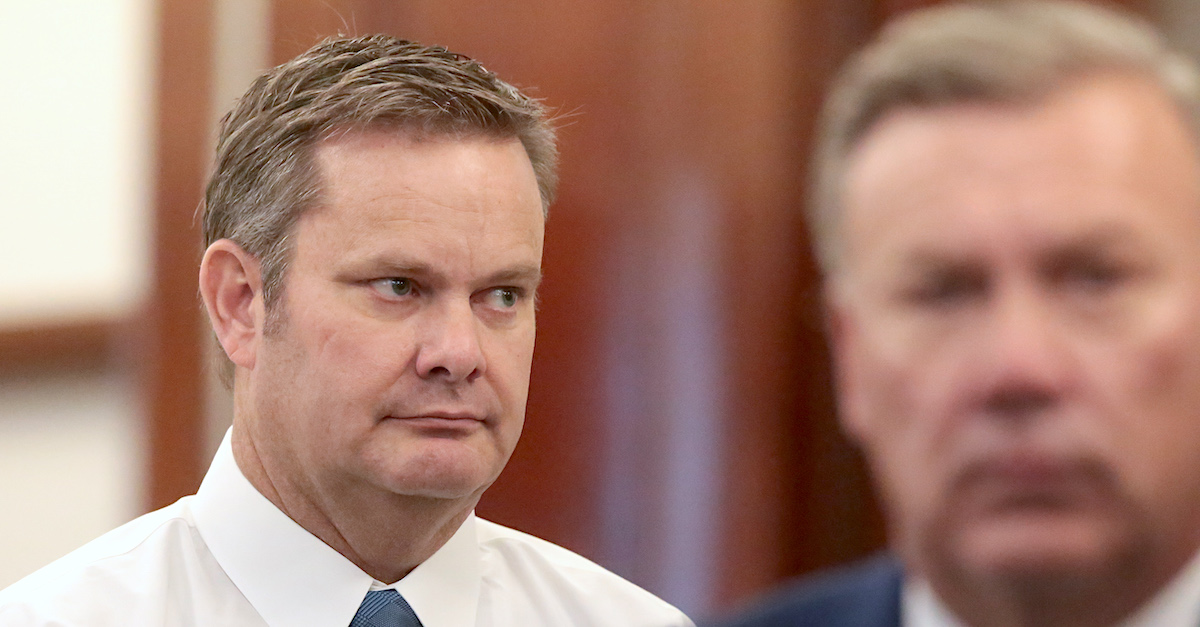 Chad Daybell is seen in a file photo taken on August 3, 2020 in Fremont County, Idaho.

Prosecutors in Fremont County, Idaho on Thursday announced that they intend to seek the death penalty against Chad Daybell.  That’s according to an entry in an online court docket and other court papers obtained by Law&Crime.

According to those records, Chad Daybell is accused of eight counts in sum total:  three counts of murder, two counts of criminal conspiracy, two counts of insurance fraud, and one count of murder conspiracy. Chad and his wife Lori Vallow Daybell are charged in Idaho with killing Tammy Daybell, Chad’s first wife, and Lori’s two children:  Tylee Ryan, 16, and Joshua “JJ” Vallow, 7.

The death penalty documents say prosecutors arrived at a four-fold rationale for seeking the ultimate punishment: (1) the three alleged murders were “committed for remuneration;” (2) the alleged murders were “especially heinous, atrocious, cruel, or manifesting exceptional depravity;” (3) the alleged murders or the “circumstances surrounding their commission” involved the defendant’s exhibition of “an utter disregard for human life;” and (4) that the defendant exhibited “a propensity to commit murder and will probably constitute a continuing threat to society.”

Those four findings are among the eleven possible yet separate aggravating circumstances that a jury could consider before issuing a death sentence under Idaho Code § 19-2515(9)(a)-(k).  Only one of the aggravating circumstances is necessary for a death sentence, so prosecutors have afforded themselves some leeway by suggesting multiple paths by which a jury could ultimately recommend death row.

Prosecutors briefly explained the decision to seek capital punishment in a statement to East Idaho News:

Today we filed our Notice of Intention to seek the death penalty against Chad Daybell. Our process in making this determination was lengthy and comprehensive.

We conferred with those immediate family members of JJ Vallow, Tylee Ryan and Tammy Daybell, who have indicated a willingness to speak with us and allowed them an opportunity to provide their input if they wished to do so.

The ultimate decision to seek capital punishment rests with the State, and after completing the entire process, we determined that the nature and magnitude of these crimes warrant the possibility of the highest possible punishment.

This determination applies only to Chad Daybell.

The death penalty documents are yet another serious turn of events for the alleged doomsday cult couple.

Lori Vallow is also charged in the Idaho killings.  Questions involving her competency swirled in Idaho as authorities in Arizona indicted her for allegedly murdering her fourth husband, Charles Vallow, in that state.  Police records on file in Arizona suggest that Lori believed Charles Vallow needed to die so that she could marry Chad Daybell to fulfill a religious prophecy.  Chad Daybell is not charged in Charles Vallow’s death.

Chad Daybell is scheduled for a pretrial hearing in Idaho on Sept. 30th.  His trial is currently scheduled to begin on Nov. 8th.

Idaho has executed three people since 1976.

Read the relevant documents below: