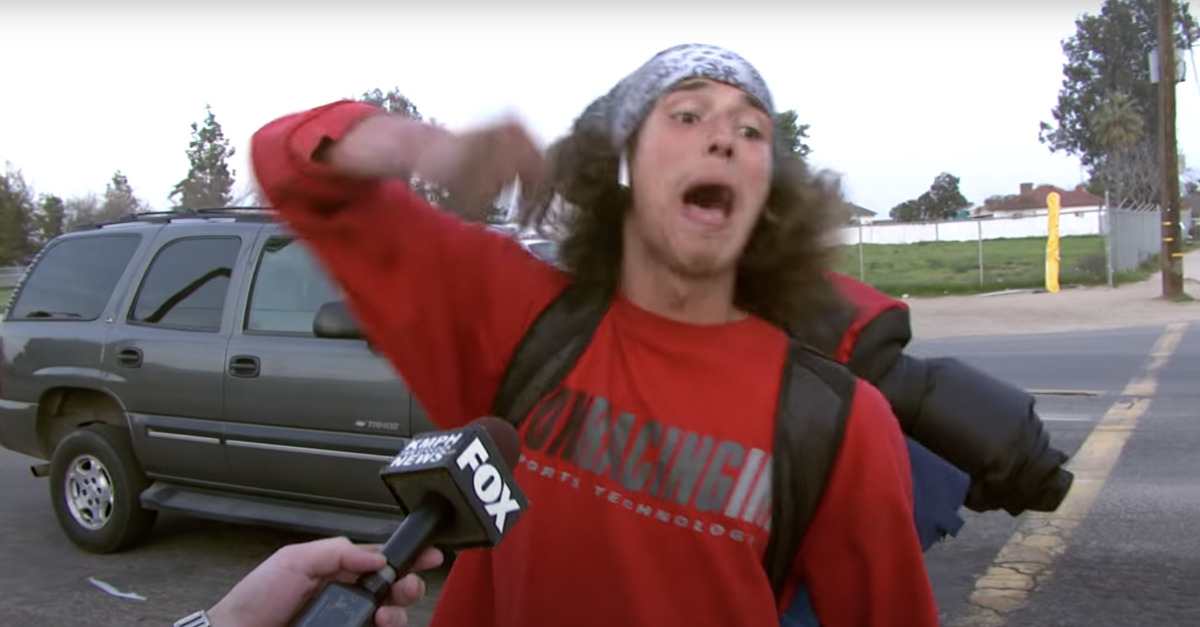 A microcelebrity whose tonally jarring local television news interview went viral nearly a decade ago will remain in prison for murder, an appeals court in New Jersey determined on Thursday.

Caleb McGillvary, known online and to his fans as “Kai the Hitchhiker,” beat 73-year-old Garden State attorney Joseph Galfy to death in 2013—and was convicted for it six years later, in the spring of 2019.

After meeting in Times Square in nearby New York City, McGillvary killed the septuagenarian officer of the court in the lawyer’s own home. The defendant has long claimed that he was fighting back against a sexual assault while sleeping, possibly drugged, when he killed the man who was found wearing only his socks and underwear.

Police and prosecutors claimed the sexual encounter was consensual, however, and that McGillvary had killed with premeditation.

McGillvary, at the time, strenuously pushed back against the idea that he would ever have sex with someone who looked like the lawyer–in line with a general denunciation of the government’s case.

The government pounced upon McGillvary’s inconsistent statements in his initial police interview and during his subsequent trial, when he raised the affirmative defense of self-defense. An affirmative defense in law is an admission that a defendant has committed a certain act but that there are mitigating factors which might result in the lack of legal sanction for otherwise criminal behavior.

In a 36-page decision, a two-judge of the New Jersey Superior Court from Union County noted some of those alleged discrepancies:

Defendant could not recall the whereabouts of the things he wore during the alleged sexual assault, which he said were soaked in blood and urine. He wore different clothes when speaking to the detectives in Philadelphia, but “[a]t some point [he] had to have [changed] because when [he] came to,” he was dressed differently. He also confirmed that in a photograph taken with an employee at the diner the night after the alleged sexual assault he was wearing different clothing. He claimed he was unaware that Galfy died until informed by the detectives.

“The jury heard and rejected defendant’s testimony regarding the defenses of involuntary intoxication and self-defense,” the court explained later, dismissing defense complaints that the judge discussed the dead lawyer’s injuries.

“The judge opined the injuries demonstrated that the assault was far more than just an effort to thwart a sexual advance,” the opinion notes. “Moreover, defendant’s conduct following the attack, including his change of clothing and hairstyle, and his ‘remarkable memory as to extraordinary details’ demonstrated that defendant was not believable. Despite remembering everything regarding his first meeting with Galfy, and the topics of their conversation, he could not remember the whereabouts of his stained clothing.”

“The court further instructed on self-defense and involuntary intoxication,” the judges go on. “Therefore, the jury was fully apprised and aware of their options to convict defendant of the lesser-included crimes but decided instead that the evidence supported [serious bodily injury] murder.”

McGillvary, in multiple motions (both self-authored and penned with the help of an attorney who was eventually fired), lodged 15 defense complaints in total. Most of those claims were rejected in turn by Judges Carmen H. Alvarez and Richard Geiger.

Some of the defense’s claims, however, were summarily rejected with somewhat blistering commentary.

Again from the opinion at length:

The [trial] judge observed defendant had “been hostile, aggressive, noncompliant, ha[d] repeatedly ignored serial admonitions from [the] [c]ourt over and [over] again,” and that “his conduct ha[d] been serially contemptuous” and “deviously calculating.” … Additionally, during an “unrestrained outburst” outside the presence of the jury, defendant described his trial as a “kangaroo court.” Even as the judge was rendering his decision on defendant’s motion to represent himself, defendant continuously interrupted him. Accordingly, the judge’s decision was not an abuse of discretion.

“Any other claim of error not explicitly addressed in this opinion is too lacking in merit to warrant further discussion,” Alvarez and Geiger noted in semi-caustic fashion. “Affirmed.”

The man briefly-beloved online went viral several months before his murder case when he gave an interview following an intervention on behalf of a California utility worker. Using animated movements and speaking in a SoCal-sounding drawl, McGillvary described using a hatchet to beat back the attacker and to defend two other women.

“I fuckin’ ran up behind him with a hatchet,” he told local Fox affiliate KMPH after those heroics. “Smash! Smash! Suh-mash! It was fuckin’ gnarly man. It was like the biggest wave I’ve ever ridden.”