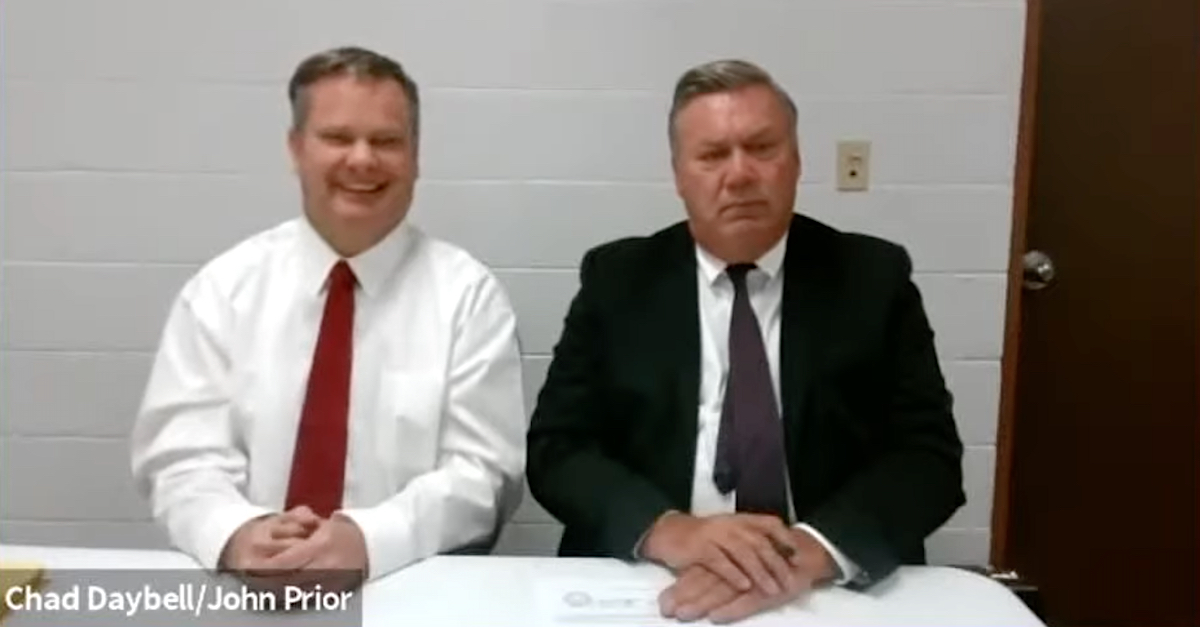 A screen grab of video from a remote court hearing shows Chad Daybell grinning in court during a May 26, 2021 initial appearance.

Recently accused murderer Chad Daybell on Wednesday smiled and chuckled in court while electronically facing a judge for the first time since a grand jury indicted him on a series of crimes which could, in theory, result in his execution.

Judge Faren Eddins asked Daybell, who seated next to defense attorney John Prior, if he could see and hear the remote proceedings without trouble.

“This is the date and time for an initial appearance,” the judge said while commencing the roughly ten-minute-long proceeding. “Mr. Daybell, can you hear me okay?”

“Yes,” Daybell responded. “Can you hear me?”

“You need to speak a little bit louder Mr. Daybell,” the judge said.

Daybell exhibited what appeared to be a small and perhaps nervous laugh while leaning forward.

“Yes, I can hear you,” the defendant said.

Such exchanges to check the aptitude of videoconferencing software have become increasingly common as remote hearings have become common over the last year.

Eddins explained the legal reason for the initial appearance: to advise Daybell of his rights, to set dates for future hearings, and to ensure counsel was retained.  The specifics are laid out in Idaho Rule of Criminal Procedure 5.

“I do,” Daybell responded when Eddins asked if he understood his rights.

Prior affirmed that he explained Daybell’s rights prior to the hearing.

Daybell waived a formal reading of the indictment; the judge, however, did read the list of charges contained within the eleven-page document.  It contains the following relevant counts:

Count (7) contained in the same indictment applies only to co-defendant Lori Vallow Daybell.

Several of the counts carry a possible death sentence if the state decides to seek such a punishment.  If Daybell is convicted, any prison terms could run consecutively (back to back) or concurrently (at the same time), the judge confirmed.

Daybell sat stoically through most of the hearing.

Prior confirmed that Daybell had retained his office for representation on the new counts.

An arraignment before a district court judge is scheduled to occur on the morning of June 9.  Eddins said it was unclear whether the hearing would be conducted remotely or in person.  A final time was not set.  A bail amount was also not set.

“Nothing further, Your Honor; may we be excused?” Prior asked at the end of the approximately ten-minute hearing.

“You may,” the judge said while thanking the participants for appearing and adjourning the matter.

Lori Vallow Daybell appeared separately for her initial appearance; her attorney asked the court to reschedule her matter on a different day.

The judge agreed to move the date of the appearance based on information provided separately to the court. He did not elaborate on precisely what that information was.

Watch the Chad Daybell hearing below:

Read the charging document below.

[image via screen capture from YouTube/KTVB-TV]