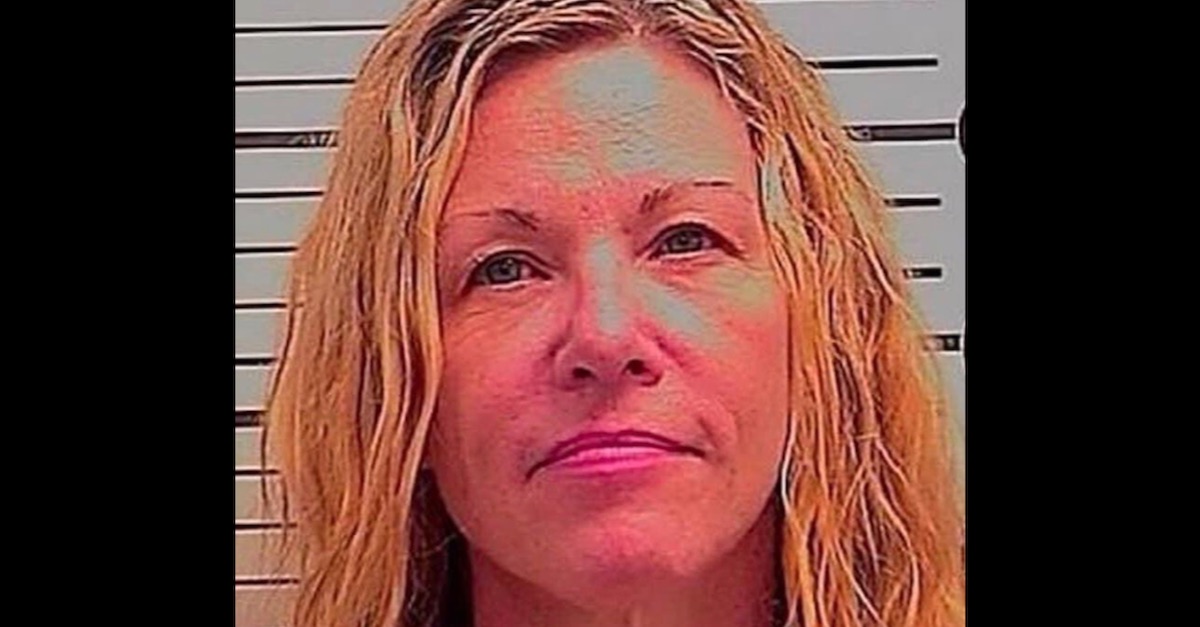 Lori Vallow Daybell, a doomsday-cult-connected mother of two dead children, was indicted in the alleged murder of her ex-husband Charles Vallow by a grand jury in Arizona late Tuesday afternoon.

“Lori N. Vallow, on or about July 11, 2019, with the intent to promote or aid the commission of an offense, to-wit: First Degree Murder, agreed with Alexander Cox that at least one of them or another would engage in conduct constituting the offense of First Degree Murder,” the brief, two-page indictment obtained by Law&Crime reads in part.

The document refers to Vallow Daybell by her previous name.  She has since married Chad Daybell.

The State further alleges that the offense charged in this count is a dangerous felony because the offense involved the discharge, use, or threatening exhibition of a gun, a deadly weapon or dangerous instrument and\or the intentional or knowing infliction of serious physical injury upon Charles Vallow, in violation of A.R.S. §§ 13-105 and 13-704.

“Complex, difficult cases of this nature take time to properly investigate and solve,” County Attorney Allister Adel said in a statement. “I appreciate the tremendous number of hours the dedicated officers of the Chandler Police Department have invested, and my office is equally committed to bringing those responsible for Charles Vallow’s death to justice.”

Lori Vallow Daybell was accused of the crime by police in Chandler, Ariz. earlier this year. The indictment makes those charges formal.

Prosecutors in Maricopa County, Ariz. believe that Daybell (who has pointedly made an issue of her name change in the past) conspired with her brother, Cox, to have her late husband killed.

On July 11, 2019, Cox called 911 dispatchers and reported that he had shot and killed his brother-in-law, Charles Vallow, who died at the scene of the shooting.

Cox died mysteriously in November 2019. He told investigators that the shooting was in self-defense.

Cox is also a suspect in the 2019 drive-by-shooting attempt on the life of Brandon Boudreaux, the ex-husband of Daybell’s niece, Melani Boudreaux Pawlowski. The would-be victim is one of the major sources of information into the religious practices of the Daybell clan.

Both shootings — the murder of Charles Vallow and the attempted murder of Brandon Boudreaux — have long been thought to be connected to the cases of seven-year-old Joshua “JJ” Vallow and seventeen-year-old Tylee Ryan. Both of the children were missing for years; their bodies were discovered dead and buried on rural property belonging to Daybell’s fifth and current husband Chad Daybell in Fremont County, Idaho late last Spring.

The dizzying cast of characters and odd occurrences doesn’t stop there.

Melani Pawlowski got her new last name by marrying a man called Ian Pawlowski — who is believed to be cooperating with police through his attorneys — shortly after she and Boudreaux were divorced.

To hear Ian’s side of it, Melani’s religious ideas were initially “harmless at first.” She had acquired them through her relationship with her aunt and Chad Daybell, who married Lori immediately after his wife Tammy Daybell died. Chad Daybell is not officially suspected of her murder, and autopsy results on her cause of death have yet to be released because they are part of a pending investigation — which involved exhuming the dead Tammy Daybell’s body.

Tammy Daybell was still alive when JJ and Tylee were buried, reports indicate.

Brandon Boudreaux, in a custody dispute, relayed the following information – which came from Ian – about those decidedly bizarre religious ideas:

[Melani] explained zombies and her fears about what Chad and Lori stated concerning the original spirits being caught in limbo until the body’s death. She stated that [Boudreaux] had been possessed by a demon or another dark entity sometime after June of [2019]. She was told either through revelation or by Chad . . . that something needed to happen to [Boudreaux] in order for his spirit to progress and for the Lord’s plan to continue. She didn’t take well to the idea of her husband dying as part of the Lord’s plan, but didn’t think action would be taken by anyone.

Read the indictment and the prosecutor’s press release below: