Like a ‘Throwing a Match on a Powder Keg’: Trump Tweetstorm Calls for ‘Liberation’ of States, Mentions 2nd Amendment 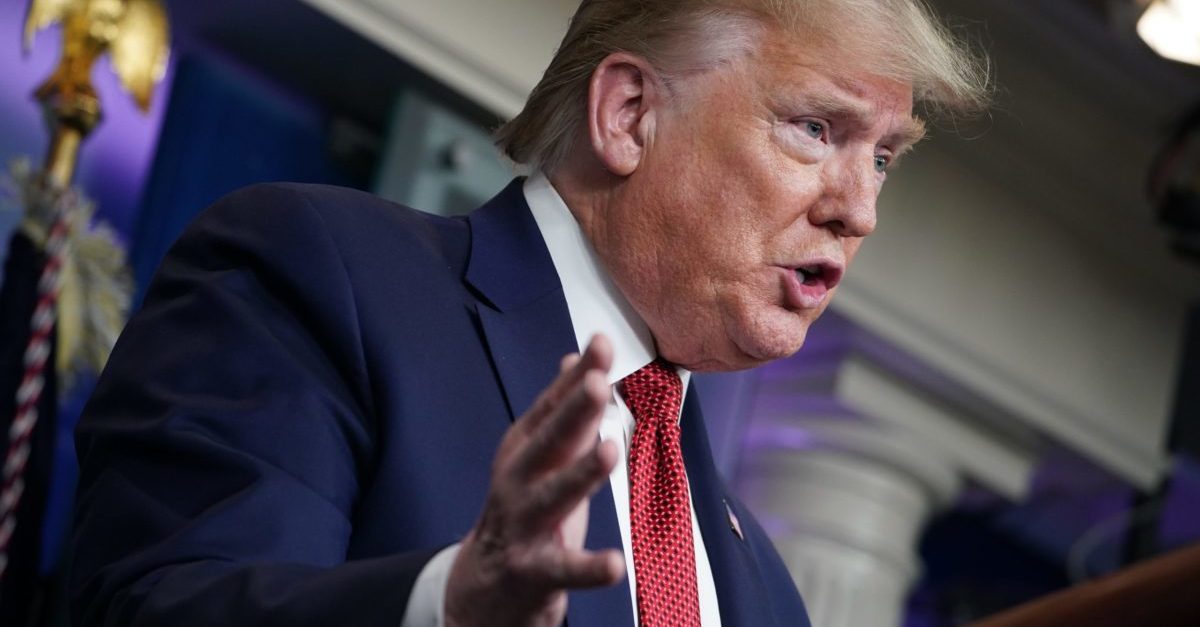 The morning after calling for the reopening of some states in the midst of the COVID-19 pandemic, President Donald Trump on Friday issued a series of tweets calling for the liberation of various states. The tweets focused on Virginia, Michigan, and Minnesota, with the Virginia tweet explicitly saying “LIBERATE VIRGINIA, and save your great 2nd Amendment. It is under siege!”

LIBERATE VIRGINIA, and save your great 2nd Amendment. It is under siege!

The word “liberate” has several definitions. One is “to set at liberty” or to “free” something, especially “from domination by a foreign power.” The other is “to take or take over illegally or unjustly.”

It’s worth noting that “they” (the government) can’t round up your legal firearms during “a major disaster or emergency.” That’s already in federal diaster relief law.

However, Democrats in Virginia have passed strict gun control laws, igniting some outrage there among conservatives. Among the provisions is a so-called “red flag” statute which allows law enforcement to confiscate weapons from people who are a threat to themselves or others.  That part of the law is not too far afield from what President Trump himself suggested after the Parkland, Fla., high school shooting. Law&Crime has analyzed the effectiveness of such laws, which put the onus on imperfect mental health assessments rather than on strict firearm restrictions. Other Republicans have supported the laws because they shift the burden to mental health experts rather than firearms.  Other provisions of the Virginia law include increased background checks and limits on handgun purchases. A full list of the measures is here.

Matthew Gertz of the liberal watchdog group Media Matters For America pointed out that the series of tweets came just minutes after a series of Fox News segments:

For Gertz, it was a nightmare which came true:

Me yesterday: “And if Trump sees Fox’s protest coverage and endorses the effort, social distancing will become even more politically polarized. The hard-won progress in the fight against the virus could evaporate in an instant,” leading to new COVID wave. https://t.co/5qTG9uNoFv

Many reactions from the legal community were similarly unfavorable. At least one of them said the tweets were like “throwing a match on a powder keg.”

Trump & his administration classic example of zero-sum binary thinkers – there is only us (federal government) versus them (States) – he cannot colloborate even when lives depend on it & people who cannot colloborate can never lead.

Remember when Obama was vilified for saying that if he had a son he might have looked like Trayvon Martin? Where are those self-righteous individuals now with the president not-so-subtly suggesting people should “liberate” their states amidst a global pandemic?

It is. This incendiary language is potentially throwing a match on a powder keg.

These were far from the only reactions (“Liberate,” “Liberate America,” etc. are trending far and wide at the time of this writing).

The president appears to be encouraging unrest in several states amid a pandemic that’s killed at least 33,318 Americans. pic.twitter.com/cEEtknuuoS