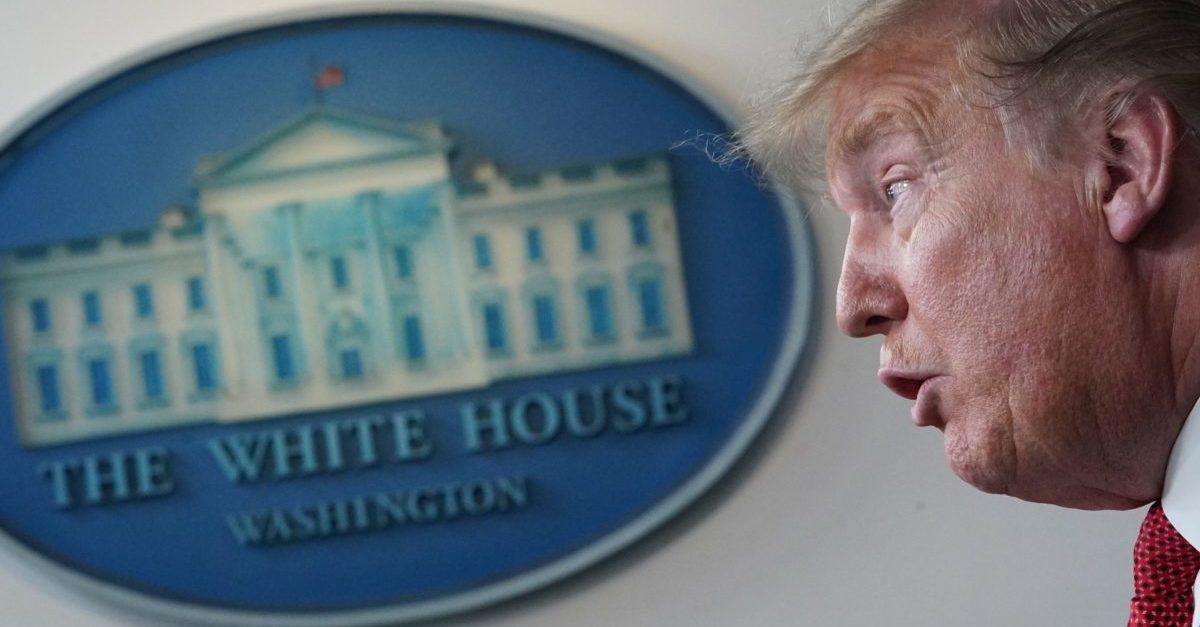 President Donald Trump‘s guidelines for “Opening Up America Again,” released Thursday, do three legally critical things. First, they cite absolutely no federal laws. Second, they admit that governors are in charge of opening states. Third, they ignore a very important federal law that is already on the books and shove key duties off to the states. These are extraordinary shifts given the last month of developments as the government has dealt with the COVID-19 pandemic.

The guidelines say nothing about the U.S. Constitution. Indeed, the following words appear in the guidelines a sum total of zero times: Constitution, statute, law, code, rule, and authority. This is rather shocking. Government documents are government documents, after all, and they are almost always chock full of references to public laws, the United States Code, agency rules and regulations, and sometimes the numbers of executive orders. At a minimum, they usually tout some sense of “authority” to do something. This document doesn’t do that anywhere.

Even the legally operative commandment which all attorneys are trained to spot — “shall” — is nowhere to be seen.  The word “must” appears, but it simply applies to hygiene: “Those who do interact with residents and patients must adhere to strict protocols regarding hygiene,” the plan says. The White House doesn’t need to say that. It’s already in state statutes, regulations, and local health codes.

The word “regulation” does appear in the vague sense that “employers” are (guided?) to:

Develop and implement appropriate policies, in accordance with Federal, State, and local regulations and guidance, and informed by industry best practices, regarding:

This lack of law is no surprise given the wars Trump has waged over the clash between his perceptions and the legal realities of the limits of his own powers. We have examined those issues thoroughly several times already.  Apparently, Trump has chosen to throw in the towel on that front. His guidelines speak only of “proposed state or regional” criteria and summarily admit that dealing with on-the-ground issues is not the job of the federal government:

State and local officials may need to tailor the application of these criteria to local circumstances (e.g., metropolitan areas that have suffered severe COVID outbreaks, rural and suburban areas where outbreaks have not occurred or have been mild). Additionally, where appropriate, Governors should work on a regional basis to satisfy these criteria and to progress through the phases outlined below.

Elsewhere, in big, fat, beautiful letters reminiscent of Trump’s love for his stimulus checks, the guidelines state they are “IMPLEMENTABLE ON STATEWIDE OR COUNTY-BY-COUNTY BASIS AT GOVERNORS’ DISCRETION.”

It also says people should “[c]ontinue to adhere to State and local guidance as well as complementary CDC guidance.”

That’s a far cry from Trump throwing around his (non-existent) the authority to order the country open.

Trump Eschews the Power to Tax and Spend for Medical Supplies

Where things get sketchy, though, is where the report again attempts to shift certain federal burdens to state and local governments. There are many federal laws on the books which together set forth a playbook for how the federal government is legally supposed to respond to a pandemic. We’ve been looking at them for nearly a month.  The Strategic National Stockpile is where many sticking points have occurred.  It requires the federal government to keep medical gear in stock to ensure that Americans can survive a pandemic.

When governors said they didn’t have enough supplies, Trump blamed them despite clear law on the books which makes the stockpile his job. Jared Kushner bungled the law. A government website mysteriously was changed to basically ignore the law. Trump dug in further to claim he was neither a “shipping clerk” nor an “ordering clerk” for the states. That is also legally incorrect, we pointed out. We’ve documented Trump’s increasingly harsh attempts to blame previous administrations or governors for medical supply failures by refocusing attention back to the law.  (Read all of our coverage here for the background on how the law works.)

Trump’s plan to reopen the country continues this theme and shirks the spirit and function of the national stockpile law. Per the Trump plan document, states must bear the burden the federal government is legally obligated to bear:

The Strategic National Stockpile was gutted by Republican and Tea Party budget battles during the Obama Administration. The law remains on the books and has indeed been updated because of COVID-19: it is the federal government’s job to secure medical gear, and Trump’s plan again attempts to shift that responsibility.