Trump Pressures Bill Barr to Open Yet Another Investigation of His Political Enemies: ‘This Has to Be Known About Before the Election…’ 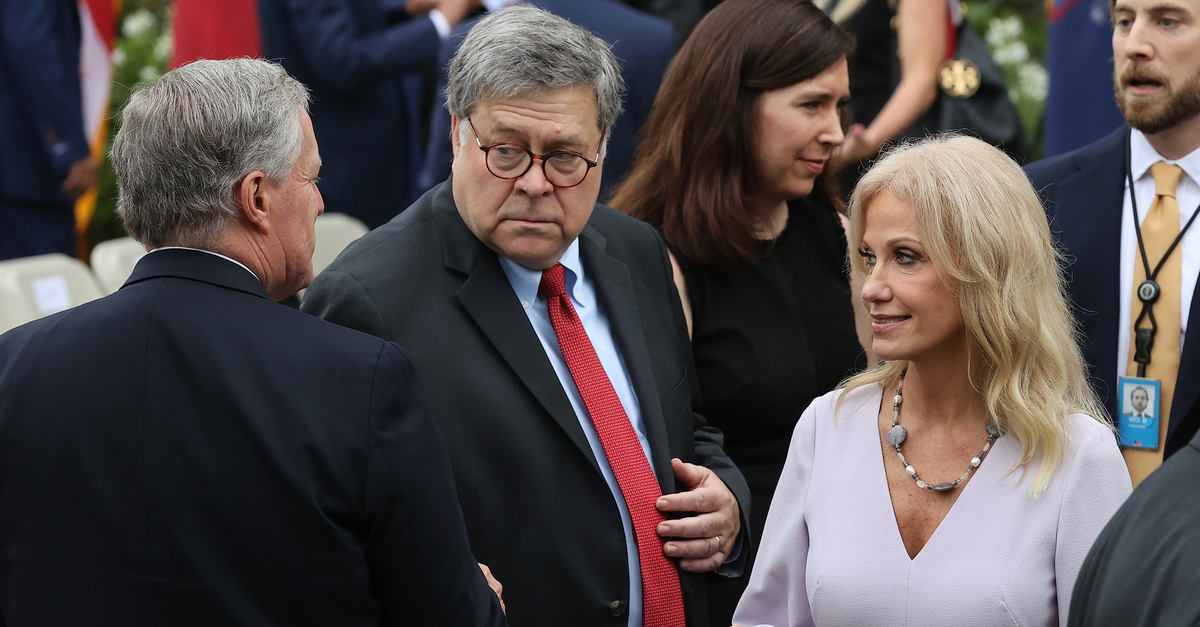 The Clinton Foundation-Uranium One probe? Did not result in Hillary Clinton going to jail. The investigation of Obama administration “unmasking”? Wasn’t worse than Watergate. The John Durham investigation of the Russia investigation? Isn’t expected to turn up anything useful for President Donald Trump’s reelection campaign. Flop after investigative flop has not deterred President Trump from pressuring Attorney General Bill Barr to launch yet another investigation of his political enemies. This time those enemies are Hunter Biden and Joe Biden.

Trump lawyer Rudy Giuliani successfully planted the Hunter Biden laptop/secret emails story at the New York Post last week, an election season special. The story has been scrutinized ever since, and for a number of reasons (though the president believes it is a “crime” not to automatically report on it).

The New York Times reported Sunday that the NY Post journalist who authored the report refused to allow his byline to be used on the story because of concerns over its credibility; another reporter only found out her byline appeared on the story after it was published; another reporter whose byline appeared on the story was formerly an associate producer on Fox News’s Hannity, and it was her first byline with the tabloid. Giuliani himself admitted that he went to the NY Post because he knew other outlets would vet the material. On Monday, our sister site Mediaite reported that Fox News passed on the initial story over credibility concerns (though the opinion shows have covered it).

Leaving aside the claims, circumstances, suspicions of Russian disinformation, and the timing in the story itself, the content just so happens to neatly dovetail with an anti-Biden narrative that the president was impeached for corruptly pursuing—a narrative that Republican senators continued pursuing immediately after they acquitted Trump at a witnessless trial.

On Tuesday, former ESPN personality Will Cain told Trump on Fox & Friends that some people were saying that Hunter Biden and Joe Biden need to be investigated by a special prosecutor. “Will you be doing that, will you be appointing a special prosecutor?” Cain asked, while stating that the Department of Justice must “appoint an independent unbiased special counsel to investigate these issues that have been raised, as well as any corresponding legal or ethical issues that might be uncovered from the former vice president’s 47 years in public office.”

Trump responded by saying that Attorney General Barr has “got to act” and “got to act fast” by launching a highly politicized investigation before the election, invariably to boost the 45th president’s reelection prospects.

“We’ve got to get the attorney general to act. He’s got to act. And he’s got to act fast. He’s got to appoint somebody. This is major corruption and this has to be known about before the election,” Trump said. “And by the way, we’re doing very well. We’re going to win the election. We’re doing very well. If you look at all of what’s happening and all of the people that come in and don’t come in, you take a look all around the country, with Texas early voting, those are our votes too, and we’re doing well in Texas.”

Just days ago, Trump said he was “not happy” that Bill Barr didn’t deliver the Durham probe goods in time for the election. He didn’t commit to keeping Barr on as attorney general for a second term, if there is a second term. Remarkably, a “senior administration official” responded to the president’s comments about Barr by saying the attorney general “saved” Trump’s presidency and “everyone knows it.”

“The great irony in the president’s remarks is he is only in a position to complain because Bill Barr saved his presidency and everyone knows it,” the person told Fox News.

Trump made clear in August that Barr’s legacy depended on whether he prosecuted the president’s political enemies.