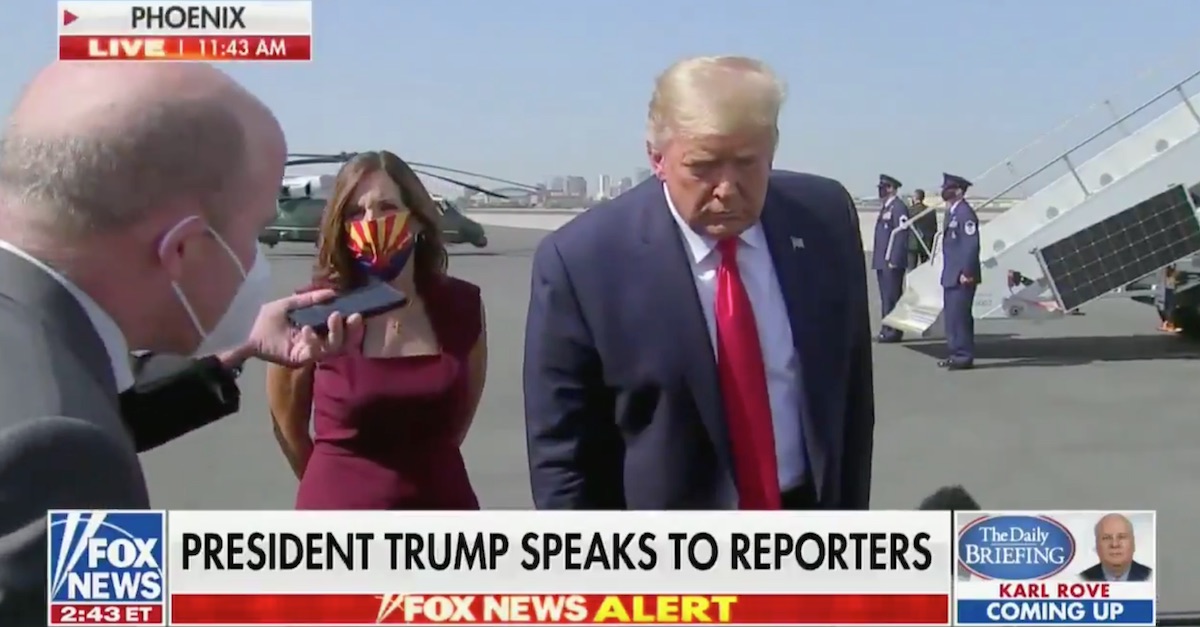 President Donald Trump on Monday railed against the fourth estate and Democratic presidential nominee Joe Biden in a diatribe that ended with the president claiming that journalists are criminals if they have not reported on the extremely suspicious and dubiously-sourced New York Post story involving a laptop allegedly left at a computer repair shop by Hunter Biden.

After erroneously claiming that he was immune to COVID-19, after and refusing to answer questions about his coronavirus testing history, the president was asked about his campaign’s recent efforts to paint his opponent as a corrupt criminal.

“Your campaign strategy seems to be to call Biden a criminal, why is that?” Reuters’ White House correspondent Jeff Mason asked Trump, who had just landed in Arizona for a campaign rally.

“He is a criminal,” answered Trump, who is currently a subject of the Manhattan district attorney’s criminal investigation for possible tax fraud.

“And you know who’s a criminal here? You’re a criminal for not reporting it,” Trump said, referencing the Hunter Biden story and pointing at the reporter who asked the question.

The New York Post’s story alleged that after Hunter Biden abandoned his laptop at a Delaware repair shop, the shop’s “legally blind” owner found incriminating photos and emails on the device which suggested that the former vice president leveraged his political power to enrich his son. Based on the documents allegedly obtained from the computer, the article claimed that then-VP Biden directed U.S. foreign policy in Ukraine to help Hunter, who was a board member of the Ukrainian energy company Burisma Holdings.

It should be noted that President Trump was impeached in Dec. 2019 for obstructing Congress and for abusing his office by withholding vital, congressionally appropriated military aid from Ukraine in the pursuit for dirt just like this on the Bidens. After Trump’s impeachment acquittal, Republican Senators continued what the president and his personal lawyer Rudy Giuliani had started.

Since its publication on Wednesday, the NY Post story’s assertions have been undermined by even more controversy.

Giuliani himself admitted that he went to the NY Post because he knew other outlets would perform a thorough fact-check before printing. On Monday, our sister site Mediaite reported that Fox News passed on the story over credibility concerns.

In a very strange interview with journalists last week, the Trump-supporting shop owner, John Paul Mac Isaac, further raised eyebrows by repeatedly changing his story about the timeline of events, invoking the Seth Rich conspiracy theory, and confirming that he’d given a copy of the computer’s hard drive to Giuliani.

Several news outlets have also reported that U.S. intelligence agencies had warned the Trump administration that the Russians were actively trying to manipulate Giuliani, and the FBI opened an investigation into whether the emails were part of a foreign disinformation campaigned aimed at hurting Biden. Giuliani has a history of pushing false and conspiratorial claims from Russian sources, particularly from Andrii Derkach, a pro-Russian member of the Ukrainian Parliament whom the Treasury Department sanctioned last month and labeled as an “active Russian agent” who’s had close ties to the Kremlin for more than a decade.

Derkach, once dubbed the “Ukrainian Putin,” also aided Giuliani in an attempt to discredit the Mueller report.

A short time after taking the rally stage in Arizona, Trump continued to push the idea that Biden was a criminal, telling his supporters that Biden was “lucky” that Bill Barr is the U.S. attorney general “because I know people that would have had him locked up five weeks ago.”

President Trump says Joe Biden is lucky that Bill Barr is attorney general "because I know people that would have had him locked up five weeks ago."