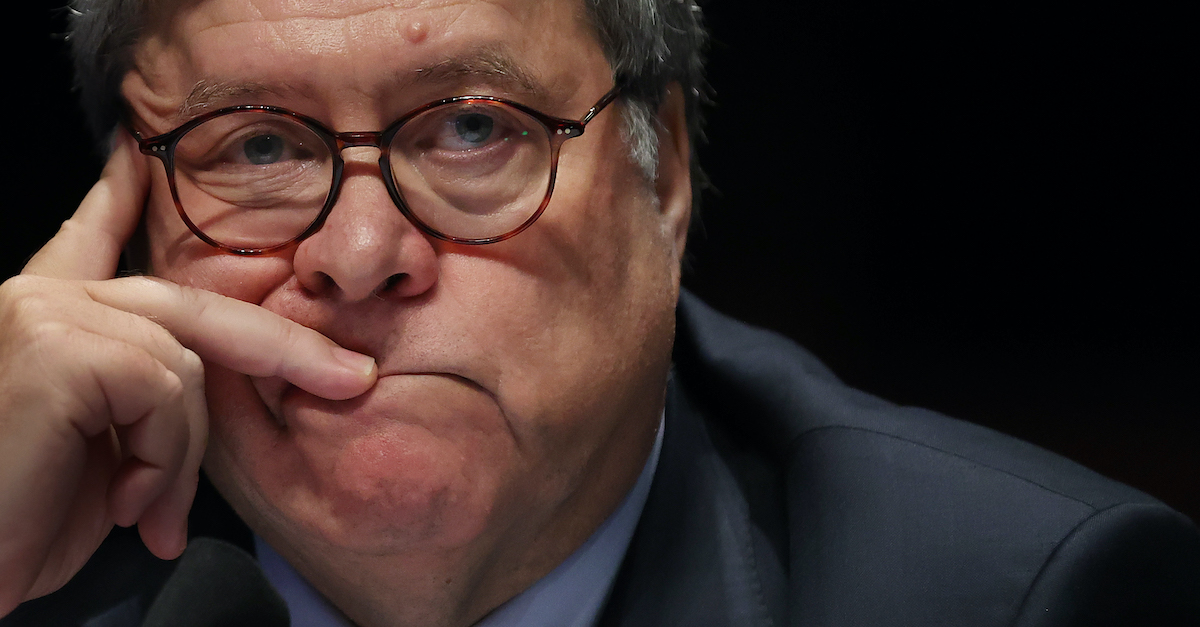 Former Attorney General Bill Barr announced his resignation roughly two weeks after he revealed that he had 1) appointed John Durham as special counsel and 2) told the Associated Press that the Department of Justice had found no evidence to support the “Kraken” conspiracy theory that the 2020 election was stolen from Donald Trump and handed to Joe Biden. Although Trump himself reportedly thought Sidney Powell’s Dominion theory was a “crazy” idea that no one believed as of late November, the 45th president was in “so you’re telling me there’s a chance” mode during a heated meeting behind closed doors on Dec. 1.

Axios reported that Barr told Trump bluntly on Dec. 1 that he looked into the claims and determined they were “bullshit.”

The White House meeting occurred after Trump had seen Barr’s comments to the AP on Twitter. What Barr said during the AP interview: “There’s been one assertion that would be systemic fraud and that would be the claim that machines were programmed essentially to skew the election results. And the DHS and DOJ have looked into that, and so far, we haven’t seen anything to substantiate that.”

This angered Jenna Ellis and Rudy Giuliani. It angered the president, too. Trump reportedly referred to himself in the third person when accusing Barr of being a Trump hater.

Barr is said to have responded by basically saying decease the “Kraken.”

“These things aren’t panning out,” Barr was quoted as saying. “The stuff that these people are filling your ear with just isn’t true.” Then came the expletives. Barr said the election steal theories being promoted by pro-Trump actors were inscrutable “bullshit.”

“I’m a pretty informed legal observer and I can’t fucking figure out what the theory is here,” said the then-Attorney General of the United States. “It’s just scattershot. It’s all over the hill and gone.”

The outgoing president reportedly responded by saying “maybe” twice. Trump had also asked Barr if he was watching a Michigan Senate hearing that was airing on One America News (Barr said he wasn’t, and Trump said “Maybe you should”).

The next day, Mellissa Carone appeared alongside Giuliani in Michigan.

A couple of weeks later, Barr submitted a resignation letter that was described as reaching a “Dear Leader” level of sycophancy—a far cry from the Trump hater the president reportedly accused Barr of being during that Dec. 1 meeting at the White House. The opening paragraph of the letter said it was incumbent upon all levels of government to promote confidence in the outcome of the 2020 election. 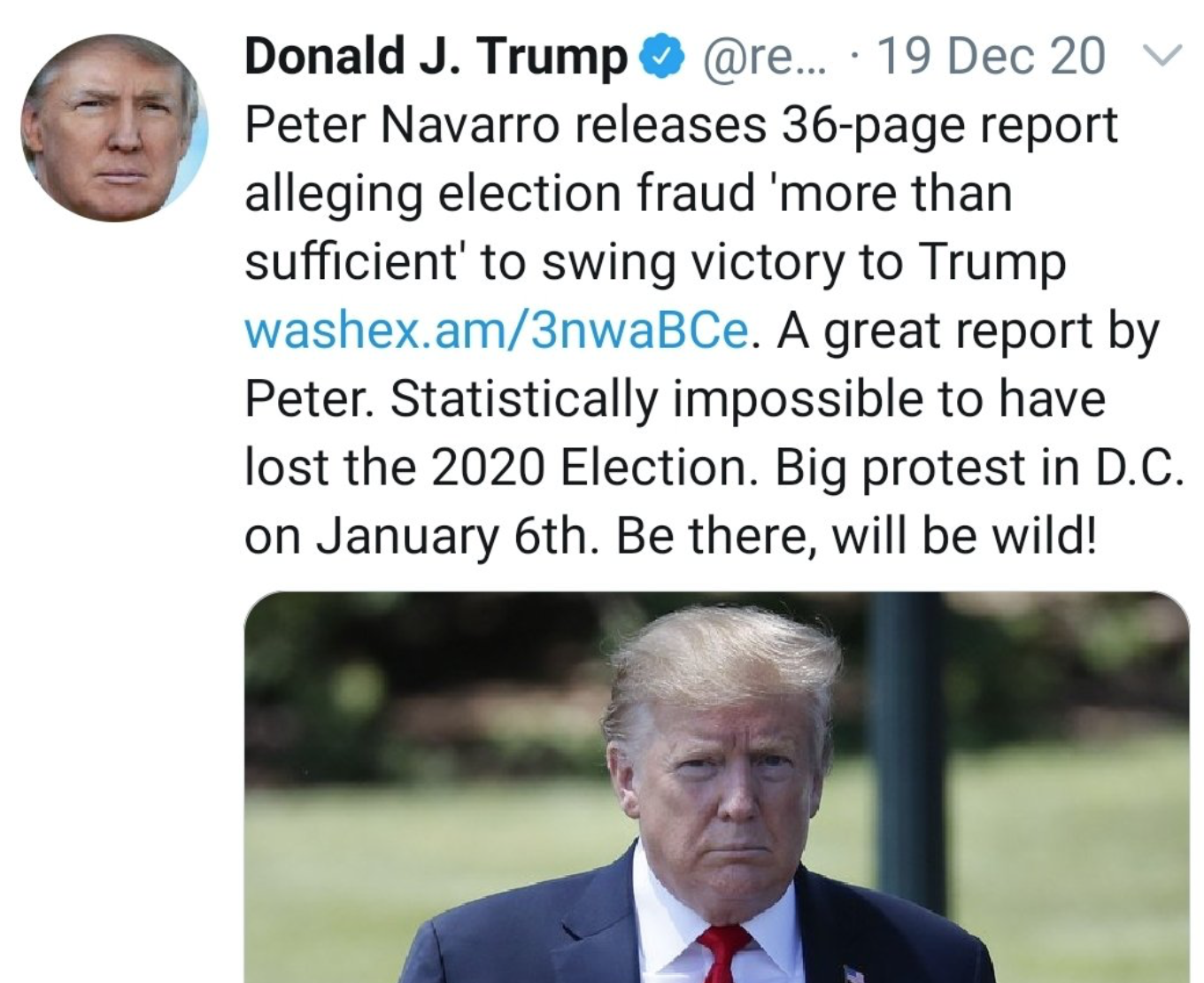 Two days later, Barr said during his last press conference as AG that he would not be appointing a special counsel to investigate the election. Barr again said he had seen no evidence that “systemic or broad-based” election fraud altered the outcome of the election.

After Barr’s departure, the president and his allies continued the pressure campaign—even as they continued losing left and right in court. On Jan. 1, Trump again alerted his supporters to a “BIG Protest Rally” on Jan. 6.

“StopTheSteal!” he urged his supporters. 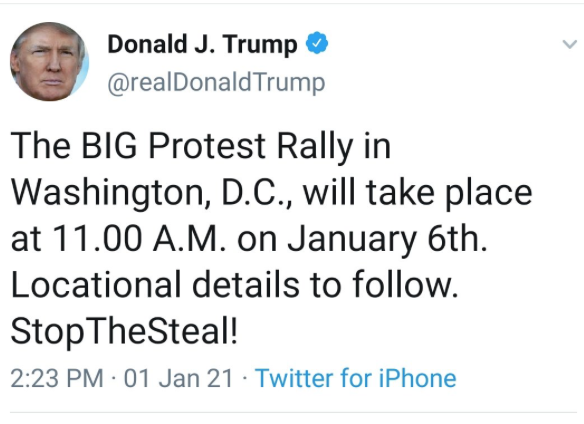 The next day, Jan. 2, Trump was on the phone with Georgia’s Republican Secretary of State Brad Raffensperger. Trump asked the official to “find” the votes Trump needed to flip the results in the Peach State (even though that wouldn’t change the outcome of the entire election). When that failed, Trump shifted his attention to uttering the falsehood that Vice President Mike Pence had the power to overturn the election on Jan. 6, setting Pence up to be the fall guy. Trump spoke at the rally on Jan. 6 as scheduled and promised.

“Mike Pence, I hope you’re going to stand up for the good of our Constitution and the good of our country and if you’re not, I’m going to be very disappointed in you,” Trump said. Deadly violence followed.

Many of the president’s supporters stormed the Capitol as Congress was doing the ministerial business of counting the Electoral College votes and certifying that Joe Biden won the election; some of Trump’s supporters died that day, and many others ended up being arrested and charged in the ensuing days.

On Jan. 7, Barr told the AP that Trump betrayed his office and his supporters, saying that “orchestrating a mob to pressure Congress is inexcusable.”

Six days later, the House went on to impeach Trump for inciting an insurrection. No other president has been impeached twice.