Twitter, President Donald Trump’s social media platform of choice, has “permanently suspended” his account in the aftermath of the attempted Capitol coup of January 6, 2021.

After close review of recent Tweets from the @realDonaldTrump account and the context around them we have permanently suspended the account due to the risk of further incitement of violence.https://t.co/CBpE1I6j8Y

However, we made it clear going back years that these accounts are not above our rules and cannot use Twitter to incite violence. We will continue to be transparent around our policies and their enforcement.

“After close review of recent Tweets from the @realDonaldTrump account and the context around them we have permanently suspended the account due to the risk of further incitement of violence,” Twitter said.

The Silicon Valley giant said “ongoing tensions” and concerns about Trump-inspired violence in the near future are what informed this decision.

“The 75,000,000 great American Patriots who voted for me, AMERICA FIRST, and MAKE AMERICA GREAT AGAIN, will have a GIANT VOICE long into the future. They will not be disrespected or treated unfairly in any way, shape or form!!!”

“To all of those who have asked, I will not be going to the Inauguration on January 20th.”

Twitter said it assessed these tweets under its “Glorification of Violence policy” because Trump’s statement ditching the Joe Biden Inauguration is “being received by a number of his supporters as further confirmation that the election was not legitimate and is seen as him disavowing his previous claim made via two Tweets (1, 2) by his Deputy Chief of Staff, Dan Scavino, that there would be an ‘orderly transition’ on January 20th.”

“The second Tweet may also serve as encouragement to those potentially considering violent acts that the Inauguration would be a ‘safe’ target, as he will not be attending,” the Twitter explanation went on. “The use of the words ‘American Patriots’ to describe some of his supporters is also being interpreted as support for those committing violent acts at the US Capitol.”

In closing, Twitter warned that “future armed protests have already begun proliferating on and off-Twitter”—including a “proposed secondary attack on the US Capitol and state capitol buildings on January 17, 2021.”

Somewhere Sen. Josh Hawley (R-Mo.) is probably saying that this is a violation of the First Amendment. It is not. Twitter is a private company, not the government.

President Trump has been hell-bent on repealing Section 230 because social media companies are immune from liability for content moderation decisions—for instance, often flagging his tweets and deplatforming right-wing accounts:

Civil liability
No provider or user of an interactive computer service shall be held liable on account of—
(A) any action voluntarily taken in good faith to restrict access to or availability of material that the provider or user considers to be obscene, lewd, lascivious, filthy, excessively violent, harassing, or otherwise objectionable, whether or not such material is constitutionally protected; or
(B) any action taken to enable or make available to information content providers or others the technical means to restrict access to material described in paragraph (1).

Ironically, the immunity from liability granted by Section 230, as well as Trump’s status as president of the United States, is in all likelihood what kept Twitter from taking this deplatforming action much sooner. Law&Crime has pointed out on many occasions that Trump had demanded—even taken a defense spending bill hostage—in order to repeal a law that made his Twitter account possible.

Later, President Trump, stripped of his @realdonaldtrump account, fired up @POTUS and took direct aim at Section 230—again—blaming “Democrats and the Radical Left” for his woes. 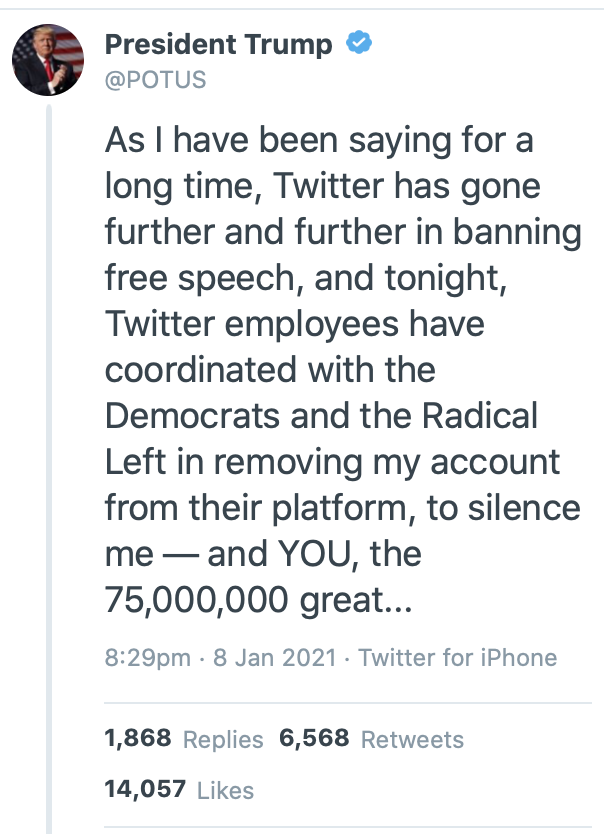 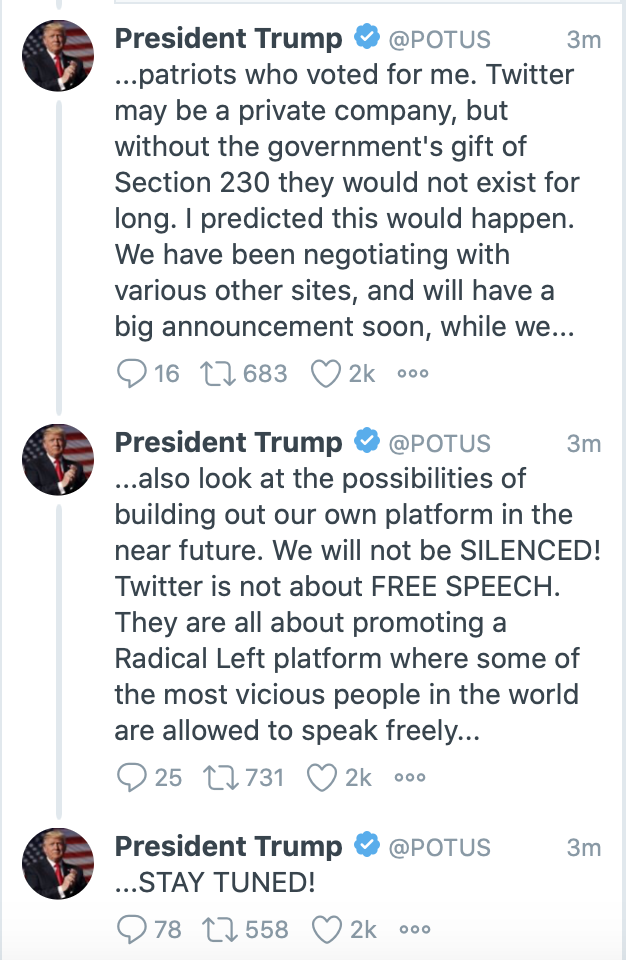 Twitter tuned him out almost immediately after he said “STAY TUNED!”