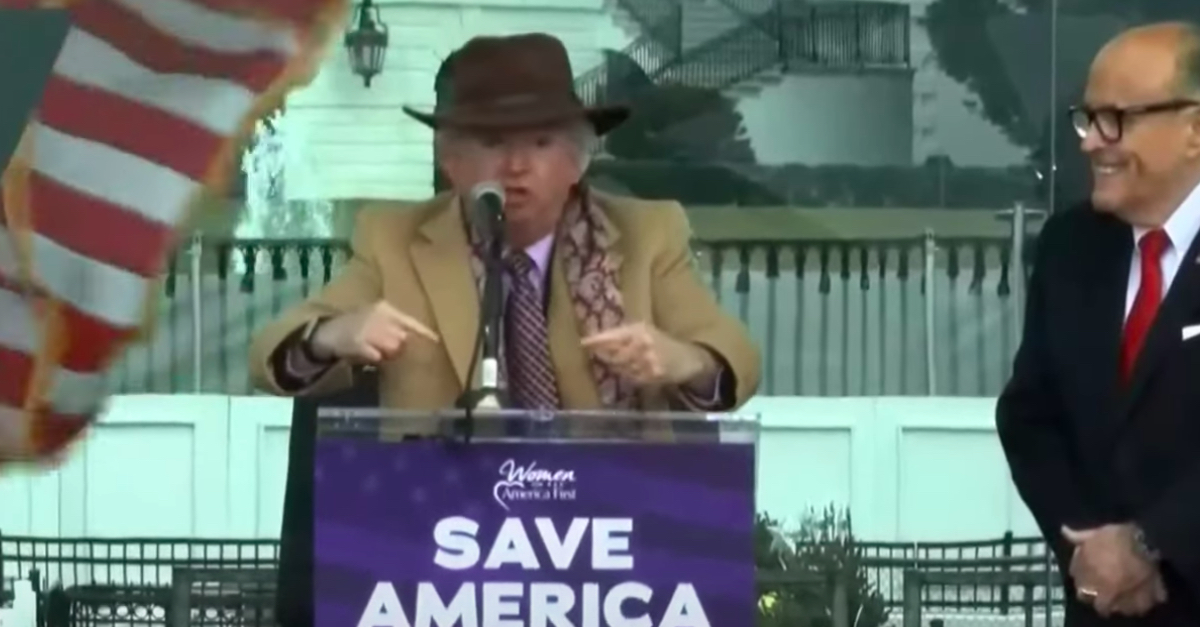 Professor John Eastman speaking at the pro-Trump “Stop the Steal” rally immediately before the Capitol was stormed.

A law professor and attorney for President Donald Trump who repeatedly said the 2020 election was rigged and spoke at the rally that immediately preceded last week’s riots at the U.S. Capitol baselessly blamed the violent insurrection on “Antifa” on Wednesday.

Chapman University law professor John Eastman, who last year spawned the birther theory that Kamala Harris was constitutionally prohibited from serving as vice president, was the target of backlash after appearing with Rudy Giuliani at Trump’s Jan. 6 “Stop the Steal” protest. There, Eastman said President-elect Joe Biden’s victory was illegitimate.

“They were unloading the ballots from that secret folder, matching them, matching them to the unvoted voter, and voilà, we have enough votes to barely get over the finish line,” Eastman told the rallygoers. “We saw it happen in real time last night and it happened on Nov. 3 as well,” he added, referring first to the Jan. 5 Senate runoff elections, both of which were won by Democratic challengers in Georgia.

Two days after the Capitol riots, more than 160 members of Chapman’s faculty— including professors, deans and members of the board—called for Eastman to be fired for his role in inciting the violence perpetrated shortly thereafter by supporters of President Trump.

In a response to his colleagues provided to the Los Angeles Times, Eastman showed no remorse for any of his conduct and claimed that he had proof to support all of his claims.

“Eastman said his claims are backed up by evidence, and that the breach at the Capitol was instigated by the leftist, anti-fascist group known as Antifa,” the LA Times report stated.

“Without bothering to check with me about the evidence I have to support every statement I made, they simply made scurrilous, defamatory, and unfounded claims that my statements had no basis in law or fact,” Eastman wrote.

Despite Eastman’s assertion, there has been no evidence of any widespread voter fraud nor evidence that left-wing anti-fascist groups were responsible for orchestrating the storming of the Capitol (House Minority Leader Kevin McCarthy rejected the “Antifa” claims before President Trump was impeached on Wednesday). In fact, a multitude of courts—both state and federal—have reviewed and dismissed claims of rampant voter fraud as baseless; the list of those arrested at the Capitol are almost all unapologetic supporters of the president.

Law&Crime reached out to Eastman for comment and asked him to provide evidence for his voter fraud and “Antifa” claims.

Here is John Eastman, chairman of a Federalist Society practice group, at the pre-insurrection rally spouting conspiracy theories about voter fraud. He concludes: “Anybody that is not willing to stand up and [vote to overturn the election] does not deserve to be in the office!” pic.twitter.com/auD2vXSjNE

UC Irvine law professor Rick Hasen, an expert in election law, called Eastman’s claims “unfuckingbelievable,” and called for him to be excommunicated by fellow academics.

“I sure hope that John Eastman, in addition to being disbarred and considered for charges related to the insurrection, is totally excluded from any academic events. (I’ve included him in panels in the past and never will again.) He actively is working to subvert American democracy,” Hasen said.

I sure hope that John Eastman, in addition to being disbarred and considered for charges related to the insurrection, is totally excluded from any academic events. (I've included him in panels in the past and never will again.) He actively is working to subvert American democracy https://t.co/nY4epWNOth

It appeared that unless something drastic occurred, Eastman would retain his position as a tenured professor at Chapman.

“After discussions over the course of the last week, Dr. John Eastman and Chapman University have reached an agreement pursuant to which he will retire from Chapman, effective immediately. Dr. Eastman’s departure closes this challenging chapter for Chapman and provides the most immediate and certain path forward for both the Chapman community and Dr. Eastman,” the statement said. “Chapman and Dr. Eastman have agreed not to engage in legal actions of any kind, including any claim of defamation that may currently exist, as both parties move forward.”

Eastman had attracted even more negative attention for Chapman University from Tuesday into Wednesday after the New York Times reported that he argued behind closed doors prior to Jan. 6 that Vice President Mike Pence had the authority to do something to reverse Trump’s election loss. The president’s allies argued that Pence could throw out the so-called-but-not-actually “fraudulent” Electoral College votes on Jan. 6 if he so chose. That’s not the case, and Pence said in a statement that he had no such power. At a rally, the president falsely claimed Pence could save the election and then an angry mob of his supporters stormed the Capitol on a deadly day of infamy in America; Eastman himself appeared on that rally stage.

Some of Trump’s supporters wanted to hang the vice president because he refused to do something he had no power to do—namely, to unilaterally decide the election outcome and, in the process, reelect himself for four more years.

“It’s over,” U.S. District Judge Mark Cohen of the Northern District of Georgia said, referring to Trump’s request to decertify Georgia’s vote. “The electoral college has met. You think that’s not unprecedented.”

Today, Eastman’s client was impeached for the second time, which is also unprecedented.

In December, Eastman filed a motion for intervene on the president’s behalf in Texas Attorney General Ken Paxton’s failure of an attempted lawsuit at the Supreme Court. Paxton tried to get the Supreme Court to step in and overturn the outcomes of the elections in Pennsylvania, Wisconsin, Michigan and Georgia—all states that Trump lost.

Eastman apparently believed there was a “fairly good” chance SCOTUS would hear the case. That was not so. The president’s supporters believed that the Supreme Court had no choice but to hear the case or, in the alternative, had already agreed to do so. Those things weren’t true either. Election law experts said all along that there was actually “zero chance” the high court would take the case.