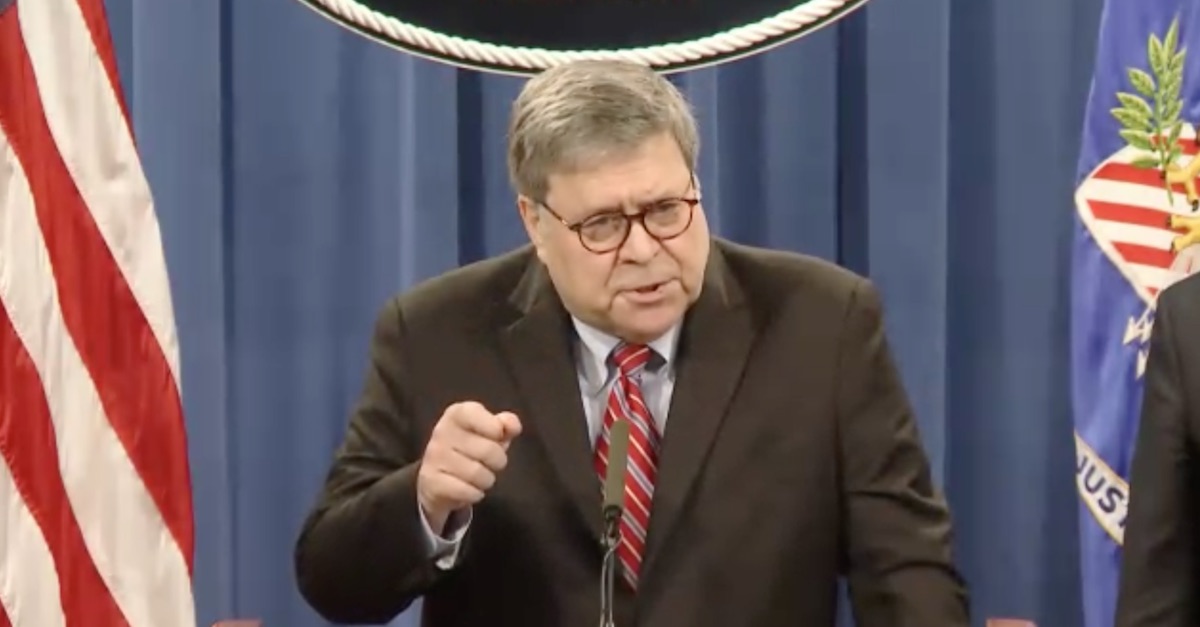 Attorney General Bill Barr answered various press questions on Monday after announcing that the DOJ had filed charges against Abu Agila Muhammad Mas’ud Kheir Al-Marimi in the Pan Am Flight 103 bombing of 1988, which killed all passengers on board, including 190 Americans. Barr, who will be leaving this job in two days, said he sees no reason to appoint special counsels to investigate election fraud and Hunter Biden.

Barr made the remarks Monday after it was reported over the weekend that President Donald Trump discussed appointing Sidney Powell as special counsel to investigate unsubstantiated allegations of widespread, election outcome altering voter fraud and irregularities. Barr reiterated what he said weeks ago: that he has seen no evidence to support those allegations.

Barr said he was sure there is some fraud in every election, including this one, but he noted that he has seen no evidence to support allegations that “systemic or broad-based” election fraud cost Trump a win.

The attorney general also said he sees “no basis” for “wholesale seizure of [voting] machines by federal government,” which has essentially been the goal of the so-called “Kraken” lawsuits unsuccessfully brought in Michigan, Georgia, Arizona and Wisconsin by Powell and other lawyers. The “Kraken” project has been focused on obtaining a court order that would allow Powell and her team to perform forensic analyses on Dominion Voting Systems’ machines. Dominion has since threatened legal action against Powell.

“Your false accusations about Dominion are defamatory per se and have exposed you, the entities you control, and the Trump Campaign to substantial legal risk for defamation,” said a demand letter from defamation attorneys Thomas Clare and Megan Meier.

Barr was also asked about President-elect Joe Biden’s son Hunter and the ongoing federal probe of the latter’s “tax affairs.” The outgoing attorney general said that investigation is “being handled responsibly and professionally,” so there was no need for a special counsel.

“To this point, I have not seen a reason to appoint a special counsel, and I have no plan to do so before I leave,” he said. It remains to be seen whether there will be a reason to do so when Biden takes office. Some legal experts have said Biden should let the Trump-appointed U.S. Attorney for the District of Delaware David C. Weiss remain in that position and oversee the investigation, wherever it may lead.

Barr otherwise noted that he had appointed John Durham as special counsel to ensure that Durham would be able to his finish his work investigating the origins of the Russia investigation. Barr said Durham was making good progress.

AG Barr declined to comment on the constitutionality of presidential self-pardons.