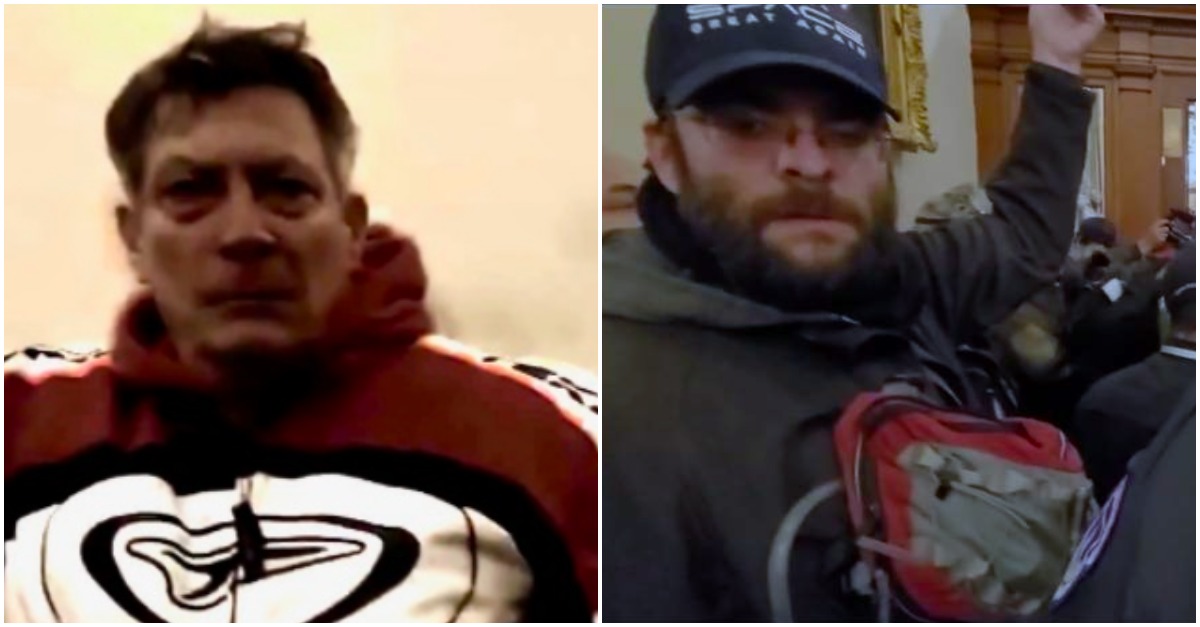 Erin Smith‘s husband used his service weapon to shoot and kill himself on the way to work on Jan. 15 — a little over a week after he was struck in the face by something like a crowbar during the siege at the U.S. Capitol Complex broadly carried out by documented followers of Donald Trump. Now, Smith is suing the men who allegedly attacked her husband for assault and battery and wrongful death.

Jeffrey Smith was employed as a police officer by the federal district’s Metropolitan Police Department.

“Due to the circumstances surrounding the planned Trump election event, MPD assigned Officer Smith to the Civil Disturbance Unit,” the lawsuit originally filed in the U.S. District Court for the District of Columbia on Friday notes. “Specifically, Officer Smith was part of the larger contingent of MPD and other federal law enforcement that was tasked with responding to the Capitol Insurrection.”

Part of Smith’s duties on Jan. 6 were to escort the unruly members of the right-wing mob outside of the Capitol building. Two of the men being escorted fought back and severely injured the 12-year veteran.

When first filed, one of the alleged attackers had yet to be identified and was listed as “John Doe” in the initial complaint. An amended complaint filed Saturday identified him as Taylor F. Taranto, “a veteran of the U.S. Navy” and resident of Washington State. The second alleged attacker and named defendant in the lawsuit is D.C.-based Dr. David Kaufman.

“Kaufman was part of the insurrectionist mob inside the US Capitol and was being escorted out of the building by MPD officers,” the lawsuit says. “Co-Defendant Taranto handed a cane or crowbar (or similar object) to Kaufman. Kaufman, in turn, violently swung the cane and struck Officer Smith in the face/head.”

Smith’s filing casts the attack as a violent crime of opportunity.

“Officer Smith was in a particularly vulnerable situation because his face shield was up (leaving his face and eyes exposed),” the lawsuit explains. “It appears that Kaufman and Taranto specifically and maliciously targeted Officer Smith because his visor was in the upright position, making him vulnerable to this brutal and vicious attack.”

The lawsuit alleges that Smith “died as a proximate cause of the Capitol Insurrection” and goes on to further allege that his “cause of death was severe depression and brain injury proximately caused by concussion Officer Smith received by the assault of January 6, 2021 by Kaufman and Taranto.”

“The effects of post-concussive syndrome, in turn, includes health maladies such as severe depression and suicide,” the filing explains. “In other words, but for the concussion of Officer Smith at the hands of these Defendants, Officer Smith would be alive today. He was killed in the line of duty by the Defendants.”

An exhibit contains his declaration which includes the following detailed discussion:

The video of the event demonstrates that Officer Smith was struck in the face and head while his face shield was up. In the Injury or Illness Report that he filed, Officer Smith reported pain in his “neck and face,” corroborating that he was struck in the face. As a direct result if [sic] being struck in the face and head, Officer Smith was stunned and fell. The loss of consciousness resulting from the blow indicates that he suffered a concussion. The symptoms that he manifested after being injured in the riot and leading up to his suicide, including anxiety and depression, represented post- concussion syndrome. Therefore, his mood changes were the direct result of the head trauma he suffered in the riot on January 6, 2021.

The acute, precipitating event that caused the death of Officer Smith was his occupational exposure to the traumatic events (including sustaining a concussion with post-concussive syndrome) that he suffered on January 6, 2021, in connection with his duties as a Metropolitan Police Officer of the District of Columbia.

The lawsuit alleges that Kaufman and Taranto are both liable for assault and battery and that both are responsible for his wrongful death — additionally suing Taranto for aiding and abetting.

“Taranto possessed actual knowledge of the wrongful intentions of Kaufman,” the lawsuit alleges.

The filing elaborates at length:

Indeed, there could be no other reason to supply Kaufman with a weapon other than to use it as a cudgel against MPD Officers, like Officer Smith, as the police officers were escorting the mob out of the Capitol building. Taranto directly aided, abetted and encouraged Kaufman’s wrongful and tortious conduct, and knowingly supplied substantial assistance, aid and encouragement in the commission of such conduct. As a result of this intentional and unlawful battery, Officer Smith sustained physical pain, injury and illness. Specifically, Officer Smith suffered severe and permanent injuries to his head (concussion), and neck; he suffered great pain and mental anguish and mental distress; and he was otherwise damaged.

No one has been charged criminally in the death of Smith. Neither Kaufman nor Taranto are currently among the hundreds of Jan. 6 defendants facing myriad criminal charges in federal court. Two two men’s identities were reportedly determined by third-party investigators.

“I thought the ‘I’ in FBI stood for ‘investigation,’” Erin Smith’s attorney David P. Weber told the HuffPost. “It’s pretty lame that a private lawyer for a dead police officer’s widow has to be the one conducting the investigation . . . The fact that these volunteers have accomplished what the FBI has not is extraordinary.”

Weber, who is also a law professor at Perdue School of Business at Salisbury University in Maryland, reportedly reached out to a HuffPost reporter who had contact with various people connected with the so-called “Sedition Hunters” movement.  One similar and/or associated group known as the “Deep State Dogs” is said to have scrolled through “hours of Capitol attack videos” to make the links to the two men named as defendants in Erin Smith’s lawsuit, the HuffPost reported.

Such groups of citizen sleuths have made a presence online in their attempts to identify the various individuals connected with the events of Jan. 6.

Weber apparently trusted the links offered by the groups enough to name the two men as defendants.  Exhibit photos which allege to show the two named men are attributed in court documents directly to the “Sedition Hunters” themselves.

Smith is one of three officers who died in the immediate aftermath of the Capitol breach.

Capitol Police officer Howard Liebengood also died by suicide in the days following. Capitol Police officer Brian Sicknick famously died in the line of duty on that fateful day but his death was later attributed to natural causes — a stroke — but the medical examiner commented that “all that transpired played a role in his condition.”

Law&Crime reached out to a medical practice associated with Kaufman but no response was forthcoming at the time of publication.