Judge Grills Prosecutors on Obstruction Charges in Oath Keepers Cases, a Legal Issue That Could Shake Up Jan. 6 Docket 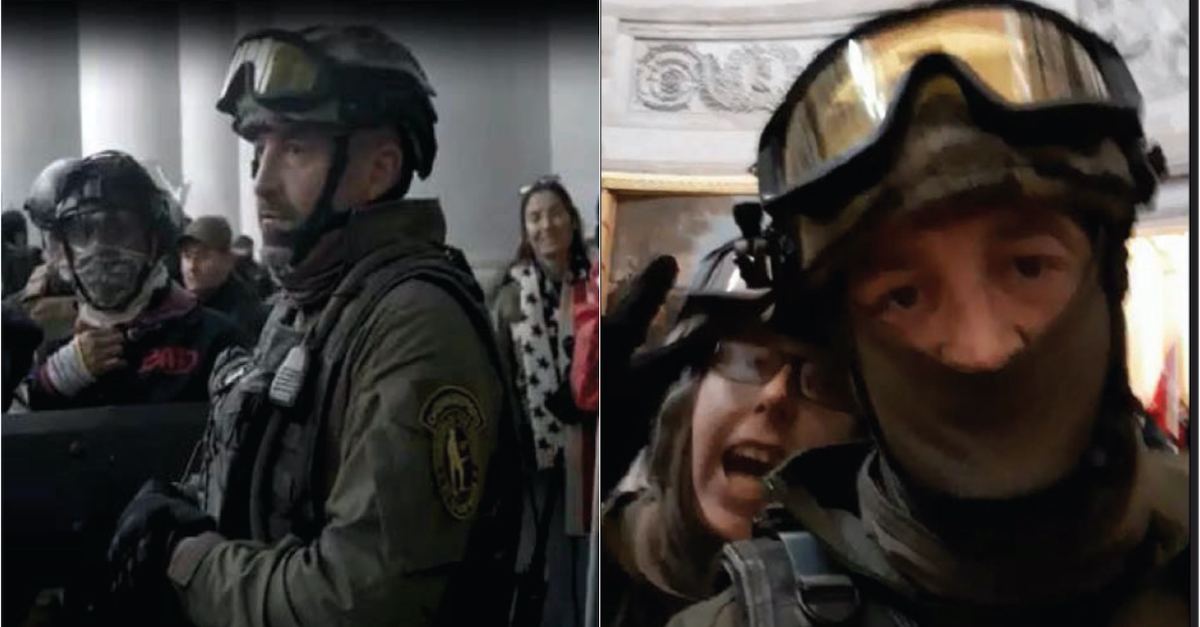 Multiple militia members charged in the sprawling, 18-defendant Oath Keepers conspiracy case challenged the prosecution’s application of an obstruction of an official proceeding statute common in the Jan. 6 cases. On Wednesday, a federal judge sharply questioned prosecutors about some of the language in the felony statute and what limiting principles could prevent it from being deployed more broadly against political protest.

The legal issue could affect one of the sharpest arrows in the federal government’s quiver for prosecuting the Jan. 6 attack on the U.S. Capitol, one for which multiple high-profile participants in the siege already have pleaded guilty.

“That’s What We Americans Do”

Duke Edward Wilson, a 67-year-old Idaho man in a “CNN Fake News” hat, recently did, too.

So did multiple Oath Keepers members: Caleb Berry, Jon Schaffer, Graydon Young and Mark Grods. All four are now cooperating with the government, and depending on how U.S. District Judge Amit Mehta rules, they may come to regret pleading to that specific felony that is technically punishable by up to two decades in prison.

Though wide ranging in its scope, the roughly two-hour hearing focused largely on motions argued by lawyers for charged Oath Keepers Donovan Crowl and Connie Meggs.

Those attorneys targeted the language of the obstruction statute, which broadens an anti-witness tampering law by penalizing “[w]hoever corruptly otherwise obstructs, influences, or impedes any official proceeding, or attempts to do so.”

Crowl’s lawyer Carmen Hernandez argued during the hearing prosecutors stretched the words “corruptly” and “otherwise” so broadly that they could potentially reach First Amendment-protected speech. She asserted that her client could not have been on notice that, by entering the Capitol with the pro-Trump mob, he risked that serious a penalty under that interpretation of the statute.

“Influencing the Congress, going to Congress […] and making a fool of yourself: That’s what we Americans do,” Hernandez said.

Judge Mehta would not take her analogy quite so far.

“That’s not what your client is accused of doing,” he replied, noting that the Jan. 6 attack was not a typical parade or demonstration.

Despite the stumble by Crowl’s lawyer, Judge Mehta did appear concerned that the statute—a so-called 1512(c)(2) charge under the U.S. Code—could be boundless without some sort of “limiting principle.”

Assistant U.S. Attorney Jeffrey S. Nestler replied that some of the boundaries could be found in the statute.

“Calling one’s legislator and asking him to vote or not vote on a bill is not corrupt,” Nestler said.

Judge Mehta posited a hypothetical, asking whether the statute would be implicated if a protester stood up and shouted: “Stop these proceedings.”

The prosecutor replied that the answer was “likely not,” adding: “The object [in the case at hand] was not to halt the proceeding. The object here was to scare Congress into halting the proceedings.”

Explaining why he believed a limiting principle needed to be articulated, Judge Mehta said that statutes cannot rely on prosecutors saying “Trust us” about their application.

Pressed on whether recent precedent supported that interpretation of the statute, Nestler replied, “The answer to that is easy: It doesn’t frequently come up.”

As chronicled by reporter Marcy Wheeler, U.S. District Judge Randolph Moss asked similar questions in the case against Utah man Brady Knowlton. The judge has not yet issued a ruling.

Judge Mehta also took the obstruction question under advisement in the Oath Keepers case, tabling some other matters before his court.

Roberto Minuta, another Oath Keepers member who served as a bodyguard for former President Donald Trump’s pardoned associate Roger Stone, asked to dismiss count based on purported constitutional violations when an FBI agent allegedly visited his New York tattoo parlor. Judge Mehta tabled that controversy, finding that the matter has not been fully briefed.

Toward the end of the hearing, Judge Mehta gave cutting remarks to a lawyer for Oath Keepers member Thomas Caldwell, who requested a change of venue because D.C. residents supposedly look down upon the “traditional values” he claims his client espouses.

“This brief […] reads less like a legal brief than something you might read in a blog, and that’s not acceptable,” Mehta said, calling his characterization of the document restrained.

After Caldwell’s lawyer David Fischer defended his remarks by pointing to protests against politicians in D.C. area restaurants, the judge noted that the same thing happened to Republican Senate Minority Leader Mitch McConnell in his home state of Kentucky.