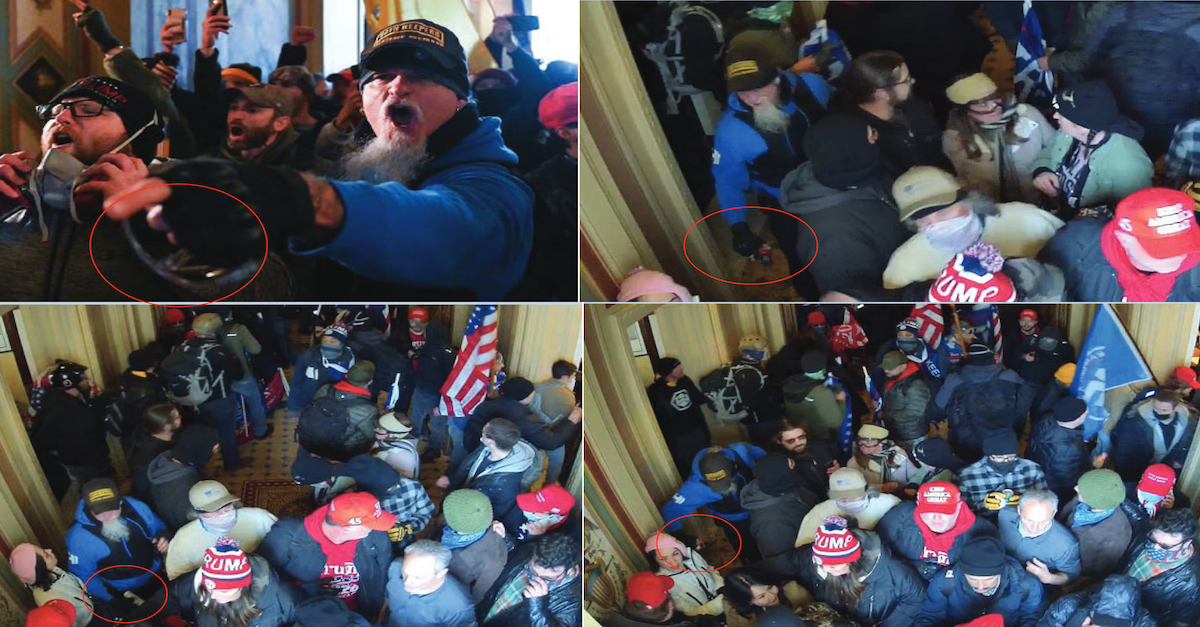 A heavy metal guitarist seen wearing an “Oath Keepers Lifetime Member” cap on Jan. 6 became the first rioter to plead guilty to charges related to the U.S. Capitol siege, a fate entered before a federal judge on Friday.

Although the maximum penalty threatened decades of prison, the Iced Earth musician hopes for a sentence much lower than that by agreeing to “fully” cooperate with the government, according to details of his plea agreement that emerged during the hearing. The agreement calls for a recommended sentencing range between 41 and 51 months, but the judge could ultimately sentence outside those numbers.

The Justice Department celebrated the debut guilty plea and cooperation agreement against a man prosecutors described as founding member of the extremist Oath Keepers.

“On this 100th day since the horrific January 6 assault on the United States Capitol, Oath Keepers member Jon Schaffer has pleaded guilty to multiple felonies, including for breaching the Capitol while wearing a tactical vest and armed with bear spray, with the intent to interfere with Congress’ certification of the Electoral College results,” Acting Deputy Attorney General John P. Carlin said in a statement. “The FBI has made an average of more than four arrests a day, seven days a week since January 6th. I commend the hundreds of special agents, prosecutors and support staff that have worked tirelessly for the last hundred days to bring those who committed criminal acts to justice.”

Originally hit with six charges in connection with the U.S. Capitol siege, Schaffer ultimately admitted to a two-count criminal information: obstructing an official proceeding and entering a restricted building with a deadly or dangerous weapon, referring to the bear spray that the guitarist admitted to carrying inside the building.

The FBI’s statement of facts against him show him wielding the spray, but authorities did not claim he used it.

“Schaffer was among the rioters who sprayed United States Capitol Police officers with ‘bear spray,’ a form of capsaicin pepper spray sold by many outdoors retailers, as part of their efforts to push the officers back inside the Capitol and breach the Capitol Building themselves,” an unnamed FBI agent wrote in an affidavit. “Schaffer was photographed and captured on surveillance video carrying ‘bear spray’ and engaging in verbal altercations with Capitol Police officers inside the Capitol Building. Schaffer is seen holding a clear sunglasses in one photograph, and bear spray in other photographs.”

Other U.S. Capitol rioters, like George Tanios and Julian Khater, have been charged for using bear spray against police officers, including against Brian Sicknick, who died the day after Jan. 6th of still-unexplained causes.

Schaffer is quoted boasting to a reporter that he was ready for violence, and he was originally charged with physical violence inside a restricted building, though he did not plead guilty to that count.

“My name’s Jon Schaffer, I’m from Indiana,” he was quoted telling the press in the FBI’s affidavit. “A group of thugs and criminals hijacked this country a long time ago. And now they’re making their big move, and it’s not gonna happen. . . People need to wake up and snap out of the Matrix, because they’re going down. They made the move, they’re messing with the wrong people here, trust me on that. And we needed it to be open like this. Open fraud. Open theft. Because now we see you, and you’re going down, mark my word.”

Asked explicitly if he expected violence on Jan. 6th, Schaffer allegedly replied: “If somebody wants to bring violence, I think there’s a lot of us here that are ready for it.”

“We don’t want that, but if they bring it we’re going to respond to that, trust me,” Schaffer was quoted saying. “We’re not going to merge into some globalist, communist system, it will not happen. There will be a lot of bloodshed if it comes down to that, trust me. The American people will not go for that bullshit once they understand what’s actually happening. So that’s where we’re at. Nobody wants this, but they’re pushing us to a point where we have no choice.”

It was not the first time the heavy metal frontman took extreme positions in his public persona, describing the government as a “criminal enterprise in a 2017 interview touting his self-identification as an anarchist.

Photographs from the FBI’s affidavit show Schaffer wearing a baseball hat emblazoned with the words: “Oath Keeper Lifetime Member.” The Indiana chapter of the Oath Keepers previously denied Schaffer was affiliated with them.

During his hastily assembled hearing for a guilty plea, U.S. District Judge Amit Mehta brought the proceedings into a closed session after Schaffer expressed his intention to plead guilty to the charges. Once the line resumed, Judge Mehta detailed the terms of the cooperation agreement, and Schaffer confirmed that he understood the maximum penalties could add up to 20 years in prison. The actual sentence is expected to be much lower than that.

Satisfied that the pleas were knowing and voluntary, Judge Mehta formally entered them and released Schaffer to his home in Indiana without immediately setting a sentencing date, upon the prosecution’s request. Schaffer will have to report to the supervision of the Northern District of Indiana and seek permission for his travel as a musician.

As the debut cooperation agreement in the Capitol riot docket drew to a close, the judge wished the convicted rioter well.

“Thank you, your honor,” Schaffer replied, as the proceedings drew to a close.

Update—April 16 at 3:04 p.m. Central Time: This story has been updated to include details from Schaffer’s plea agreement with the government.