Oath Keeper Mark Grods Flips on His Friends and Will Cooperate

Oath Keeper Who Raced Golf Carts Through the U.S. Capitol Pleads Guilty to Conspiracy, Will Cooperate With Feds 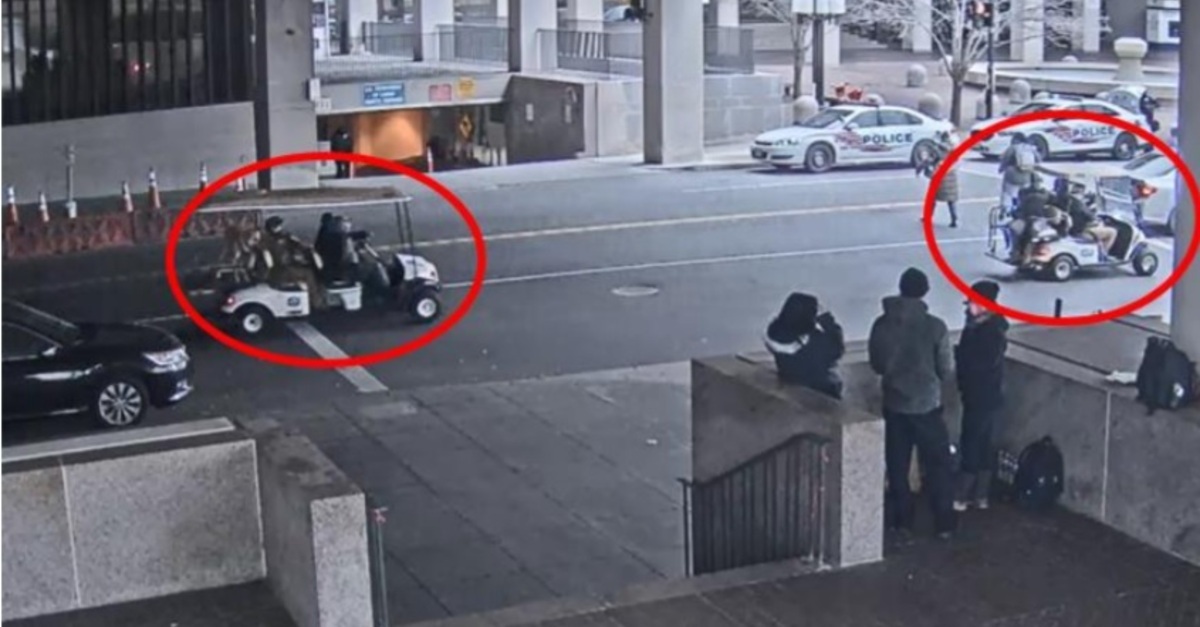 An Alabama man and Oath Keeper pleaded guilty in federal court on Wednesday to charges related to the Jan. 6 attack on the U.S. Capitol.

Mark Grods, 54, agreed to accept culpability for one count each of criminal conspiracy and obstruction of an official proceeding in a deal that will see him cooperate with the prosecution in a wide-ranging case that includes at least 16 members of the far-right militia group.

Court papers previously showed Oath Keepers like Florida chapter leader Kelly Meggs traveling to Washington, D.C., quoting former president Donald Trump’s “will be wild” tweet as inspiration for a plan to “make it WILD.” Grods reportedly was the member of the group previously listed in court papers as “Person 15,” until his case was unsealed.

Those papers put him at the heart of several previously reported Oath Keepers capers, including riding golf carts, communicating via the encrypted walkie-talkie app Zello, and moving around in a military “stack” formation.

According to a criminal information, Grods admitted to bringing “firearms,” into the nation’s capital and “eventually provided them to another individual to store in a Virginia hotel.”

“On January 6, 2021, Grods and others known and unknown rode in a pair of golf carts towards the Capitol, at times swerving around law enforcement vehicles,” the information states. “At 2:33 p.m., Grods and others known and unknown parked the golf carts near the intersection of Third Street and Pennsylvania Avenue, Northwest. They then continued on foot towards the Capitol.”

Grods and others in the alleged conspiracy agreed to plan and participate in a military-style operation that was intended to interfere with the certification of Electoral College votes by the U.S. House of Representatives, the document says.

According to prosecutors, Grods and other co-conspirators took several steps toward completing their desired aim including “[a]ttending or scheduling trainings to teach and learn paramilitary combat tactics in advance of the January 6 operation” and “[u]sing websites, social media, text messaging, and messaging applications to recruit other individuals to travel to Washington, D.C., to support the January 6 operation.”

Grods also allegedly coordinated in advance with other Oath Keepers and fellow travelers and discussed “joining forces” with such individuals and groups in order to stop the counting of votes that certified Biden’s victory over the 45th president, prosecutors say.

The charging document alleges the defendant committed the following overt acts in the days leading up to the riot:

On January 2, 2021, Grods messaged another individual on Signal and asked, “So I guess I am taking full gear less weapons? Just reading through all the posts. Would rather have it and not need it.”

Prosecutors say that Grods and others ultimately moved together in a military “stack” formation–where individuals moved together with their hands on one another’s shoulders–while using hand signals “to maintain communication and coordination while advancing toward the Capitol” on the day in question and that the group was able to “[f]orcibly storm past exterior barricades, Capitol Police, and other law enforcement officers” before making their way into the national legislative seat of government.

The information in Grods’s case was previously kept under seal until Wednesday morning. A judge agreed to that request so that Grods could provide grand jury testimony.

“Disclosure of these documents and this docket would endanger other aspects of the government’s ongoing investigation, including the destruction of evidence and the safety of potential witnesses, to include the defendant,” the prosecution wrote in a memo.

According to CBS News, the judge overseeing Grods’s case said that recommended sentencing guidelines would result in a prison term of between 51 to 63 months with a fine anywhere from $20,000 to $250,000 plus an additional $2,000 in agreed upon restitution.

Read the full criminal information below: