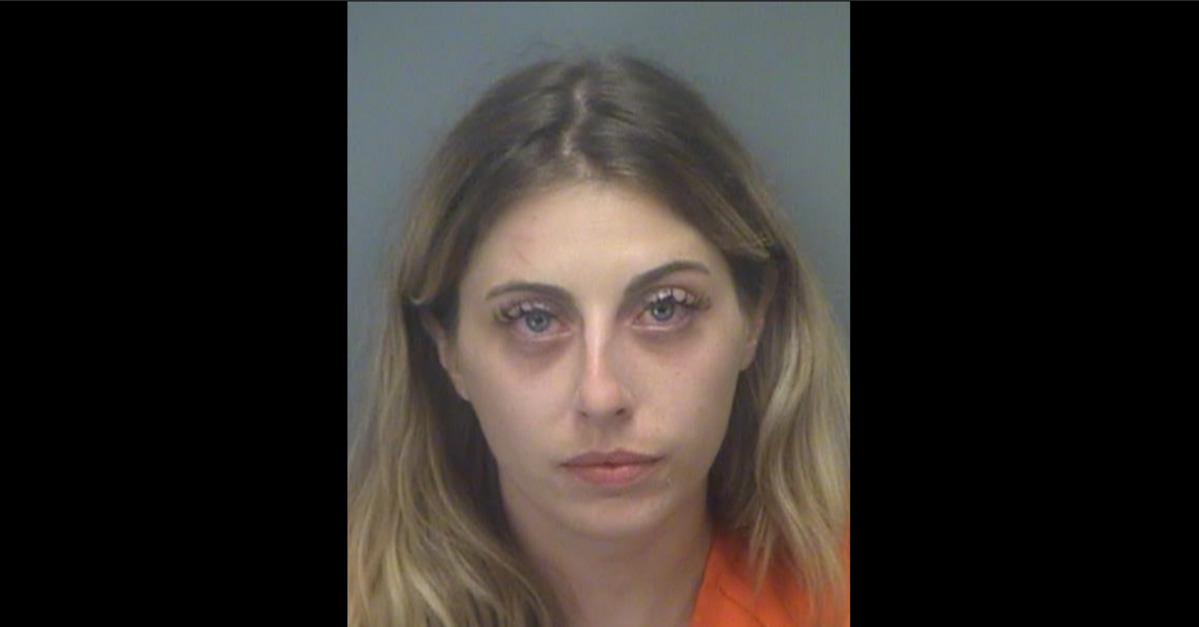 A “completely” naked Boston woman was arrested in Florida over the weekend after allegedly driving a golf cart through an armed standoff.

Jessica Elisabeth Smith, 28, is charged with one misdemeanor count of resisting an officer without violence. She’s accused of embarking on a booze-fueled and clothes-free cruise through a standoff between law enforcement and said-to-be violent suspect.

That suspect, 18-year-old Myles Abbott, was being sought by law enforcement for allegedly firing a weapon near civilians as he tried to elude a trio of Pinellas County Sheriff’s deputies and a K9 on Sunday night. Abbott didn’t actually shoot anyone except himself, authorities say, but his attempt to flee led to a six-hour long standoff where he allegedly took refuge atop the roof of a random person’s home.

Boston, Massachusetts native Smith allegedly entered the picture by breezing past multiple squad cars who had tried to secure a perimeter.

“While PCSO deputies were on perimeter the defendant drove passed [sic] several marked units while driving on a golf cart,” an arrest report obtained by Law&Crime alleges. “The defendant proceeded to drive passed me after I gave her verbal commands as she was approaching the target house of where the armed subject was on the roof.”

According to the police report, the defendant “refused to exit the golf cart” and was then “assisted out” of the vehicle and handcuffed.

“The defendant had a distinct odor of an alcoholic beverage coming from her person and she was completely nude,” Zsido wrote. “The defendant’s actions and inability to follow directions put multiple deputies at risk for potentially getting shot at.”

Smith was booked into the Pinellas County Jail just after 2:30 a.m. and released on her own recognizance just after 7:20 a.m. on Monday.

According to The Smoking Gun, the woman’s parents own a house “about a mile from where she was arrested in Dunedin, a city in the Tampa Bay area.” Pinellas County Sheriff’s Office records note her residence as being in the Roxbury neighborhood of Boston.

Smith is likely to face a fine of up to $1,000 but she could, in theory, spend up to one year in a Sunshine State jail over the incident.

Abbott, on the other hand, is facing substantial prison time.

The alleged gunman stands accused of multiple charges including loitering and prowling, aggravated assault on law enforcement, being a felon in possession of a firearm, carrying a concealed weapon, resisting an officer without violence, and grand theft.

In the end, no one was injured aside from Abbott.

Though several talk-down efforts failed, the standoff never became a shootout and the residents of the home–a family of three with a two-year-old child–kept safe by hiding in a bathroom during the majority of the bizarre episode, according to local NBC affiliate WFLA.

“After nearly 6 hours, specialized equipment and bean bag rounds were used to force Abbott off the roof,” the sheriff’s office said in a statement to local Fox affiliate WTVT. “Deputies from the SWAT Team took Abbott into custody and he was transported to a local hospital for treatment of his self-inflicted gunshot wound. Deputies recovered the firearm and later determined it to be stolen.”