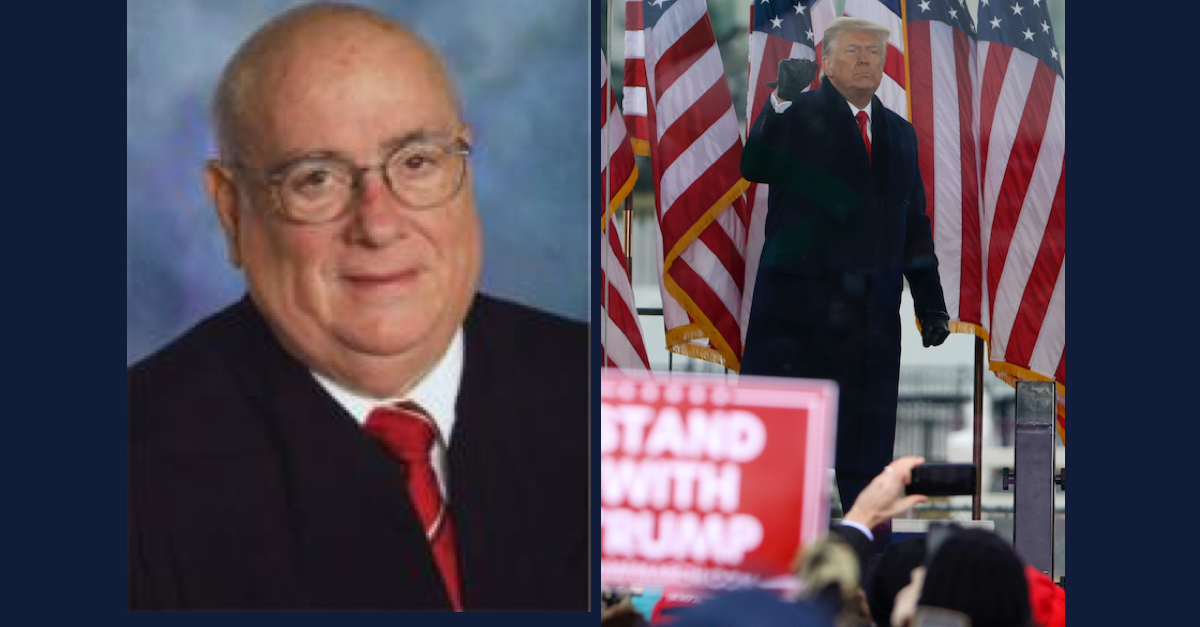 A federal judge says that people convicted of petty misdemeanors in the attack on the U.S. Capitol can be sentenced to both jail time and probation, in one of the first written rulings on an unresolved legal issue before the judges overseeing the Jan. 6 cases.

The ruling comes in the case of James “Les” Little, who Senior U.S. District Judge Royce Lamberth sentenced Monday to 60 days behind bars followed by three years of probation, plus $500 in restitution.

Little had pleaded guilty to one count of parading, demonstrating, or picketing in a Capitol building. He texted friends and family from inside the Capitol and fist-bumped with fellow rioters. He also admitted that as he approached the Capitol that day, he had seen law enforcement use tear gas on the roiling crowd and told investigators he thought police had fired rubber bullets to push people back.

Lamberth said that even though Little didn’t engage in physical violence or property destruction, his behavior, and the behavior of those like him, enabled the crowd of Donald Trump supporters that overran police and swarmed the building in an effort to block Congress from certifying Joe Biden’s win in the 2020 presidential election.

Lamberth, a Ronald Reagan appointee, said that cases like Little’s present a “unique challenge” when it comes to sentencing.

“It cannot be understated that participation of rioters like Little-while not necessarily violent or destructive-was essential in empowering rioters to interrupt the Electoral College certification,” Lamberth wrote. “His conduct calls for a period of imprisonment.”

On “Split Sentences,” D.C. Judges May Be Divided

The parading and picketing misdemeanor 40 U.S.C. § 5104(e)(2)(G) sets for a maximum jail sentence of six months and is classified as a “petty offense.”

The issue of split sentences has loomed ever larger as more Jan. 6 defendants are being sentenced pursuant to guilty please to the parading and picketing charge. The government has argued that the federal probation statute creates a carve-out that allows split sentences for petty offenses, while defense attorneys have said that the statute’s requirement that a federal sentence be limited to either incarceration or probation extends to petty misdemeanors.

In his ruling Monday, Lamberth sided with prosecutors.

Lamberth acknowledged that the federal sentencing statute, 18 USC § 3551(a), allows a sentence of either imprisonment or probation, but not both.

However, Lamberth says that a federal probation statute, 18 USC 3561, “specifically authorizes sentencing courts to impose a term of probation if the defendant is sentenced to imprisonment for only petty offenses.”

(a) In General.—A defendant who has been found guilty of an offense may be sentenced to a term of probation unless—

According to Lamberth, that statute creates a specific carveout for petty offense convictions.

Judges in the D.C. district have so far been mostly aligned on another issue that threatened to split the bench: whether prosecutors could pursue a felony obstruction charge. On that issue, 11 judges have determined that the charge can be pursued, while only one has gone the other way.

The dividing lines on the split sentences issue might not be so clear.

U.S. District Judge Dabney Friedrich, a Trump appointee who was the first to reject a motion to dismiss the obstruction charge, has bluntly said that she sees it as an “either or” situation.

U.S. District Judge Thomas Hogan, a Ronald Reagan appointee, has said that he didn’t think he had the legal authority to issue a split sentence.

Chief U.S. District Judge Beryl Howell, appointed by Barack Obama, stepped around the matter by issuing a sentence of incarceration as a condition of probation, as did Amy Berman Jackson, also an Obama appointee.

Bill Clinton-appointed judge Collen Kollar-Kotelly amended a sentence that originally included jail time and probation; the DOJ has signaled its possible intent to appeal that decision.

Lamberth himself had previously questioned a split sentence request but declined to rule on it.

“This Court is All Too Familiar With Crocodile Tears.”

In his ruling, Lamberth again expressed his wariness about Jan. 6 defendants who express remorse when it comes time to sentencing, making a thinly-veiled reference to Anna Morgan-Lloyd, who appeared to contradict the statements she made at her sentencing hearing before Lamberth when she was interviewed by Laura Ingraham on Fox News the next day.

“The Court often finds it difficult to ascertain the sincerity of these particular defendants’ remorse,” Lamberth wrote. “Many defendants appear sincere at sentencing, boasting of their purportedly deep shame, regret, and desire to change and be law-abiding citizens. But this Court is all too familiar with crocodile tears. Indeed, one day after being sentenced to probation, another January 6 defendant made statements in an interview that directly conflicted with the contrite statements that she made to the undersigned.”

But as Lamberth noted, no tears—crocodile or otherwise—were anywhere to be found when it came to Little.

“Fortunately, Little’s sentencing does not present this dilemma,” Lamberth wrote. “He is not remorseful for his conduct.”

Little boasted to others during and after the attack that, “We took the Capitol,” and “We are stopping treason! Stealing elections is treason! We’re not going to take it anymore!” And in his statements to the Federal Bureau of Investigation, Little continued to deflect responsibility for the violence onto Antifa, Black Lives Matter, and even the law enforcement officers overwhelmed by the rioters. He blamed Capitol Police officers for failing to prevent him from entering the Capitol. The letter that this Court received with excerpts from Little’s social media further suggests that Little may not fully comprehend the wrongfulness of his actions.

Little’s criminal conviction is not the result of a “setup” or “trap,” he chose to engage in criminal conduct on January 6, despite the obvious indicators at the Capitol that his conduct was wrongful. And contrary to his Facebook post and the statements he made to the FBI, the riot was not “patriotic” or a legitimate “protest,” id. at 5-it was an insurrection aimed at halting the functioning of our government. At his sentencing, Little did not retract any of his prior statements. He didn’t apologize or acknowledge in any way that what he had done was wrong. Instead, he chose to criticize the FBI agents for not reading him his Miranda rights and requested that he be permitted to continue using firearms. (emphasis in decision, citations removed.)

Lamberth said that the only way to realistically hold Little accountable for his actions was to keep an eye on him for a few years.

“Stated plainly, the Court must not only punish Little for his conduct but also ensure that he will not engage in similar conduct again during the next election,” Lamberth wrote.” Some term of imprisonment may serve sentencing’s retributive goals. But only a longer-term period of probation is adequate to ensure that Little will not become an active participant in another riot.”

You can read Lamberth’s ruling, below.

[Images via U.S. District Court for the District of Columbia; Tasos Katopodis/Getty Images]