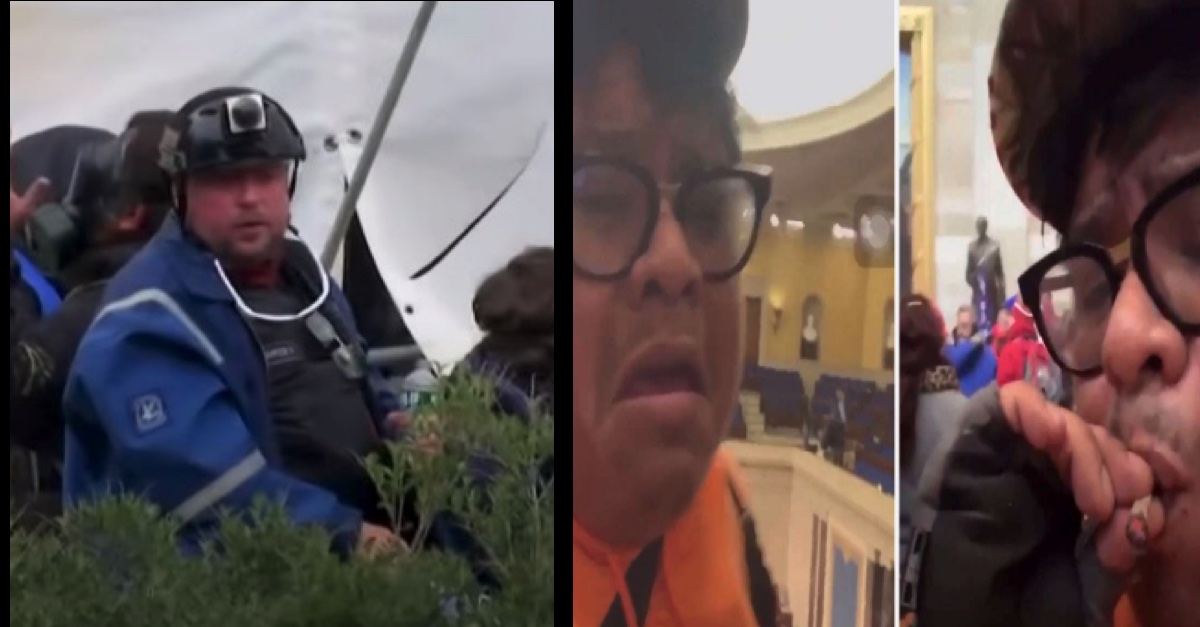 In a ruling Friday, U.S. District Judge Dabney Friedrich denied a motion to dismiss by Ronald Sandlin and Nathaniel DeGrave. Their lawyers had argued that the charge against them brought under 18 USC 1512(c)(2) was improper.

That statute reads as follows:

Sandlin and DeGrave, through their attorneys, had pushed back against that charge on three fronts: that the Electoral College certification of Joe Biden’s win in the 2020 presidential election wasn’t an “official proceeding” for purposes of the statute, that their alleged conduct didn’t “obstruct, influence, and impede” the proceeding, and that the word “corruptly” was unconstitutionally vague.

On Friday, Friedrich, a Donald Trump appointee, rejected all of those arguments.

“Statutes often reach beyond the principal evil that animated them.”

“An ‘official proceeding’ under § 1512(c)(2) does not include any and all series of actions before Congress; rather, the proceeding must be akin to a formal hearing,” Friedrich wrote. “Congress’s Joint Session to certify the electoral results is such a formal hearing.”

Friedrich detailed all the requirements necessary in order for the certification to happen, including the requirement that the vice president, as the Senate president, attend; the specific date (Jan. 6) and time (1:00 p.m.) of the count; and the process of allowing and considering objections.

“The Joint Session thus has the trappings of a formal hearing before an official body,” Friedrich wrote. “There is a presiding officer, a process by which objections can be heard, debates, and ruled upon, and a decision—the certification of the results—that must be reached before the session can be adjourned. Indeed, the certificates of electoral results are akin to records or documents that are produced during judicial proceedings, and any objections to these certificates can be analogized to evidentiary objections. Accordingly, the congressional certification at issue here is a ‘proceeding before the Congress.'”

The defendants had also argued that the term “official proceeding” in the statute only applies to “proceedings that consider and actions related to evidence,” because the first subsection of the statute focuses on the destruction of records and documents.

Friedrich disagreed, writing that “[t]he majority of courts that have considered the interplay between the subsections agree that subsection (c)(2)’s scope is not limited buy subjection (c)(1).”

Noting that section (c) of the statute was enacted as part of reforms that followed the Enron scandal—in which auditors were found to have “systematically and destroyed potentially incriminating documents”—Friedrich said that the statute was meant to address various ways in which obstruction could take place.

“That Congress acted due to concerns about document destruction and the integrity of investigations of corporate criminality does not define the statute’s scope,” Friedrich wrote. “Statutes often reach beyond the principal evil that animated them.”

“Corruptly” Is Not Unconstitutionally Vague

Friedrich also rejected the argument that the word “corruptly” in the statute was unconstitutionally vague.

She first considered the history of courts defining words such as “corruptly” and “wrongful,” and noted that not all attempts to “obstruct, impede, or influence” a proceeding are necessarily wrongful—”for instance, when persuading someone to invoke his or her right against self-incrimination or the marital privilege, or when pursuing valid document retention policies.”

Friedrich concluded that under existing jurisprudence, “corruptly” as used in the statute is not unconstitutionally vague for purposes of charging defendants with breaching the Capitol.

“The ordinary meaning of ‘wrongful,’ along with the judicial opinions construing it, identify a core set of conduct against which § 1512(c)(2) may be constitutionally applied—’independently criminal’ conduct, that is ‘inherently malign,’ and committed with the intent to obstruct an official proceeding,” Friedrich wrote. “‘Corruptly’ (or wrongfully) also acts to shield those who engage in lawful, innocent conduct—even when done with the intent to obstruct, impede, or influence the official proceeding—from falling within the ambit of § 1512(c)(2) (citations omitted).”

Sandlin and DeGrave’s actions at the Capitol on Jan. 6, as alleged in the indictment, meet this standard, Friedrich said.

“Because the indictment alleges that the defendants used obvious criminal means with the intent to obstruct an official proceeding, their conduct falls squarely within the core coverage of ‘corruptly’ as used in § 1512(c)(2),” Friedrich said, adding that further “refinements of the definition of ‘corruptly'” will be included with jury instructions at trial.

“In sum, because the government has alleged that the defendants acted corruptly, or unlawfully, and with the intent to obstruct, as defined in § 1512(c)(2), the defendants were on notice that their conduct violated the statute and ‘no more is required’ at this stage of the prosecution,” Friedrich concluded.

Leaving It Up to the Jury?

Freidrich’s rejection of the arguments in Sandlin’s case, however, may not mean that other challenges to the statutes won’t succeed.

“In contrast to the indictment at issue in Sandlin, the Indictment in this case does not allege any facts in support of the § 1512(c)(2) charge,” Friedrich wrote in a minute order on Saturday in the case of Guy Reffitt, who is accused of storming the Capitol and then threatening his family to keep quiet about it.

Friedrich indicated that the analysis of whether a defendant corruptly attempted to stop the count is fact-specific, and can change from case to case.

“[I]t is unclear, based on the indictment alone, what actions Reffitt allegedly engaged in to obstruct and impede the official proceeding,” Friedrich wrote, adding that “the Court cannot determine at this early stage of the proceeding whether the charges are unconstitutionally vague as applied to him.”

Instead, Friedrich indicated that the issue may be better resolved at trial.

“[T]he Court is inclined to defer ruling on [Reffitt’s] vagueness challenge until the facts have been established at trial and the jury has had an opportunity to consider that evidence,” Friedrich wrote.

However, Friedrich is giving Reffitt a chance to argue why she shouldn’t wait.

“[T]he defendant is directed to file, on or before December 15, 2021, a supplemental brief of no more than 5 pages in length explaining why the Court should not defer ruling on his motion until the evidence has been presented at trial,” Friedrich wrote. “Upon review of the defendant’s supplemental brief, the Court will consider whether a response from the government is necessary.”

Friedrich is one of multiple judges considering the propriety of prosecutors bringing charges under 1512(c)(2).

Read Friedrich’s ruling in the Sandlin case, below.