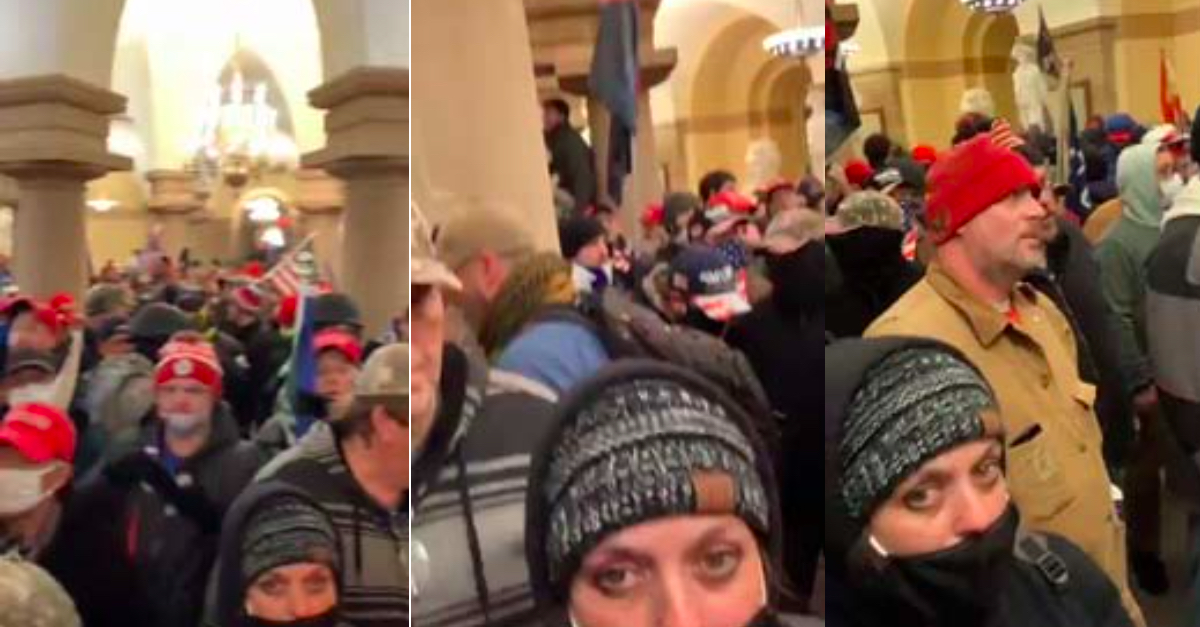 A potential legal issue that has been lurking in the background of Jan. 6 cases may move to the forefront now that federal prosecutors have signaled their intent to appeal a judge’s sentence.

Spencer had pleaded guilty in September to a misdemeanor count of parading, demonstrating, or picketing in the Capitol. She admitted to joining the mob of Donald Trump supporters that overran police to breach the Capitol building as Congress attempted to certify Joe Biden’s win in the 2020 presidential race; she was inside the building for more than 20 minutes.

She and her husband, Christopher Spencer, traveled from North Carolina with their 14-year-old son, who was with the couple when they illegally entered the Capitol building—a fact that Kollar-Kotelly highlighted during Spencer’s sentencing in January.

“I … find it very hard to comprehend why you would bring a 14-year-old minor son to the Capitol,” said Kollar-Kotelly, a Bill Clinton appointee, at Spencer’s hearing. “It must have been a traumatic experience [for him] to witness this kind of violence[.]”

Kollar-Kotelly also told Spencer that her actions reflected “a complete lack of judgment.” She then sentenced Spencer to 90 days in jail and three years of probation.

Spencer’s lawyer, Allen Orenberg, challenged that sentence just days later, arguing that a sentence of jail and probation, a combination that has been referred to as a “split sentence” in the context of Jan. 6 cases, is unsupported by law.

Orenberg said that the federal statutes governing sentencing and probation for federal crimes don’t allow for split sentences in the case of petty offenses, such as the parading or picketing charge. The government pushed back, arguing that the federal probation statue created a carveout that would allow split sentences for petty offenses, and pointed to a 2009 appellate decision that came to the same conclusion.

Kollar-Kotelly ultimately sided with Spencer, concluding that she is not authorized under current law to issue split sentences.

“Accordingly, a plain reading of the statutory sections at issue – 3551(b) and 3561– leads to the conclusion that a district court must choose between probation and imprisonment when imposing a sentence for a petty offense,” Kollar-Kotelly wrote in her ruling.

Prosecutors, however, have continued to recommend split sentences in cases where Jan. 6 defendants have pleaded guilty to the misdemeanor parading and picketing charge.

So far, no other judge has issued a ruling on the matter, but some have indicated that the issue will eventually have to be resolved, one way or another.

Senior U.S. District Judge Thomas Hogan, a Ronald Reagan appointee, said during a January sentencing hearing that he didn’t have legal authority to issue a term of incarceration and probation for a petty offense.

Senior U.S. District Judge Royce Lamberth, also a Reagan appointee, declined to rule on the issue during a January sentencing hearing, but indicated that he may issue a written opinion.

U.S. District Judge Amy Berman Jackson, a Barack Obama appointee, briefly raised the issue during a sentencing hearing on Friday, but ultimately decided that because she was issuing a sentence of incarceration only, she would “leave this for another day.”

Although the government’s filing on Wednesday is simply a notice of appeal, and not an appeal itself, it’s possible that this move may bring this looming legal issue one step closer to resolution.