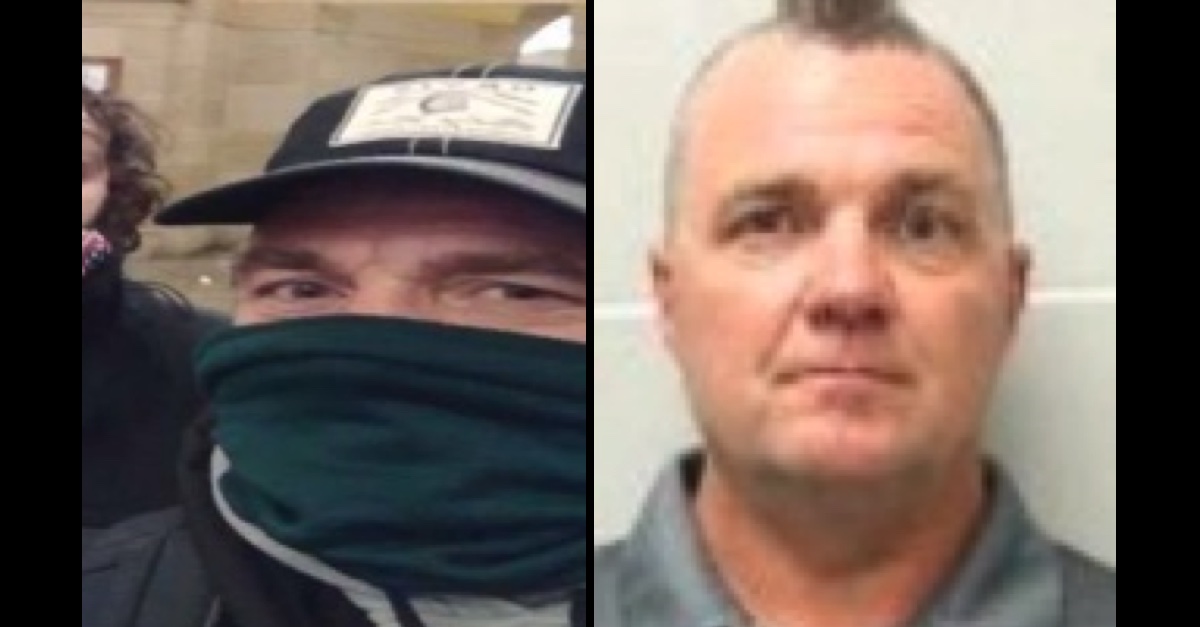 Dealing another Jan. 6 defendant a brief stint in the slammer, the chief judge of the key D.C. district hearing criminal prosecutions of the attack on the U.S. Capitol held the Justice Department’s feet to the fire on Thursday, asking them to consider whether their routine charging of petty offenses helped some view the siege as “legitimate political discourse.”

The judge’s use of the phrase had obvious and pointed echoes. Official GOP leadership stoked outrage earlier this month when they apparently used it to characterize the attack on the Capitol, when they censured two Congress members of their party for investigating it: Rep. Adam Kinzinger of Illinois and Rep. Liz Cheney of Wyoming.

Brian Stenz, 51, had driven with a friend of his daughter’s from Pennsylvania to Washington D.C. to attend Donald Trump‘s “Stop the Steal” rally on Jan. 6, and they joined the crowd that marched to the Capitol. That crowd grew violent and eventually overran police, swarming the Capitol building and temporarily stopping Congress from certifying Joe Biden‘s win in the 2020 presidential race.

Stenz sent pictures of himself inside the Capitol to friends and admitted to entering the office of Sen. Jeff Merkley (D-Ore.), which had been destroyed by rioters. Stenz pleaded guilty in November to a charge of demonstrating, parading, or picketing in the Capitol, a misdemeanor. So far, some 75 Jan. 6 defendants have pleaded guilty to this same charge.

Howell: I Was “Surprised” to See Parading and Picketing Charge in Jan. 6 Prosecutions

At Stenz’s sentencing hearing Thursday, Chief U.S. District Judge Beryl Howell indicated that prosecutors may be sending the wrong message by accepting so many pleas to the relatively light misdemeanor charge.

“Does the government accept some responsibility in its charging and plea offer decisions in all these cases arising out of Jan. 6 for helping to foster some confusion about whether what occurred on Jan. 6 was a ‘protest’ or ‘legitimate political discourse’?” Howell asked shortly after the sentencing hearing started.

Howell was clearly referring to a recent statement by the Republican National Committee describe the mob attack on the Capitol on Jan. 6 as nothing more than “legitimate political discourse.”

That comment from the RNC was part of a censure resolution against GOP representatives Liz Cheney, of Wyoming, and Adam Kinzinger, of Illinois, who have publicly condemned the assault and currently sit on the House committee investigating the events of Jan. 6.

According to Department of Justice numbers, some 140 police officers were assaulted during the siege. The Capitol building sustained around $1.5 million in damage. More than 725 people have been arrested and charged in connection with the attack.

Howell’s question Thursday wasn’t rhetorical. She wanted to know why prosecutors didn’t pursue misdemeanor charges that, as she described, “wouldn’t have fostered this confusion,” such as willfully engaging in disorderly conduct.

“I understand it’s not my role as a judge to make charging or plea offer decisions,” Howell said. “But I have to say I have been curious throughout the last year why it is, when there are other petty offenses with the same penalties clearly appropriately applied to the conduct on Jan. 6, and in fact charged in the information in this case, that the government is choosing to also plead to parading, demonstrating, and picketing when it has other options available to it, and I wanted to give the government an opportunity to explain that choice.”

The parading, demonstrating, or picketing charge provides for up to six months of jail time and a fine.

Prosecutor Grace Albinson told Howell that such “policy decisions” were made by DOJ management, and that while she understood Howell’s frustrations, she wasn’t the right person to address the judge’s questions.

Howell then turned to prosecutor James Pearce, who has been at the forefront of the Justice Department’s push for so-called “split sentences” in misdemeanor Jan. 6 cases.

“I don’t mean to put you in an uncomfortable position either,” Howell said. “I am very curious, particularly as in the public discourse there continues to be a theme that what happened on Jan. 6 was a protest gone wrong by some people. So I want to give the government an opportunity to explain its choice. I’m not second-guessing it. I’m questioning and wondering whether there’s an acknowledgment that that choice has helped confuse the issue.”

Pearce reiterated what Albinson said—that such decisions are a “policy-level determination—and said that it’s not the government’s role to be “engaged with the political conversation” about the political significance of Jan. 6.

“What we are doing is ensuring criminal responsibility for what happened on Jan. 6,” Pearce said, adding that, as in other prosecutions not related to the Capitol attack, the government pursues charges it thinks it can prove beyond a reasonable doubt.

Howell said that a parading and picketing conviction is more like a “ticket” given to people who interrupt meetings.

“I was surprised to see them brought into the Jan. 6 cases,” she said. “And I take it from what you’re saying … the government does not acknowledge responsibility in the confusion in some parts of the public about whether it was just a protest on Jan. 6 that may be due in part to the fact that its primary petty offense charge [in plea agreements] is the parading charge.”

Pearce responded that it was not the government’s intention to cause confusion, and that it has “affirmatively and strongly” maintained that Jan. 6 was no mere protest.

“There’s no question that there were people inside the Capitol building who were terrorized,” Howell responded.

“To the extent our charges have created any confusion, I apologize,” he said. “That [was and is] certainly not our intention.”

Howell is at least the second judge in recent days to directly challenge the framing of the Jan. 6 attack on the Capitol as “legitimate political discourse.” She also made similar comments at a subsequent sentencing hearing in another case Thursday, although the prosecutor there said that she didn’t have more to add other than what Pearce said during Stenz’s sentencing.

Howell then briefly turned to the issue of so-called “split sentences” in Jan. 6 cases.

A split sentence, in the context of Jan. 6 cases, is one where a defendant is sentenced to both time behind bars and probation. Some judges have said such a sentence may stand on shaky legal ground, and a judge who had issued such a sentence subsequently amended it, eliminating the probation part of the sentence.

The Justice Department has signaled its intention to appeal that amended sentence.

At the heart of this legal issue is whether federal statutes governing sentencing and probation for allow for split sentences in the case of petty offenses, such as the parading or picketing charge. The government has argued that the federal probation statue created a carveout that would allow split sentences for petty offenses, and has cited a 2009 appellate decision that came to the same conclusion.

Judges, so far, aren’t so sure.

But at Thursday’s hearing, Howell decided she didn’t need to reach the issue. She asked Pearce, the prosecutor, for confirmation from the government about an alternate theory that would allow her to issue a sentence of both incarceration and probation.

“If I thought two weeks incarceration was appropriate in this case, I could simply do it as a specific condition of probation,” Howell said. “Do you agree with that?”

Howell “Very Skeptical” That Stenz Was Truthful in FBI Interview

Stenz, 51, had pleaded guilty in November to the parading and picketing charge. He drove with a friend of his daughter’s from Pennsylvania to Washington D.C. to attend Trump’s “Stop the Steal” rally, and they joined the crowd that marched to the Capitol.

Once Stenz and his friend—who hasn’t been publicly identified, but who the government has indicated is close to arresting, no thanks to Stenz—entered the building, they went to Merkley’s office. Although that office had been destroyed by rioters, and a laptop was stolen, the government didn’t have evidence that Stenz had engaged in any of that destruction.

For his part, Stenz insisted that he believed he was in a library or a bookstore at the time.

Much of the hearing focused on Stenz’s criminal history. He has five previous misdemeanor criminal convictions, and served time behind bars, although how much time was unclear, due to a possible discrepancy between what Stenz had indicated and what was in the probation department’s pre-sentence report.

Howell noted that when Stenz participated in the Jan. 6 riot, he had criminal charges pending in Pennsylvania for falsifying records while trying to purchase a gun.

Defendants who commit new offenses while criminal charges are pending in another case “are a big red flag,” Howell said.

Howell was also incredulous that Stenz claimed he didn’t know the last name of his companion, with whom he had travelled across state lines and spent the entire day at the Capitol.

“I’m very skeptical that Mr. Stenz told the truth to the FBI when he said he only knew the friend’s first name and not his last name,” Howell said.

Marrone, and later Stenz, both insisted that Stenz didn’t know the last name of his friend, and that all Stenz knew of him was that he was a friend of his daughter who was, in Stenz’s words, a “big Trump guy” in his 20s.

Marrone urged Howell to consider Stenz’s personal life in fashioning an appropriate sentence, including his “longstanding relationship” with his wife, and the fact that he has three children and a job.

“He’s also in a prayer group,” Marrone added, “which shows that he’s a Christian man. This is not a man that is a terrorist or anything of that nature.”

“You would agree that people who were legitimately working inside that Capitol building, [including] the Vice President, members of Congress, their staff, news media, children who were there watching this historic event, who were evacuated, who hid under tables [and] behind locked doors, you would admit they were terrorized, right?” Howell asked.

“There’s no question, and he’s embarrassed by that,” Marrone said.

In the end, Howell sentenced Stenz to two weeks in jail, plus two months of home confinement and three years of probation.

“I do believe special conditions with a short period of confinement as an alternative to a sentence of imprisonment is necessary here,” Howell said, citing Stenz’s criminal history and his decision to enter Merkley’s office in the Capitol building.

Howell specifically noted that Stenz’s probation sentence would last through the next two election cycles “so that he does not engage in political violence” like Jan. 6 again.

Howell also ordered Stenz to pay a $2,500 fine in addition to the $500 in restitution for damage to the Capitol that has become standard in Jan. 6 plea agreements.