‘Some Term of Imprisonment Is Essential’: Judge Sentences N.C. Man Who Fist-Bumped Rioters, Texted Family Inside Capitol on Jan. 6 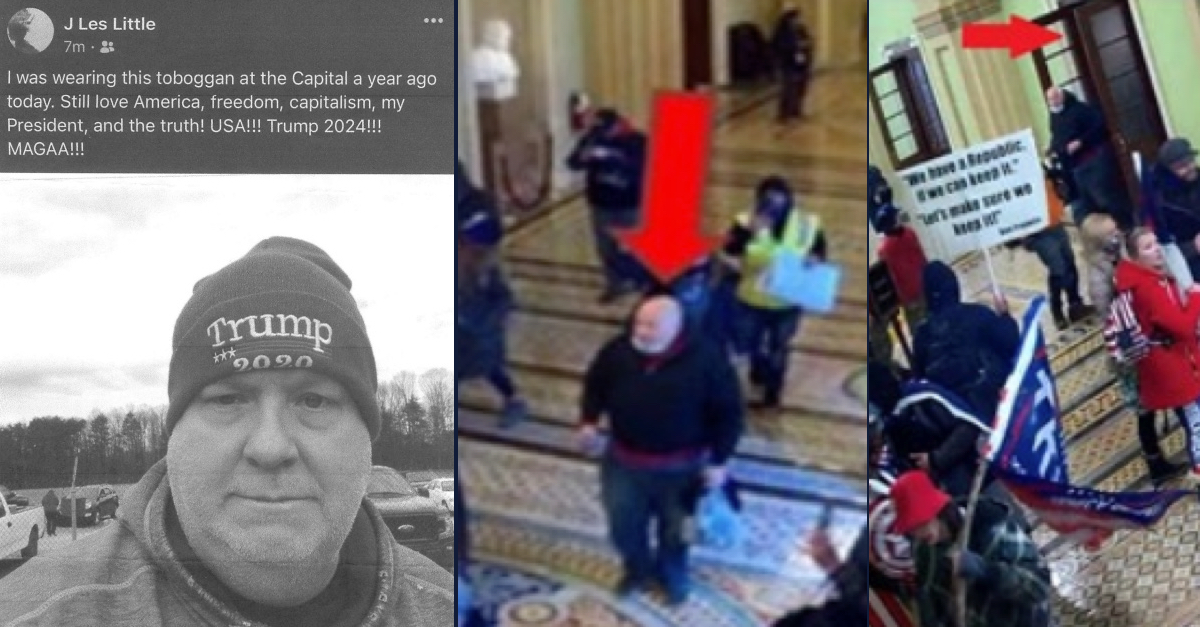 A federal judge has sentenced a North Carolina man who texted friends and family and fist-bumped with fellow rioters while inside the Capitol on Jan. 6 has been sentenced to two months behind bars followed by three years of probation.

James “Les” Little, 51, pleaded guilty in June to a misdemeanor count of parading, demonstrating, or picketing in the Capitol building. He admitted that as he approached the Capitol that day, he had seen law enforcement use tear gas on the roiling crowd and told investigators he thought police had fired rubber bullets to push people back.

Despite personally witnessing that violence, however, he still entered the building.

Senior U.S. District Judge Royce Lamberth told Little on Monday that he believes a term of incarceration is “essential in these cases” relating to Jan. 6, when a mob of Donald Trump supporters broke through police lines and breached the Capitol building as Congress attempted to certify Joe Biden’s win in the 2020 presidential election.

“I believe some term of imprisonment is essential in these cases now to reflect the seriousness of the offense, respect for the law, and [to] provide just punishment,” Lamberth said.

Lamberth, a Ronald Reagan appointee, recalled the decision he made to sentence another Jan. 6 defendant to probation only—a decision he has clearly come to regret since that defendant, Anna Morgan-Lloyd, appeared to contradict the statements she made at her sentencing hearing when she was interviewed by Fox News’ Laura Ingraham the next day.

Lamberth’s sentence exceeds the government’s request of 30 days in jail followed by three years of probation. It also places stringent limits on Little’s social media activity while on probation.

During the sentencing hearing, Little’s lawyer Peter Adolf said that Little shouldn’t be sent to jail for walking through the Capitol’s “open doors.”

Little “didn’t know what was going on” before he went through the doors, Adolf said.

“I can’t agree with that,” Lamberth said, interrupting Adolf. “He knew exactly what was going on … they were open because the police had been overwhelmed. Don’t misstate things there.”

Adolf also implied that Little may have an undiagnosed autism spectrum disorder that contributed to his decision to storm the Capitol, noting what he described as Little’s “awkward” interactions with friends and family members, and what Adolf described as a “child’s sense of fairness” that prevented him from accepting what he felt was a stolen presidential election.

“They didn’t have names for that back in the late 70s when he was being diagnosed” by a child psychologist, Adolf said. “He shows all the signs of those behaviors.”

Adolf, a federal public defender, added that he didn’t have Little professionally evaluated for autism spectrum disorder because he couldn’t see spending thousands of government dollars for sentencing on a petty offense.

“Mr. Little is not a child,” prosecutor Michael James said in response to Adolf’s speculation, adding that there is no record of Little “suffering” from autism and that the pre-sentencing report noted that he is “emotionally stable,” aside from anxiety about his pending sentencing hearing.

“He’s not someone who is so blindly led [that] he didn’t know what was going on,” James said.

In issuing a sentence of prison followed by probation, or a “split sentence,” Lamberth took a clear stance on a looming legal issue among D.C. district judges overseeing Jan. 6 cases as to whether such a sentence is allowed for petty misdemeanor pleas.

On Monday, Lamberth signaled that he believes that, indeed, the law allows him to do so and would issue a written opinion endorsing that position.