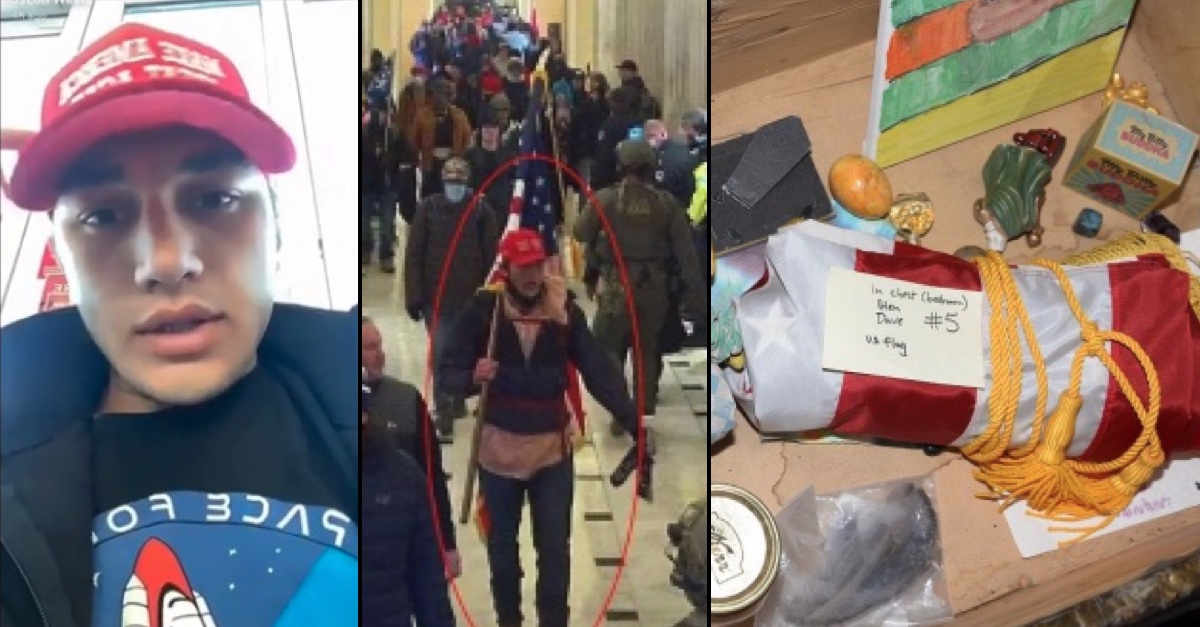 A federal judge has sentenced the Utah man who took a decorative flag from inside the U.S. Capitol on Jan. 6 to three years of probation, including three months of home detention, with the specific aim of keeping tabs on the man through the next presidential election.

Jacob Wiedrich, 24, was among the hundreds of Donald Trump supporters who stormed the Capitol on Jan. 6 in an effort to stop the certification of Joe Biden‘s win in the 2020 presidential election.

Prosecutors say that Wiedrich joined the mob outside the Capitol building, yelling at police officers through broken windows and pushing past a line of cops trying to keep the crowds away.

Once inside the building, Wiedrich stole a large American flag decorated with gold tassels. Investigators later recovered the flag while searching his home pursuant to a warrant. Wiedrich had been keeping it inside a wooden chest in his room.

Wiedrich also recorded video as he breached the Capitol, and posted comments to social media indicating a total lack of remorse, prosecutors said.

He pleaded guilty in October to one count of parading, demonstrating, or picketing in the Capitol building, a misdemeanor.

That charge carries a potential sentence of six months behind bars. Prosecutors had asked for three months in jail followed by three years of probation. Wiedrich had asked for 24 months of probation, with the first two months as home detention.

At Wednesday’s sentencing, Senior U.S. District Judge Thomas Hogan said that he had legal authority to sentence Wiedrich to jail or probation, but not both.

“My practice is to give some incarceration,” Hogan said. “I’ve done that in other cases. Your situation is an exception.”

Hogan, a Ronald Reagan appointee, said he decided to sentence Wiedrich to home detention and probation so that he could keep tabs on him through the next presidential election.

“I’m not going to sentence you to incarceration in jail,” Hogan said. “My inclination is to do that. All I do by that is give you a month, [and then] you’re free. There’s nothing else. You’re not responsible to the court for anything.”

Hogan referred to another Jan. 6 case in which a defendant before Senior U.S. District Judge Royce Lamberth appeared to express remorse for her participation in the Jan. 6 riots. That defendant—possibly Anna Morgan-Lloyd, although Hogan did not name her—took civics courses and watched movies about problems people had living under oppressive regimes, and Lamberth, also a Reagan appointee, sentenced her to probation.

“Within a week she went on a Fox News broadcast,” Hogan said. “She said it was simply a lovely afternoon and nothing happened.”

Hogan told Wiedrich that he didn’t want a repeat of that incident.

“I think it’s far better to put you under restrictive probationary terms for a long period so I can be assured that you won’t fall into a violent political protest again,” Hogan added.

Hogan said he set the sentence specifically to “cover the next general election to make sure you do not fall victim to following false gods again.”

Hogan also said that he wanted Wiedrich understood the full seriousness of the Jan. 6 Capitol attack, calling it a “total tragedy which is going to affect this country for many, many years.”

Hogan took particular note of what Wiedrich recorded himself saying: “We ride for Trump, we die for Trump!”

“This is the first time I’ve ever heard an American saying that they would die for a political candidate,” Hogan said. “Maybe this is common in other countries, like dictatorships and monarchies, but not in America.”

However, Hogan said, Wiedrich is a “young man who I think has a lot of potential,” and praised him for attending trade school and moving into his own apartment.

Wiedrich told Hogan that he wants to participate in politics but plans on taking a different approach going forward.

“I am passionate about politics, but I plan on doing it the right way from here on out, doing local school meetings and more local politics,” Wiedrich said.

“I hope you understand that you have to read and understand the issues, both sides, and not follow false information,” Hogan told him.