New York Accountant Who Wanted to ‘Rest’ Inside Capitol Conference Room on Jan. 6 Gets Probation 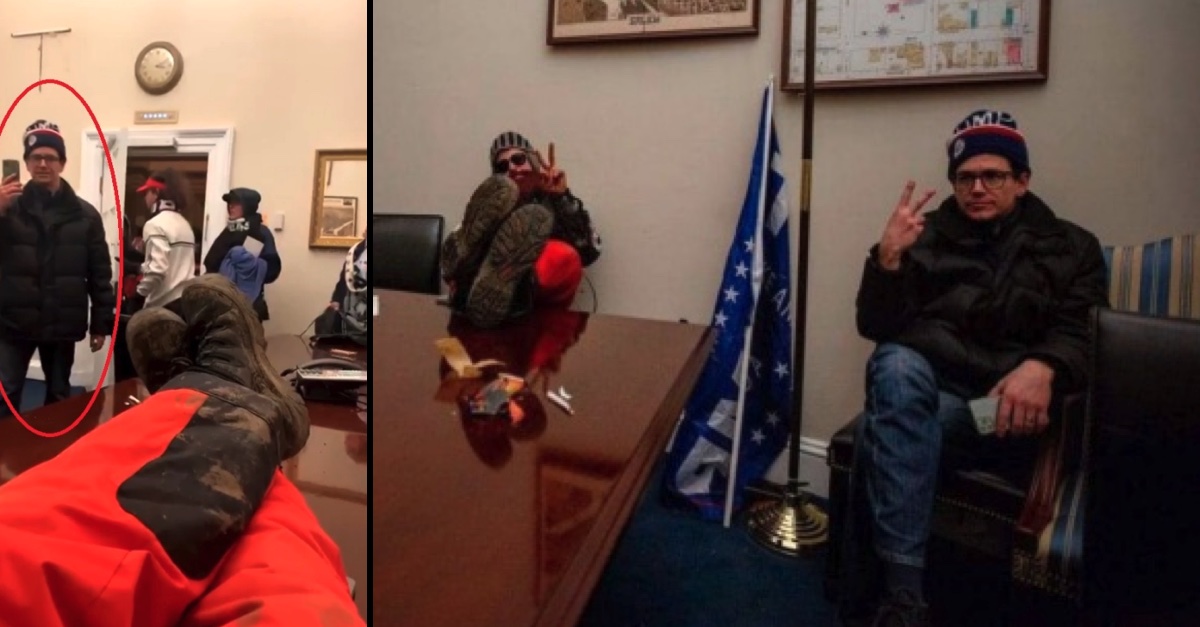 A man who decided to “sit down and rest” in a conference room in the Capitol building on Jan. 6 has been sentenced to home detention and probation.

Justin McAuliffe, 40, had been on his feet for more than 11 hours by the time he reached the Capitol building after attending then-President Donald Trump’s so-called “Stop the Steal” rally. He entered the Capitol through the Senate Wing doors about 20 minutes after it had been breached for a second time by the mob of Trump supporters looking to stop Congress from certifying Joe Biden’s win in the 2020 presidential election.

Shortly after entering the building, McAuliffe, a certified accountant from New York, found a conference room. He went inside, sat for a while, and then left when police asked him to leave.

He pleaded guilty in November to parading, demonstrating, or picketing in a Capitol building, a misdemeanor charge that carries a penalty of up to six months in jail.

At Friday’s sentencing hearing, prosecutors acknowledged that McAuliffe was neither violent nor destructive that day.

“We have no evidence that Mr. McAuliffe did anything other than sit down and rest in this room,” Assistant U.S. Attorney Jacob Strain said. “He took videos and pictures on his phone. When police eventually came in and asked everybody to leave, he complied and left the building.”

Nevertheless, prosecutors asked for a sentence of 14 days’ incarceration, three years of probation and $500 in restitution. McAuliffe requested probation only.

McAuliffe’s attorney Richard D. Collins said that McAuliffe has already paid a significant price for his participation in the Capitol riots.

The government’s sentencing request raised a legal issue that’s been simmering in the D.C. district courts and could soon come to a boil. The recommendation for incarceration followed by probation, known as a “split sentence,” for convictions under the parading and picketing charge, may stand on shaky legal ground.

The issue is whether the federal probation statute also allows for a term of incarceration in certain offenses, a question that has not previously been widely addressed.

“In the early days, as we were trying to figure out our position, we didn’t recommend this with much frequency,” Pearce said, adding that the government is “recommending it fairly widely at this point.”

Lamberth declined to rule on the issue of split sentences during Friday’s hearing, but he did say that he would likely issue a written opinion, in case of a possible appeal.

“These Are Serious Crimes”

When it came time to sentencing McAuliffe, Lamberth, a Ronald Reagan appointee, noted his inclination to sentence Jan. 6 defendants to some period of incarceration, regardless of whether or not they engaged in violence at the Capitol.

“I don’t agree across the board with probation as a solution to these cases, even when the defendant now comes forward as you have and admits that it was all wrong and professes to have changed their mind,” Lamberth said, noting that the first defendant he put on probation—likely Anna Morgan-Lloyd, although he did not name her specifically—”contradicted herself” the day after sentencing.

Lloyd memorably was interviewed on Fox News’ The Ingraham Angle the day after being sentenced to probation, telling host Laura Ingraham that she didn’t believe the events of Jan. 6 amounted to an insurrection.

After indicating that he would sentence McAuliffe to a sentence of probation, Lamberth said he wasn’t entirely sure if it was the right thing to do.

“I worry about whether that sends the right message to the public,” Lamberth said.

Lamberth said that understands the perception that courts have been too lenient with Jan. 6 defendants.

“The public has the right to have the law enforced,” Lamberth said to McAuliffe. “The public has a perception of what happened at the Capitol that day that is not wrong, and that is that the court here has been too easy on defendants in your position.”

Lamberth recalled slain civil rights leader Martin Luther King Jr. and his “Letter from Birmingham Jail,” which he wrote from behind bars after being arrested for violating Alabama’s law against mass public demonstrations.

Lamberth acknowledged he was giving McAuliffe a “break” by sentencing him only to probation and home detention.

“A judge has to have mercy,” he said.