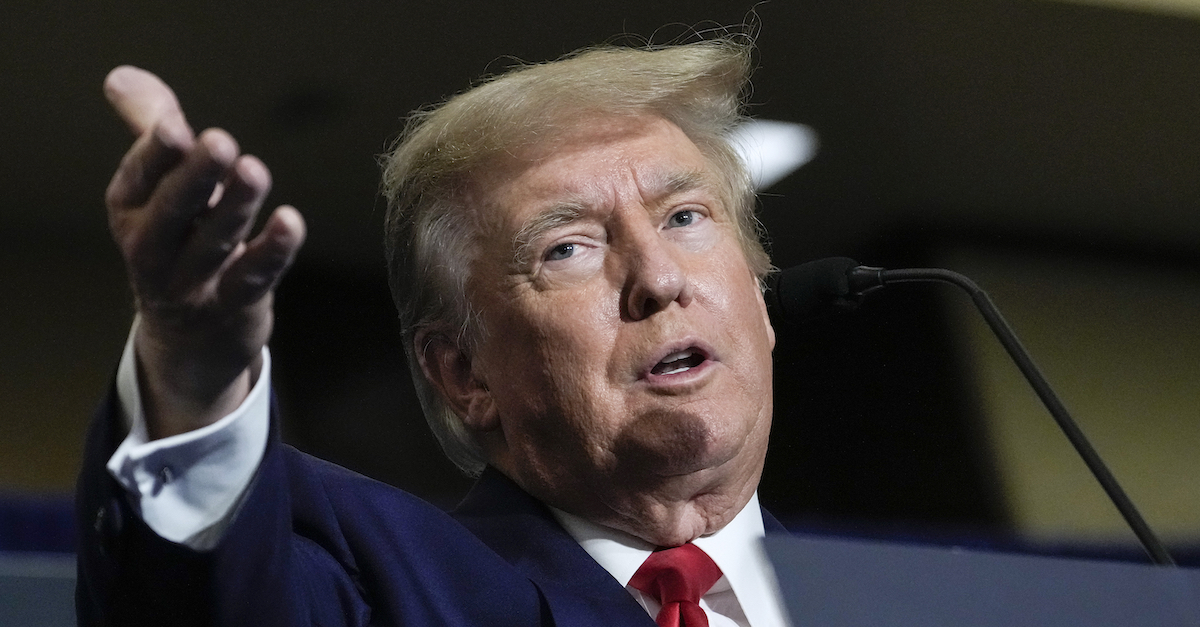 Portions of the affidavit filed by the FBI in connection with the Aug. 8, 2022 search of former President Donald Trump’s Mar-a-Lago estate and home have been released pursuant to a magistrate judge’s order.

On Friday, just before noon, U.S. Magistrate Judge Bruce E. Reinhart ordered the document and several others to be unsealed.

The introduction to the affidavit reads as follows:

The government is conducting a criminal investigation concerning the improper removal and storage of classified information in unauthorized spaces, as well as the unlawful concealment or removal of government records. The investigation began as a result of a referral the United States National Archives and Records Administration (NARA) sent to the United States Department of Justice (DOJ) on February 9, 2022, hereinafter, “NARA Referral.” The NARA Referral stated that on January 18, 2022, in accordance with the Presidential Records Act (PRA), NARA received from the office of former President DONALD J. TRUMP, hereinafter “FPOTUS,” via representatives, fifteen (15) boxes of records, hereinafter, the “FIFTEEN BOXES.” The FIFTEEN BOXES, which had been transported from the FPOTUS property at 1100 S Ocean Blvd, Palm Beach, FL 33480, hereinafter, the “PREMISES,” a residence and club known as “Mar-a-Lago,” further described in Attachment A, were reported by NARA to contain, among other things, highly classified documents intermingled with other records.

The document says the FBI opened a “criminal investigation” into, “among other things,” how the documents were removed from the White House or any other secured location.

“The FBI’s investigation has established that documents bearing classification markings, which appear to contain National Defense Information (NDI), were among the materials contained in the FIFTEEN BOXES and were stored at the PREMISES in an unauthorized location.”

A significant portion of the document explains the federal government’s system of classification for secret materials and bemoans — in a hypothetical sense — what could happen if secrets fell into the wrong hands. The document also takes excruciating steps to explain the underlying law.

While articulating probable cause for the search, the document asserts that news reports indicated that moving trucks were spotted at Mar-a-Lago and that an investigation from the National Archives and Records Administration uncovered the following:

The NARA Referral stated that according to NARA’s White House Liaison Division Director, a preliminary review of the FIFTEEN BOXES indicated that they contained “newspapers, magazines, printed news articles, photos, miscellaneous print-outs, notes, presidential correspondence, personal and post- presidential records, and ‘a lot of classified records.’ Of most significant concern was that highly classified records were unfoldered, intermixed with other records, and otherwise unproperly [sic] identified.”

Significant portions — at times entire pages — of the probable cause section of the document are blacked out.

However, the document does assert that the retrieval process was slow:

On or about May 6, 2021, NARA made a request for the missing PRA records and continued to make requests until approximately late December 2021 when NARA was informed twelve boxes were found and ready for retrieval at the PREMISES.

An eventual review of the material yielded the following:

The affidavit then explains that Trump’s counsel suggested Trump had an “absolute authority to declassify documents.”

The Department of Justice eventually wrote to Trump’s counsel to assert that Mar-a-Lago was not an “authorized” location in which to “store classified information.”

“There is probable cause,” the affidavit asserts, “to believe that documents containing classified NDA and presidential records remain at the premises.”

The document also asserts that the documents were kept in more than just a storage room at Mar-a-Lago. The affidavit states that the FBI believed the material was also housed in Trump’s “residential suite,” in a location listed as “Pine Hall,” and in the “45 Office.”

“Accordingly, this affidavit seeks authorization to search the ’45 Office’ and all storage rooms and any other rooms or locations where boxes or records may be stored within the PREMISES,” the document asserts.

Trump responded to the redacted affidavit his own social media platform:

Affidavit heavily redacted!!! Nothing mentioned on “Nuclear,” a total public relations subterfuge by the FBI & DOJ, or our close working relationship regarding document turnover – WE GAVE THEM MUCH. Judge Bruce Reinhart should NEVER have allowed the Break-In of my home. He recused himself two months ago from one of my cases based on his animosity and hatred of your favorite President, me. What changed? Why hasn’t he recused himself on this case? Obama must be very proud of him right now!

Prosecutors did not oppose the unsealing of virtually all of the warrant itself, several attachments, and the property receipt — all of which are among a batch of documents collectively known as the “warrant package.”

Those materials revealed that Reinhart signed the warrant “after finding probable cause that evidence of multiple federal crimes would be found” at Mar-a-Lago.  They also listed several key statutes governing the materials — including some under the Espionage Act.

The list of items to be searched were described accordingly:

b. Information, including communications in any form, regarding the retrieval, storage, or transmission of national defense information or classified material;

d. Any evidence of the knowing alteration, destruction, or concealment of any government and/or Presidential Records, or of any documents with classification markings.

Among the items seized were the executive grant of clemency for Roger Stone, information regarding the president of France, a “[l]eatherbound box of documents,” and “[v]arious classified/TS/SCI documents.” Also listed were a handwritten note, binders of photos, a “[p]otential [p]residential [r]ecord,” and “[m]iscellaneous” secret, top secret, and confidential documents. A collection of boxes described as bearing various alphanumeric codes were also taken from the palatial Palm Beach premises.

Despite those revelations from the warrant package, the affidavit itself “present[ed] a very different set of considerations,” the government wrote on Aug. 15 in response to motions by a collection of activists, observers, and media companies who sought access to the affidavit itself.

Affidavits explain, in concrete and particularized detail, the alleged facts of a criminal matter and where the fruits of a criminal enterprise are suspected to be maintained or found. They are filed in support of the Fourth Amendment’s warrants clause that the government seek judicial permission to search and seize a person’s houses, papers, and effects. An application that is not sufficiently detail may be rejected by a judge or magistrate who must ascertain whether probable cause exists — a fair probability, that is, that a crime has been committed and that the evidence thereof can be found in a specific place.

The government feared “devastating consequences” to the “reputations and rights of the individuals” named in the document. Additionally, they said that “revealing the specific contents of a search warrant affidavit could alter the investigation’s trajectory, reveal ongoing and future investigative efforts, and undermine agents’ ability to collect evidence or obtain truthful testimony.”

Disclosure at this juncture of the affidavit supporting probable cause would, by contrast, cause significant and irreparable damage to this ongoing criminal investigation. As the Court is aware from its review of the affidavit, it contains, among other critically important and detailed investigative facts: highly sensitive information about witnesses, including witnesses interviewed by the government; specific investigative techniques; and information required by law to be kept under seal pursuant to Federal Rule of Criminal Procedure 6(e). If disclosed, the affidavit would serve as a roadmap to the government’s ongoing investigation, providing specific details about its direction and likely course, in a manner that is highly likely to compromise future investigative steps. In addition, information about witnesses is particularly sensitive given the high-profile nature of this matter and the risk that the revelation of witness identities would impact their willingness to cooperate with the investigation. Disclosure of the government’s affidavit at this stage would also likely chill future cooperation by witnesses whose assistance may be sought as this investigation progresses, as well as in other high-profile investigations. The fact that this investigation implicates highly classified materials further underscores the need to protect the integrity of the investigation and exacerbates the potential for harm if information is disclosed to the public prematurely or improperly.

Prosecutors then said redacting the document would be a problem — though Reinhart eventually jettisoned those arguments:

Unlike the Property Receipt—which the government moved to unseal subject to minor redactions, including to protect the identity of law enforcement officials—the affidavit cannot responsibly be unsealed in a redacted form absent redactions that would be so extensive as to render the document devoid of content that would meaningfully enhance the public’s understanding of these events beyond the information already now in the public record. There is simply no alternative to sealing that could ensure the integrity of the government’s investigation and that would prevent the inevitable efforts to read between the lines and discern the identities of certain individuals, dates, or other critical, case-specific information.

Attorneys for Trump did not directly oppose the release of the document. Rather, they filed a concomitant proceeding to seek a review of the seized materials by a special master — a disinterested party tasked with ferreting out privileged information. The concomitant filing does not directly seek to quash the warrant itself.

The adjacent proceeding is off to a rocky start due to incorrectly filed documents, and additional responses on whether or U.S. District Judge Aileen M. Cannon has asked Trump’s attorneys to answer several key questions before proceeding. Those questions seem centered around whether Cannon even has jurisdiction to hear the matter considering the original warrant remains in Reinhart’s courtroom. Responses are due Friday.

A letter revealed this week by a conservative writer with Trump connections sheds additional light on the matter. The letter, from the National Archives and Records Administration (NARA) to one of Trump’s lawyers, suggests that Trump’s counsel attempted to slow down the transfer of highly classified material back to the federal government. It also argued against the legal concept that the materials could be privileged against the executive branch agencies who sought to recover the material. In essence, the letter asserts that Trump, as a former executive, could not withhold the recovery of material from a subsequent executive or the administrative agencies partially under his control. The NARA letter suggests that that the White House deferred to NARA on how to handle the matter.

The full affidavit is embedded below: