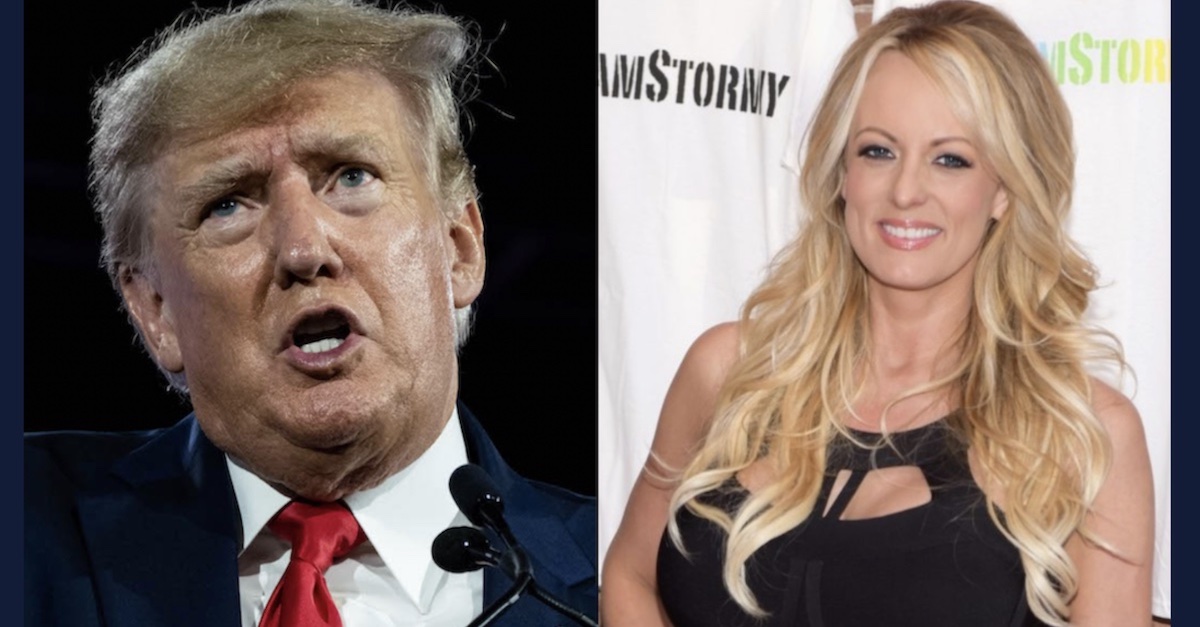 The U.S. Court of Appeals for the Ninth Circuit has ordered former President Donald Trump to mediate with adult film star Stormy Daniels over additional appellate attorney fees in her failed defamation lawsuit against him.

A three-judge panel ruled last week that Daniels must pay Trump’s defense fees for her unsuccessful appeal in her defamation lawsuit against him. But the judges didn’t sign off on the specific $127,122.56 amount requested by Trump’s lawyers, which Daniels’ lawyers called “just not reasonable.”

Instead, they directed Trump and Daniels, whose personal relationship erupted into public warfare in 2018, to the Ninth Circuit’s appellate commissioner, Lisa Fitzgerald. Fitzgerald is experienced with the case: In March, she awarded Trump $245,209.67 in attorney fees for the initial appellate work, about $27,000 less than requested. But she opted not to wade into the dispute over appellate fees last week, instead referring Trump and Daniels to the Ninth Circuit’s mediator “because the dispute in this case could benefit from mediation efforts.”

“Disputes over the amount of attorney fees recoverable on appeal are often settled through the court’s mediation program,” according to the Sept. 29 order. “The Circuit Mediator is requested to inform the Appellate Commissioner of the outcome of the mediation.”

The mediation order comes amid a pending fee request from Daniels in a lawsuit she filed against Trump in Los Angeles County Superior Court over her nondisclosure agreement. The former president already has been ordered to pay Daniels $44,100 to cover her defense attorney fees at the trial court, but the judgment has been applied to the $292,052.33 Daniels owes him for the money he spent on defense attorney at the trial court level.

All told, Daniels currently owes Trump $493,162. That’s bound to change once the additional fee dispute is decided, and Daniels’ attorneys also have a pending motion in LA Superior Court seeking an additional $52,036.25 in attorney fees and $2,400 in costs. But by all calculations, the litigation is destined to end with Daniels owing Trump much more than he’s been ordered to pay her.

Trump’s lawyer Harmeet Dhillon told Law &Crime on Tuesday that the new Ninth Circuit order “brings us one step closer to the conclusion of this utterly frivolous litigation that should never wasted the amount of court time and attorney fees it did in both state and federal courts, trial and appellate.”

“On behalf of President Trump, we are gratified that the Ninth Circuit granted our motion and agreed that a further award of attorney fees is owed by Ms. Clifford, and we look forward to the determination of an amount by the court’s appellate commissioner, and to the final conclusion of this matter,” Dhillon said in an email.

“She stood strong — and for truth. I am truly proud to represent her,” Brewster told Law&Crime.

The litigation surrounding the dueling fee awards stems from the lawyering of Daniels’ former lawyer Michael Avenatti, who’s now in federal prison for defrauding her of $148,750 she was due for a book publishing contract. The superior court lawsuit sought to have Daniels released from a nondisclosure agreement she signed with Trump’s personal attorney at the time, Michael Cohen, 11 days before the 2016 election regarding what she’s described as a sexual relationship with Trump in 2006 and 2007. The defamation lawsuit was about a tweet Trump wrote in 2018 after Avenatti and Daniels released a sketch of a man she said threatened her to stay quiet about Trump seven years earlier.

“A sketch years later about a nonexistent man. A total con job, playing the Fake News Media for Fools (but they know it)!” Trump said.

The superior court lawsuit fared better than the federal case. It was dismissed after the agreement as deemed nonenforceable, but Judge Robert B. Broadbelt III declared Daniels the prevailing party and linked Trump directly to the nondisclosure agreement signed under the name David Dennison, citing his admission that he reimbursed the $130,000 Daniels paid to Cohen.

Still, the amount of litigation in the case was dwarfed by the litigation that went into the federal defamation lawsuit, as reflected by now-retired U.S. District Judge S. James Otero decision that Daniels owed Trump $292,052.33 for the work his attorneys did, which included a dismissal motion Otero granted in October 2018. The judge finalized the fee award in December 2018, adding $1,000 in sanctions against Daniels for bringing a frivolous lawsuit.

At the time, Daniels was still represented by Avenatti, and while he appealed Otero’s dismissal order, he never appealed the attorney fee order. Daniels fired Avenatti shortly before federal prosecutors in California and New York unveiled criminal charges against him, and Brewster took over the case. But the Ninth Circuit concluded the appeal Brewster filed in August 2020 over the fee award was too late because Otero’s final fee judgment was in December 2018, and the deadline for appeals is 30 days.

It’s not the only missed deadline that’s played a key role in fee disputes between Trump and Daniels. Last December, California’s 2nd District Court of Appeal cited a missed deadline by Trump’s team when rejecting his appeal of Daniels’ $44,100 fee award.

At issue in that case was a 60-day deadline that Trump’s lawyers said hadn’t been triggered because the clerk’s office mailed a trial court order separately from the related minute order and certificate of mailing. The court didn’t agree and rejected the appeal as untimely.

The blunder wasn’t the doing of Trump’s current lawyers: It was on attorneys at Harder LLP, Charles Harder’s firm. They stopped representing Trump after filing the appeal, and Dhillon and her team took over. She’s currently handling both the LA Superior Court case and the Ninth Circuit case with firm partners Mark P. Meuser and Ronald D. Coleman.

In the LA case, Judge Broadbelt on Nov. 16 is to consider a new motion from Daniels that seeks to make Trump pay for her attorney fees associated with the appeal. The $54,436.25 in fees and costs is for Brewster and his law partner Mbilike Mwafulirwa’s defense of the $44,100 fee award at the 2nd District Court of Appeal. Dhillon said Monday she’ll be filing an opposition brief.

Regarding the mediation order, Ninth Circuit Chief Mediator Stephen M. Liacouras leads a team of seven mediators who mediate full-time for the Ninth Circuit. Neither Dhillon nor Brewster would comment on mediation efforts, but it’s not the first time mediation has been ordered. In November 2020, then-Ninth Circuit Appellate Commissioner Peter Shaw ordered Trump and Daniels to mediate over Trump’s request for attorney fees for his appellate defense of Otero’s dismissal motion. A telephone conference occurred three weeks later, followed by a Dec. 11, 2020, order that said, “Mediation efforts have been exhausted. Accordingly, this case is released from the Mediation Program.”

That led to the $245,209.67 order in March from Fitzgerald, who took over for Shaw after he retired. She got the current fee dispute under a Sept. 27 order from Judges Sidney R. Thomas, Kim McLane Wardlaw and Jacqueline H. Nguyen, who have issued previous orders in the case. Thomas and Wardlaw are 1996 and 1998 Bill Clinton appointees, while Nguyen is a 2012 Barack Obama appointee.

Fitzgerald’s Sept. 29 order sending the issue to the mediation program does not specify who will get the case but said the chief circuit mediator will contact both sides to get the process started.

Read Trump’s full motion for additional appellate attorney fees, filed in April, as well as Daniels’ response, filed in May. Trump’s reply, also filed in May, is posted below, too.