15-Year-Old Boy Randomly Stabbed Couple in Their Sleep, Said He Wandered Around Wanting to ‘Hurt Someone’: Cops 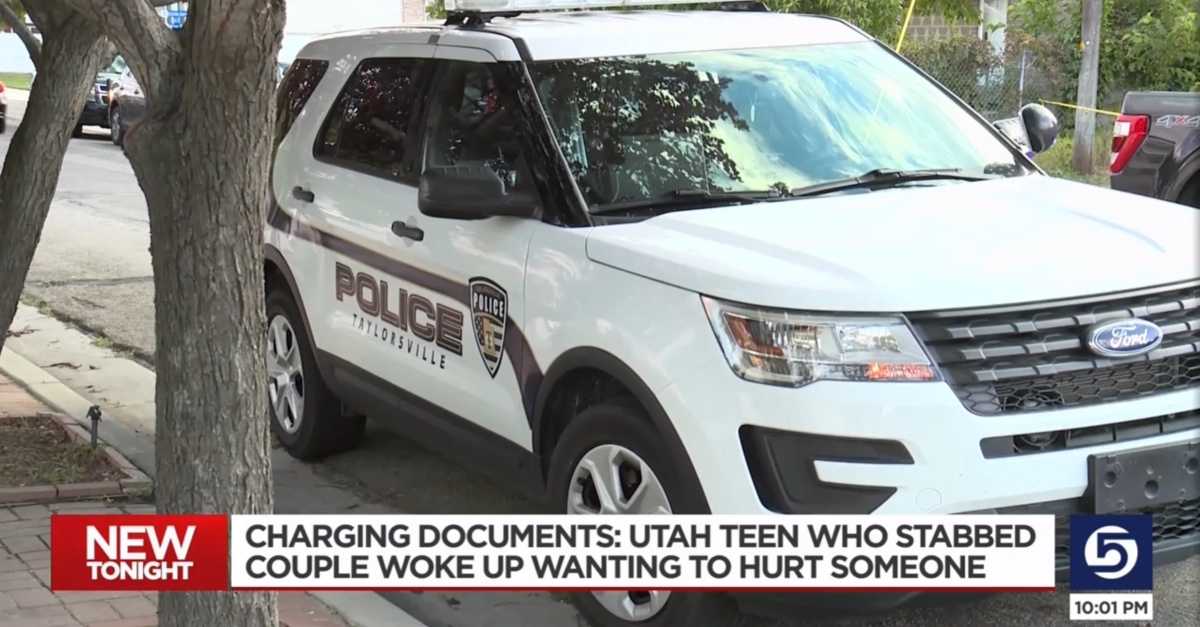 Armed with two knives, a teenage boy wandered a Utah city in the early morning because he wanted to “hurt someone,” according to police.

Officers described the teen’s stated motive in charging documents obtained by KSL. He allegedly told cops he woke up between 1 a.m. and 2 a.m. at his home on Sept. 20 before leaving home and turning people’s doors to see if the residences were open.

“He went to the kitchen shaking, shivering and freaking out,” police reportedly said. “He stated he got ready like he was going to school, and he grabbed his father’s pocketknife and a large kitchen knife. [He] then said he left his home and began wandering and walking around trying to open people’s doors with the intent to hurt someone.”

The boy allegedly ran and hid the kitchen knife after at least one person confronted him, but he eventually found an unlocked door at about 3:30 a.m. It was the home of Ashley and J.J. Dasher. He took a $20 bill and car keys from the bathroom. He entered their bedroom as the couple was sleeping.

What happened next left the Dashers with grievous wounds, they said.

“I kind of half opened my eyes,” J.J. told KSTU in a Sept. 22 report. “And there was a figure just standing right over our bed.”

Dasher said he attacked, but the boy stabbed him 12 times, resulting in a collapsed lung.

“I immediately just flew out of bed, screaming and started punching him, but at the same time, he’s stabbing me,” he said. He said he was stabbed 12 times and had a collapsed lung.

J.J. said he screamed at Ashley to run, but the boy continued to chase her.

But officers reportedly said the 15-year-old finally ran away when a woman in the neighbors’ home yelled, “Leave her alone.”

“[Ashley Dasher] came screaming, and that’s what woke us up,” neighbor Chad Hathaway told KSTU. “So we jumped out of bed, immediately called 911.”

“If they weren’t there, things would be so different,” Ashley said, crediting her neighbors. “But, really thankful for them.”

According to cops, the boy said he hid in a window well.

“He eventually heard the police and K-9s and took off running again,” police said. “[He] stated that when he saw police again, he realized what he did was wrong and needed to turn himself in.”

The 15-year-old was allegedly a complete stranger to the Dashers.

Ashley sustained 24 stab wounds, resulting in injuries such as two collapsed lungs, police said. The Dashers’ son, who is nonverbal autistic, slept through the attack, J.J. said. The child was unharmed.

“I don’t think I’m mad at him,” J.J. reportedly said. “It must be an unfortunate situation. I don’t know if it’s mental health issues, abusive household, I don’t know.”

FOX 13 EXCLUSIVE: JJ and Ashley Dasher spent days in the hospital recovering after a teen they don’t know stabbed them in their home. @fox13 https://t.co/QwEDzwXUuP

“Right now we’re picking up the pieces, trying to get our lives back on track,” the couple said in a statement to KSTU. “It will be a long road, but we’re optimistic.”

Charges against the teenager are two counts of attempted aggravated murder as well as aggravated burglary, aggravated robbery, and possession of a weapon by a minor.