White House Reportedly Sees Clarence Thomas as Most Likely to Retire This Year; McConnell Has a ‘Favorite’ Lined Up 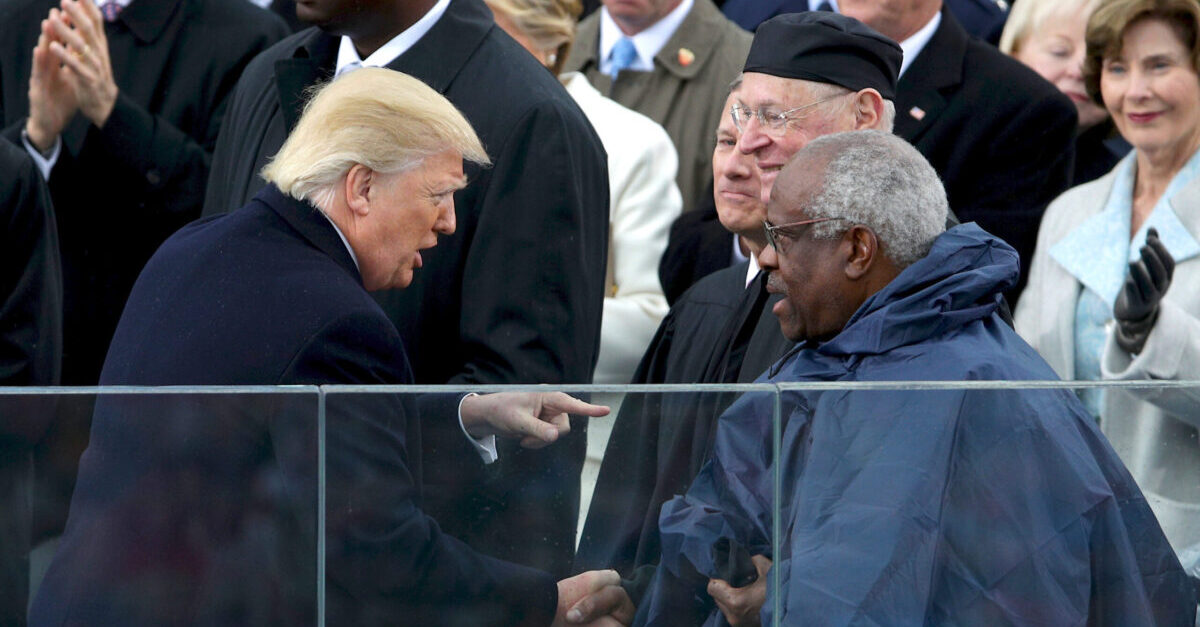 The administration of President Donald Trump and Senate Republicans are privately poised for the “possibility” U.S. Supreme Court Justice Clarence Thomas may retire “in the coming months,” the Washington Post reported. Though Thomas has said nothing of retiring, such a possibility would provide “a tantalizing prospect for Republicans who value the court above all other issues and are eager to have Trump have one more opportunity to nominate a justice before the election,” the Post said.

The information was sourced back to “a White House official and two outside Trump political advisers” who spoke anonymously. It’s unclear why Thomas is viewed as most likely to retire, considering that as recently as 2019 Thomas straightforwardly said “I’m not retiring.” A friend of Justice Thomas’s even said, “He will die on the court.” But Thomas, at 72, is the senior-most Republican-appointed justice on the court (Samuel Alito is 70, and other rumors say he is the one who would retire); Republicans currently control the White House and the Senate. The November elections loom large in the background.

A “favorite”pick to replace Thomas is Sixth Circuit Court of Appeals Judge Amul R. Thapar, 51. Senate Majority Leader Mitch McConnell (R-Ky.) favors Thapar “as a prime candidate,” the Post reported. Other conservatives support Seventh Circuit Court Judge Amy Coney Barrett, 48. Several of those who spoke anonymously to the Post said Coney Barrett would be a more likely pick were Justice Ruth Bader Ginsburg, 87, to retire. In 2019, Ginsburg also said that, despite health scares, she has no plans to retire.

McConnell said during a May event that he would push a last-minute Trump nominee through the confirmation process and onto the court despite the upcoming election. That promise came in stark contrast to McConnell’s refusal to do the same for Obama nominee Merrick Garland in the lead up to the 2016 election.  Garland was nominated March 16, 2016, and any hypothetical Supreme Court vacancy would occur substantially past that date in the 2020 election cycle.

The observations about the purported inner workings of Republican thought processes concerning Supreme Court succession came as part of a broader piece by the Post which examined conservative anger over recent votes which championed socially liberal causes by justices put on the court by Republican presidents. The primary target of this ire was Chief Justice John Roberts, who sided with the court’s liberals in an abortion case; however, Justice Neil Gorsuch, who voted that the civil rights act applies to sexual orientation and gender identity, has also been the target of some scorn.

Compare those views of Roberts and Gorsuch to the directly expressed views of Thomas, whose retirement would give Trump a clear chance to replace a conservative with another conservative. In this week’s abortion ruling, Thomas clearly said that states should be able to make abortion illegal, and he criticized Roberts for not agreeing with him:

The plurality and THE CHIEF JUSTICE ultimately cast aside this jurisdictional barrier to conclude that Louisiana’s law is unconstitutional under our precedents. But those decisions created the right to abortion out of whole cloth, without a shred of support from the Constitution’s text. Our abortion precedents are grievously wrong and should be overruled.

The jurisdictional barrier of which Thomas complained was that abortion providers, not abortion seekers, filed suit to argue against a Louisiana law which required abortion doctors to obtain admitting privileges to a hospital within 30 miles of his or her abortion clinic.

Thomas further said notions of a constitutional “right to privacy” were “legal fiction” which “should be undone” (internal citations omitted):

But today’s decision is wrong for a far simpler reason: The Constitution does not constrain the States’ ability to regulate or even prohibit abortion. This Court created the right to abortion based on an amorphous, unwritten right to privacy, which it grounded in the “legal fiction” of substantive due process. As the origins of this jurisprudence readily demonstrate, the putative right to abortion is a creation that should be undone.

Roe is grievously wrong for many reasons, but the most fundamental is that its core holding—that the Constitution protects a woman’s right to abort her unborn child—finds no support in the text of the Fourteenth Amendment. Roe suggests that the Due Process Clause’s reference to “liberty” could provide a textual basis for its novel privacy right. Ibid. But that Clause does not guarantee liberty qua liberty. Rather, it expressly contemplates the deprivation of liberty and requires only that such deprivations occur through “due process of law.”

That is the sort of language Republicans and Conservatives want to hear more of.