The justices on the U.S. Supreme Court have received their circuit assignments. The most notable of these, perhaps, is that the newest Justice Amy Coney Barrett will handle applications submitted in the Seventh Circuit, where she was a circuit judge for three years.

Here’s what the Supreme Court’s Friday order said on the assignment front:

The federal court system is made up of district courts, appellate courts, and the U.S. Supreme Court. After a case has made its way through one of the nation’s 94 trial courts, a party may appeal to the circuit court in their jurisdiction. The image below helpfully outlines what the circuit boundaries are and identifies them by circuit number. 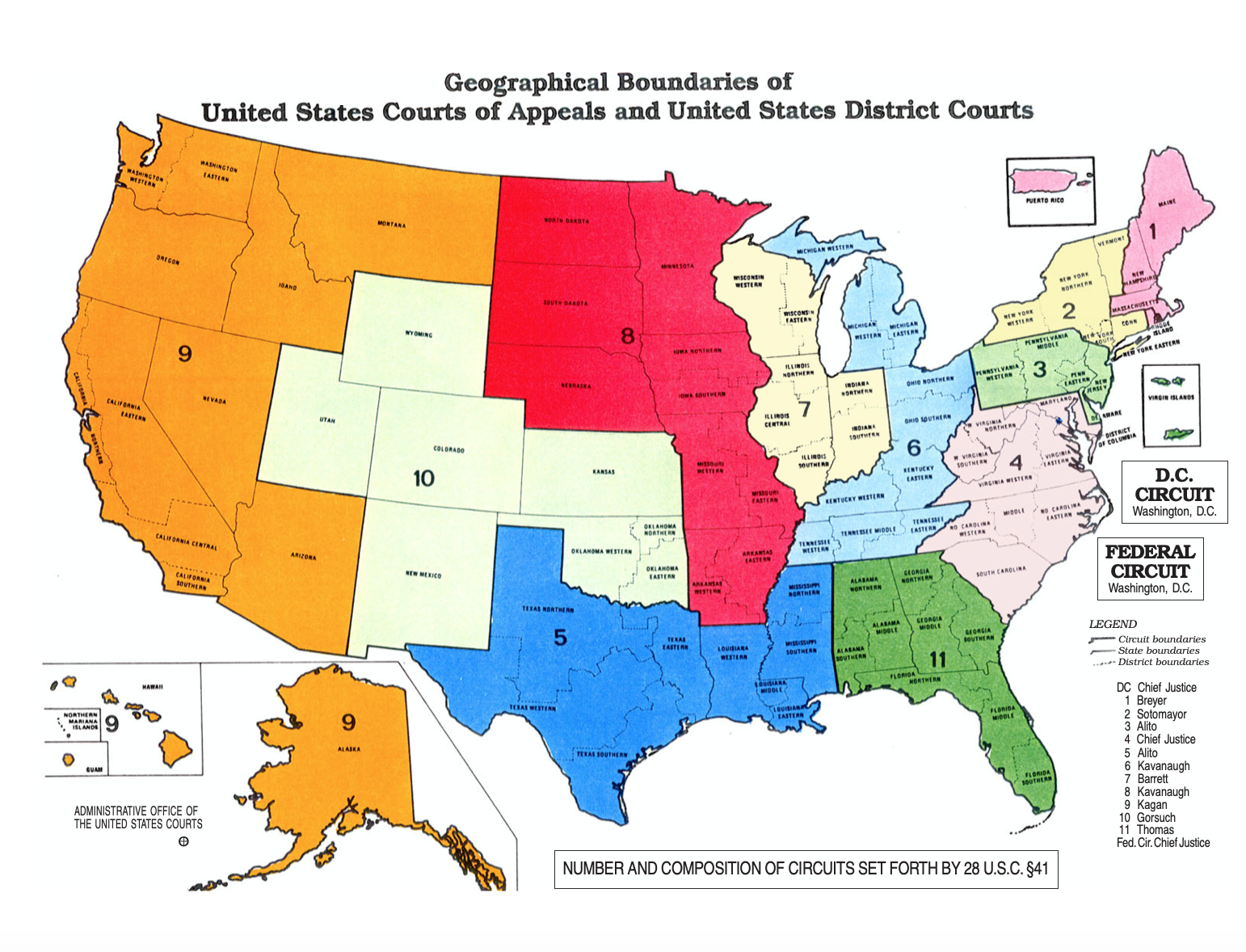 As you can see from the list above, there are 13 federal circuits.

The First through Eleventh Circuit courts are self-explanatory. The District of Columbia Circuit, given its location, handles some of the most high-profile and controversial political appeals in the country. The Federal Circuit, as the court’s website notes, is unique in its nationwide jurisdiction and the kinds of claims it handles:

The Federal Circuit is unique among the thirteen Circuit Courts of Appeals. It has nationwide jurisdiction in a variety of subject areas, including international trade, government contracts, patents, trademarks, certain money claims against the United States government, federal personnel, veterans’ benefits, and public safety officers’ benefits claims. Appeals to the court come from all federal district courts, the United States Court of Federal Claims, the United States Court of International Trade, and the United States Court of Appeals for Veterans Claims. The court also reviews certain administrative agency decisions, including those from the U.S. Trademark Trial and Appeal Board, the U.S. Patent Trial and Appeal Board, the Boards of Contract Appeals, the U.S. Merit Systems Protection Board, the Congressional Office of Compliance, the Government Accountability Office Personnel Appeals Board, and the U.S. International Trade Commission.

The Supreme Court helpfully explains, at length, why the justices’ circuit assignments matter. Petitioners will submit emergency applications to an individual justice. A recent example? Pennsylvania Republicans (in the Third Circuit) submitted an emergency application with Justice Samuel Alito, asking for an injunction in an election-related case. Alito responded by granting the request himself and referring the application to the rest of the Supreme Court.

You may have noticed as well that petitions for a writ of certiorari (a petition for SCOTUS to hear a case) note which circuit the petition is coming from: On Petition for a Writ of Certiorari to the United States Court of Appeals for the _____ Circuit.