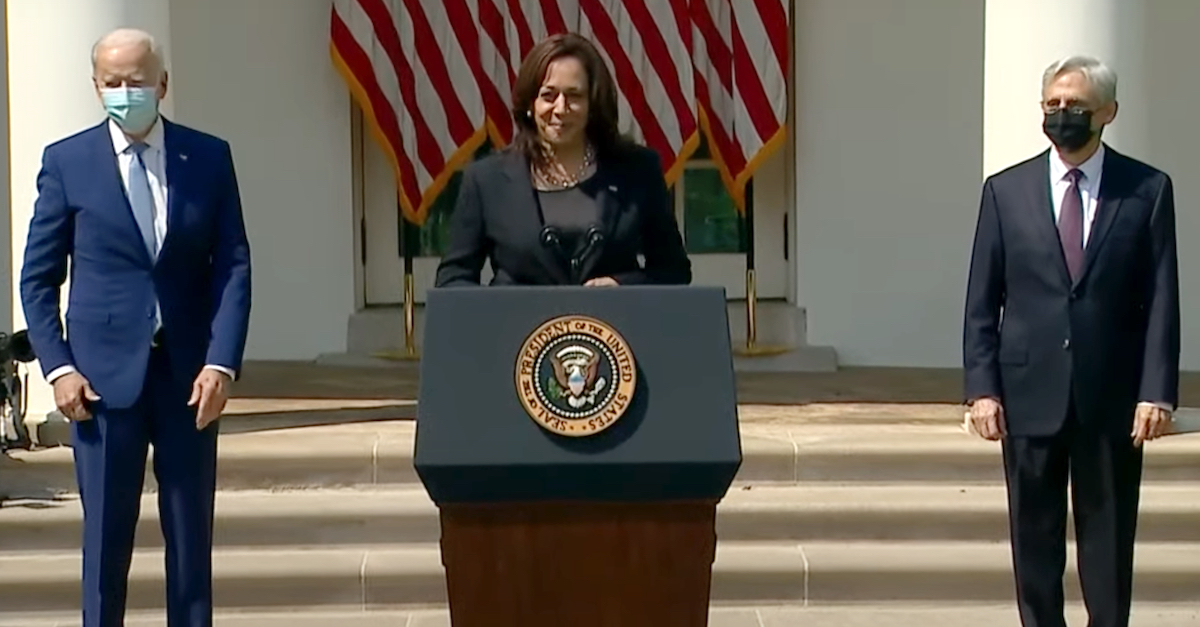 President Joe Biden, Vice President Kamala Harris, and Attorney General Merrick Garland on Thursday announced sweeping actions aimed to implement gun control reforms. The specifics of the six-pronged plan are outlined in a White House statement. Among the actions are the following:

(1) The Department of Justice will issue a proposed rule to regulate “ghost guns” within 30 days.
(2) The DOJ will issue a proposed rule to regulate “stabilizing braces” within 60 days.
(3) The DOJ will publish model “red flag” legislation for states to consider adopting, and Biden will ask Congress to pass a national “red flag” law.
(4) Investments in “evidence-based community violence interventions” aimed at “reducing gun violence in urban communities through tools other than incarceration.”
(5) The DOJ “will issue an annual report on firearms trafficking.”
(6) Biden nominated David Chipman to serve as Director of the Bureau of Alcohol, Tobacco, and Firearms (ATF).

The announcement was plagued by miscues and other factual and legal maladies.

Biden twice referred to the ATF as the “AFT” during Thursday’s press conference. Here’s the official White House transcript:

Finally, the Bureau of Alcobol [sic] — Alcohol, Tobacco, and Firearms, the key agency enforcing gun laws, hasn’t had a permanent director since 2015.

Today, I’m proud to nominate David Chipman to serve as the Director of the AFT.  David knows the AFT well.  He served there for 25 years.  And Vice President Harris and I believe he’s the right person, at this moment, for this important agency.

The “AFT” is the American Federation of Teachers. The National Rifle Association, while its executive vice president and CEO was testifying in a bankruptcy case, didn’t let that mistake slip:

Biden elsewhere called gun violence a “public health crisis” and attempted to argue that his administration’s moves were entirely constitutional.

“Nothing — nothing I am about to recommend in any way impinges on the Second Amendment.  They’re ‘phony arguments’ suggesting that these are Second Amendment rights at stake from what we’re talking about,” Biden said. “But no Amendment — no amendment to the Constitution is absolute. You can’t yell crowd — you can’t yell ‘fire’ in a crowded movie theater and you call it freedom of speech. From the very beginning, you couldn’t own any weapon you wanted to own; in the very beginning when the second existed certain people weren’t allowed to have weapons, so the idea is just bizarre to suggest that some of the things we’re recommending are contrary to the Constitution.”

Later, Biden said “everything that is being proposed today is totally consistent with the Second Amendment.” Law&Crime columnist Elura Nanos penned a virtually identical comparison between the First Amendment and the Second Amendment back in 2016, as the Supreme Court had done the same in 2008.

Let’s pause for a moment to examine the president’s First Amendment analogy. Biden said, in essence, that the Constitution doesn’t protect the right to “yell ‘fire’ in a crowded movie theater.” He’s wrong. People can constitutionally yell “fire” in crowded gatherings — if there is an actual fire. The often-misquoted phrase usually fails to acknowledge that key distinction.

The original 1919 quote from Supreme Court Justice Oliver Wendell Holmes, Jr. goes like this: “The most stringent protection of free speech would not protect a man in falsely shouting fire in a theatre and causing a panic” (emphases ours). Biden didn’t articulate the “falsely” or the “causing a panic” aspects of the quote, which are critical to its meaning.

Holmes made the analogy in Schenck v. U.S., a case which held that an individual could not hide behind the First Amendment to evade punishment under the Espionage Act for leafletting against mandatory military conscription in times of war. Schenck was mostly overturned by Brandenburg v. Ohio in 1969, but the quote stuck.

The quote itself is possibly a reference to the Italian Hall Disaster in Calumet, Mich., in 1913. A packed house of as many as 600 Upper Peninsula copper miners and their families were gathered on Christmas Eve to celebrate the holiday in the midst of a long and bitter labor strike. Someone yelled “fire!” A stampede down a stair well resulted in an astonishing 73 deaths. A total of 59 children and many women were among the victims. The youngest who died was just two years old. Some evidence suggested that an anti-union agitator or possibly an anti-union member of mine management infiltrated the gathering and sounded the false alarm; however, no one was ever prosecuted or charged. To this day, local residents gather on Christmas Eve in a stone arch which once framed the doorway where the deaths occurred — the rest of the building is gone — to remember those who died during a strike which sought eight-hour work days and three-dollar-per-day salaries (about $80 per day in 2021 dollars).

The incident was embellished when it was re-told in a Woody Gutherie song, but the historical framework is helpful when considering the meaning of the quote.

A similar stampede happened in 1902 at Shiloh Baptist Church in Birmingham, Ala., where 115 people died. Another which appeared to result in no fatalities occurred in Harlem in 1884. The Harlem incident resulted in the incarceration of an alleged guilty party for one month, The New York Times reported at the time.

Let’s be clear as we’re watching this Biden circus.

Biden is dismantling the 2nd Amendment.

It’s time to STAND and FIGHT!

He also complained about federal laws which made gun manufacturers “the only industry in America” exempt from many liability claims. “This is the only outfit that is exempt from being sued,” Biden said.

That is also legally incorrect. For instance, Section 230 of the Communications Decency Act immunizes tech companies from defamation lawsuits — much to the irritation of many conservatives, including Sen. Josh Hawley (R-Mo.).

Biden also referenced the killings of a physician and four others in South Carolina late Wednesday afternoon. He said that on average, 316 people are shot every day in America and that “106 of them die.”

“I know it’s painful and frustrating that we haven’t made the progress that we’d hoped for,” the president said. “But it took five years to get the Brady bill passed, and it took even more years to work to pass the assault weapons ban. And it saved lives.”

We held in New York that Congress cannot compel the States to enact or enforce a federal regulatory program. Today we hold that Congress cannot circumvent that prohibition by conscripting the States’ officers directly. The Federal Government may neither issue directives requiring the States to address particular problems, nor command the States’ officers, or those of their political subdivisions, to administer or enforce a federal regulatory program.

The court in Printz did reject the NRA’s request to invalidate the entire Brady Bill, so Biden is correct inasmuch that the core of the law ultimately did remain intact.

The ten-year Assault Weapons Ban signed into law by then-President Bill Clinton, which Biden also referenced, expired on its own terms in 2004.  Though various lawsuits challenged the ban, none succeeded.

It should come as no surprise that any future gun control laws would likely be met with litigation similar to that of the past bills whose legal history Biden did not reference.  Still, Biden can take some solace in the following language from D.C. v. Heller (2008) (citations omitted):

Like most rights, the right secured by the Second Amendment is not unlimited. From Blackstone through the 19th-century cases, commentators and courts routinely explained that the right was not a right to keep and carry any weapon whatsoever in any manner whatsoever and for whatever purpose. For example, the majority of the 19th-century courts to consider the question held that prohibitions on carrying concealed weapons were lawful under the Second Amendment or state analogues. Although we do not undertake an exhaustive historical analysis today of the full scope of the Second Amendment, nothing in our opinion should be taken to cast doubt on longstanding prohibitions on the possession of firearms by felons and the mentally ill, or laws forbidding the carrying of firearms in sensitive places such as schools and government buildings, or laws imposing conditions and qualifications on the commercial sale of arms.

“No matter how long it takes, we’re going to get these passed. We’re not going to give up. We have an obligation to fulfill the first responsibility of government: to keep our people safe,” Biden added, echoing the verbiage of President George W. Bush during his administration’s fight against terrorism. “And in the process we can show the world and show ourselves that democracy works. We can come together and get big things done.”

Garland said guns had taken 11,000 lives so far this year.

“Gun deaths in our country are occurring at a staggering pace,” the appellate-judge-turned-attorney-general said.  “I am under no illusions about how hard it is to solve the problem of gun violence, and I know that the Department of Justice alone cannot solve the problem.  It is a problem that we must all work on together in the collective effort to keep guns out of the hands of criminals and save lives.”

“But there is work for the Department to do,” he then said.  “And we intend to do it.”

Garland outlined a multi-point plan for the DOJ. First, he has directed an “updated,” “data-driven” study of criminal gun trafficking networks. Second, he agreed that a regulatory loophole for so-called “ghost guns” needed to be closed. Third, he said regulations would be updated to make it clear that statutory restrictions would apply to short-barreled weapons which were marketed with stabilizing braces. Fourth, he said the DOJ would model “red flag” legislation for states (19 states have already passed such legislation). Fifth, he said he would empower communities to “combat and prevent gun violence” through more than a dozen grant programs backed by $1 billion in funding.

Democrats followed with high praise for the president.

Pelosi pointed to bills already passed by the House which Biden said need to next be passed by the Senate — now under the control of the Democrats.

“As we take these steps, the House is proud of our passage on March 10 of H.R. 8 and H.R. 1446, bipartisan and commonsense background checks legislation supported by over 90 percent of the American people, including gun owners,” Pelosi continued. “Working with the Biden Administration and the survivors and families of victims who have turned the agony into action, we must ensure that these bills are passed by the Senate and signed into law, so that we can advance safety, security and justice in America.”

“When it comes to the sickening gun violence in our streets we have a choice: give up or stand up,” said U.S. Senate Majority Whip Dick Durbin (D-Ill.). “President Biden is prepared to lead with common sense, Constitutional steps to stop this uniquely American gun madness. It’s time for Congress to stop making excuses and start making our nation safer.”

[Editor’s note:  this piece has been updated to contain additional case law.]