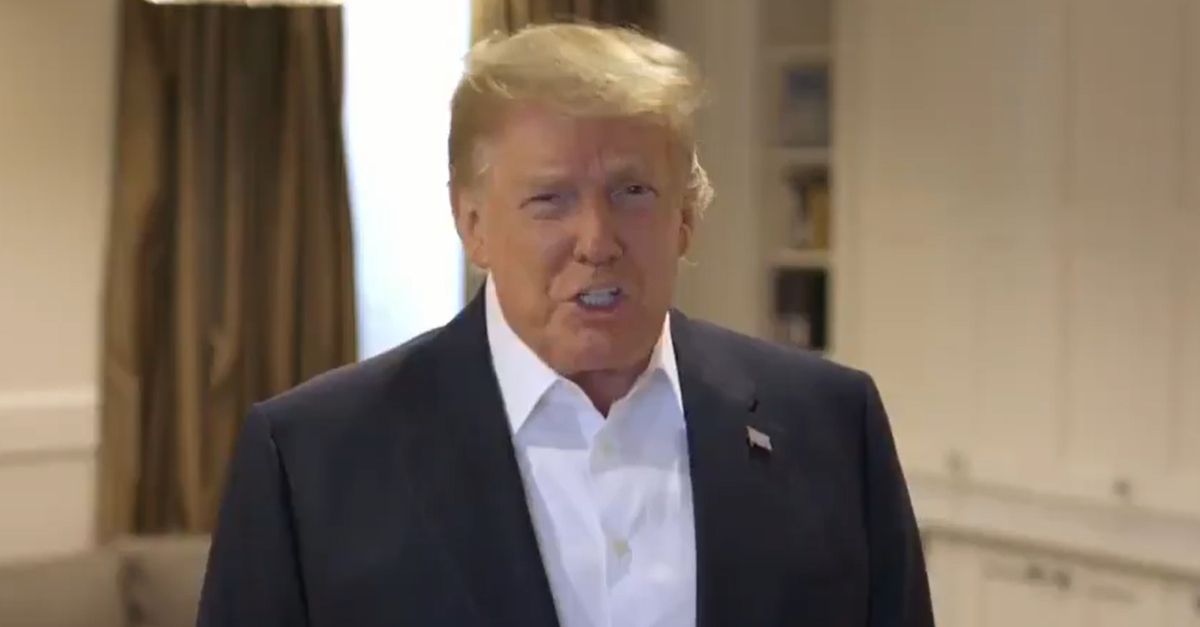 Fresh from the COVID-recovery room, President Donald Trump on Tuesday unleashed a signature all-caps demand via Twitter that we “REPEAL SECTION 230!”

The president’s interest in cyberlaw appears to have been informed by his recent run-in with Twitter, after he posted that COVID-19, in most populations, is “far less lethal!!!” than the flu.

Flu season is coming up! Many people every year, sometimes over 100,000, and despite the Vaccine, die from the Flu. Are we going to close down our Country? No, we have learned to live with it, just like we are learning to live with Covid, in most populations far less lethal!!!

Trump’s demand also comes on the heels of Twitter’s having temporarily locked the president’s account after he violated their rules by sharing the email address of a New York Post reporter. Although the president had been tweeting to thank the reporter for her for positive coverage, his tweet violated Twitter’s rule against the unauthorized sharing of private information.

Trump likely considered his next command–that we repeal Section 230–a targeted counterpunch aimed directly at the very social media platforms that challenged him. The irony, though, is that Section 230 is precisely the statute that the president has to thank for the very existence of his social media account of choice.

A quick reminder on Section 230. It’s the section of the Communications Decency Act of 1996 that protects internet companies who are acting as intermediaries from legal liability for what users post on their platforms. Under the current version of Section 230, internet companies are platforms, not publishers. “Publishers,” by contrast, are those entities that can be legally liable for defamation.

Section 230 is why a restaurateur wouldn’t sue Yelp for a defamatory review left by an individual. It’s also what keeps platforms like Facebook and Twitter alive. After all, without legal protection, social media platforms themselves might be responsible for any user-created content that violates the law. Such unlimited possibilities for liability would make social media untenable.

Section 230 in federal law protects your right to free speech on the internet. It’s what allows you to criticize @realDonaldTrump or me or the Cleveland @Browns without fear that the post will be taken down.

For example: @POTUS is a jerk for suing to rip your healthcare away. https://t.co/xgx75WzyY0

Without 230, it’s unlikely that Trump would have access to the vehicle he uses so often to insult (and potentially defame) others.

The irony was not lost on observers.

Trump is mad and screaming “REPEAL SECTION 230!!!” because he’s angry at Twitter for responsibly hiding his tweet basically saying the coronavirus is no big deal and just like the flu. It violated Twitter’s rules.

Even the President of the United States is not above the rules.

This campaign is much more idiotic than his first campaign. https://t.co/VohZO0ltfu

In yet another all-caps tweet, Trump demands repeal of Section 230 of the Communications Decency Act, which says social sites can’t be held liable for the speech of their users. If Twitter were on the hook for the lies of its users, Trump would be among the first to get the boot.

Section 230 is also what allows internet companies to create their own terms of service. They can decide to “restrict access” to any content they deem inappropriate. It is a specific, statutory statement about what we likely would have known anyway – that Twitter and Facebook are private companies, not government entities; on that basis, you are not owed “freedom of speech” from social media platforms.

Last month, the Department of Justice sent draft legislation to Congress asking lawmakers to reform Section 230 by weakening protections for social media companies, and holding them accountable for the way they moderate user-provided content.

In an op-ed written in June by Oregon Democratic Senator Ron Wyden—a co-author of Section 230. Wyden said Section 230 was a critical factor in online platforms allowing the sharing of things like the #MeToo movement, and the footage of the killing of George Floyd.

“Let’s not kid ourselves,” wrote Wyden, “Trump’s attempt to abolish Section 230 is essentially a way of bullying social media companies so that he may post what he wants without any challenge.”

A quick reminder that tweeting “REPEAL SECTION 230” is the internet equivalent of shouting “DISSOLVE MY BONES.”