State Lawmakers’ Efforts to Keep Jan. 6 Insurrectionists Out of Office Are Just Getting Started 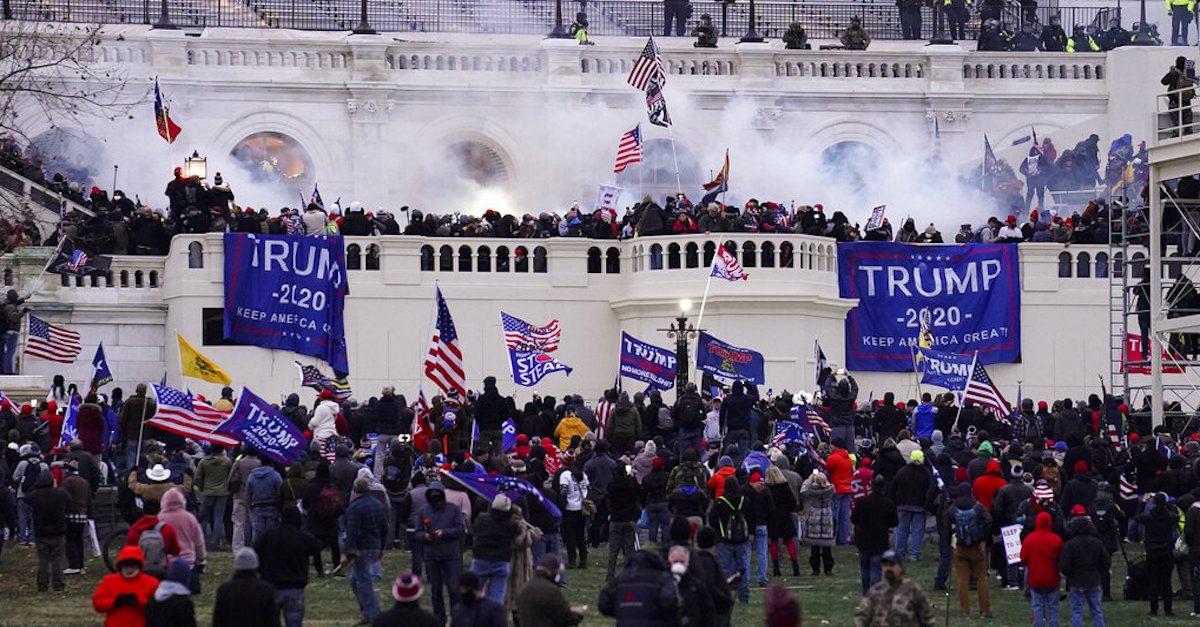 FILE – Violent insurrectionists loyal to President Donald Trump storm the Capitol, Jan. 6, 2021, in Washington. Over months, the House Select Committee investigating the Jan. 6 U.S. Capitol insurrection has issued more than 100 subpoenas, done more than 1,000 interviews and probed more than 100,000 documents to get to the bottom of the attack that day in 2021 by supporters of former President Donald Trump. (AP Photo/John Minchillo, File)

Lawmakers in at least three states have introduced legislation to limit the extent to which people convicted of participating in an insurrection can hold office and hold other positions of public trust, but the proposals — which target convictions from misdemeanors to felonies — have a long way to go before becoming law.

Proposed laws in New York, Connecticut, and Virginia provide varying degrees of limitations on public service roles people convicted of insurrection or insurrection-adjacent activity can hold in the state. It’s not at all clear, however, that the state laws would affect any one of the nearly 1,000 people who have been charged in the Jan. 6 Capitol riot, when scores of Donald Trump supporters overwhelmed police to violently breach the Capitol building as Congress was certifying Joe Biden‘s 2020 electoral win. The mob forced Congress to halt certification as lawmakers and Capitol staff either fled the building or sheltered in place for hours.

New York state Sen. Brad Hoylman-Sigal (D), for example, has introduced the Restrict Insurrectionists from Office Taking (RIOT) Act, which prohibits “a person convicted of rebellion or insurrection against the authority of the United States or the laws thereof under 18 U.S.C. Section 2383” from holding civil office in the state.

A representative from Hoylman-Sigal’s office confirmed to Law&Crime that the law would apply only to people convicted of “sedition or insurrection.” This would mean that Daniel Christmann — a self-proclaimed member of the right-wing Three Percenter militia group and failed state senate candidate — would still be able to hold state office despite his misdemeanor conviction for breaching the Capitol on Jan. 6 and allegedly boasting about it on social media.

Former NYPD cop Thomas Webster, who was seen trying to rip a gas mask off a police officer at the Capitol that day and received the longest prison sentence yet among Jan. 6 defendants, would similarly be able to hold office under the proposed New York law.

To date, the charge of sedition or insurrection, which is punishable by up to 10 years in prison, has not been brought against any alleged Jan. 6 participant.

The closest the federal government has come to linking Jan. 6 participants to an attempt to overthrow the federal government is the charge of seditious conspiracy, which carries a potential 20-year prison sentence. Six people have been convicted of that charge: Oath Keepers founder Stewart Rhodes and Florida leader Kelly Meggs were convicted in November by a jury, and four additional co-defendants were convicted Monday.

Four people have also pleaded guilty to the charge, and the seditious conspiracy trial of Proud Boys leader Enrique Tarrio and four co-defendants is currently underway.

A seditious conspiracy conviction may be enough to block someone from holding office in Connecticut, where state Sen. Majority Leader Bob Duff (D) has introduced a bill that would permanently prohibit “any person convicted of sedition, insurrection, rebellion or a felony in relation to any such act” from serving as an elector and from running for or holding public office, as well as being employed by the state “or any political subdivision thereof.”

With the “felony in relation to any such act” language, this appears to be a broader prohibition than the New York proposed law. However, it wouldn’t likely apply to Jean Lavin and Carla Krzywicki, the mother-daughter pair from Connecticut who climbed a bike rack that was being used as a barrier to reach the terrace of the Capitol building and pleaded guilty last year to one misdemeanor count each.

Duff told Law&Crime that the law as proposed “is not ready for prime time,” but that the legislative session ends in June and lawmakers “have plenty of time to amend [the law] as we hear what we should or shouldn’t do.”

Duff added that he does not anticipate misdemeanors being included in the law, even as people facing lower-level Jan. 6 charges have run for office in other states.

“I get that there may be folks considering running for office, but the voters have a responsibility to look at some of those candidates and make decisions,” Duff said. “I want to make sure that the most violent and those charged with the most serious crimes from Jan. 6 don’t have a chance to run for office, nor would they have a chance to be state or local employees in the government.”

In Virginia, Democrats Dan Helmer and Candi Mundon King introduced an amendment to an existing law that makes it a felony to participate in an insurrection.

“Any person convicted of an offense pursuant to [the existing statute] or any substantially similar offense under the laws of another state or territory of the United States, the District of Columbia, or the United States shall be barred from serving in any position of public trust within the Commonwealth,” the proposed amendment says. Included in the definition of “position of public trust” are positions “with policy making or major program responsibilities or fiduciary monetary responsibilities, educational positions, law-enforcement positions, and public safety or public health positions.”

This is arguably the broadest of the three proposed laws, as it would prevent anyone from outside Virginia convicted of participating in an insurrection “or any substantially similar offense” from serving in a fairly broad range of public service roles in the state. It’s unclear whether this would apply to Virginians like Thomas Caldwell, convicted in federal court of obstruction of an official proceeding of Congress and other Jan. 6-related crimes, or Jacob Fracker and Thomas Robertson, former Virginia cops convicted of Jan. 6-related offenses.

“We really need to get the language right to target the insurrection itself,” Helmer told Law&Crime. “The goal is a tailored bill that covers those involved and convicted of criminal activity related to an uprising against the United States of America, of which they has only been one recently.”

Like Duff, Helmer said that he expects the language of the bill to shift as the legislative process proceeds. He is aiming for a “broad but fair” law that wouldn’t “catch up people who were involved in misdemeanors that could apply in other situations.”

“The bottom line is if you’re involved in an insurrection and uprising that sought to overturn an election, you shouldn’t be a cop or a teacher or in the National Guard,” Helmer, an 11-year Army veteran and active serving member of the Army Reserves, told Law&Crime.

As vastly different as the proposed laws may be, proponents are pleased to see multiple offerings on the table.

“As somebody who’s been writing about this for two years and taken an active interest, I’m glad that other legislatures in other states have taken this issue on too,” Duff told Law&Crime.

Helmer said that the purpose of the laws isn’t necessarily to encompass all Jan. 6-related offenses.

“That’s not the goal,” the Virginia lawmaker said. “The bigger point is not about can we ‘capture’ every single insurrectionist in the definition, but rather in affirming positively — and ideally with bipartisan support, although I’m skeptical — that we as a country don’t tolerate violent activity to overthrow an election.”

“I really think that’s what it’s about,” Helmer added. “Stop the recasting of the narrative as not a big deal. It is a big deal.”