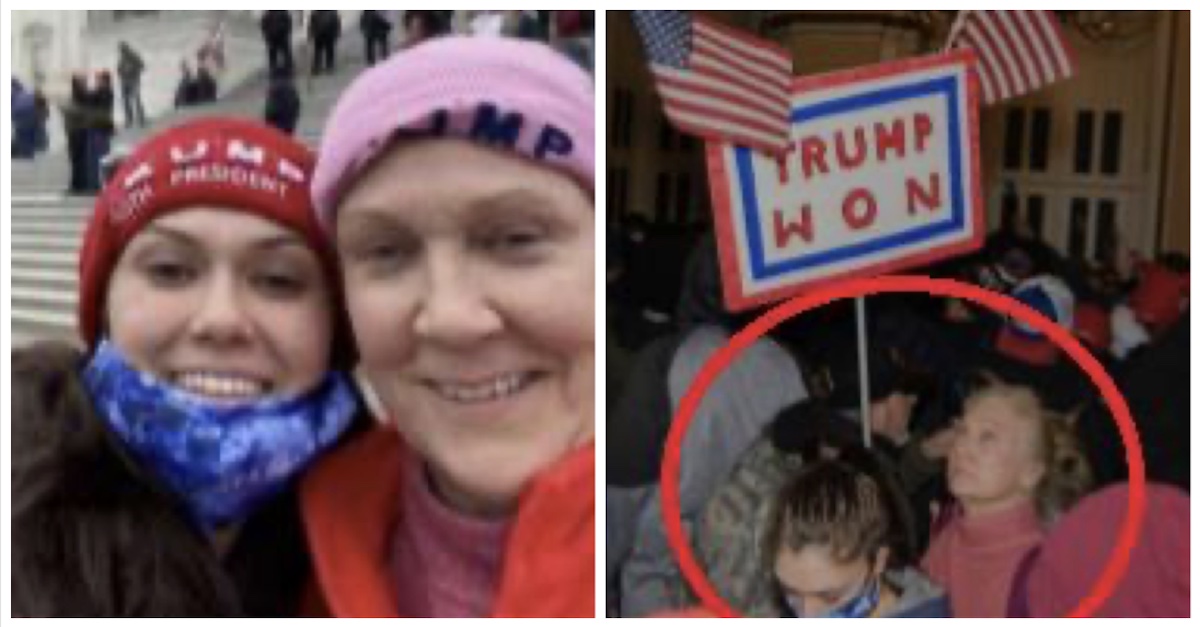 The mother-and-daughter duo who missed Donald Trump’s rally on Jan. 6 because their bus driver got lost but who nonetheless “followed the crowd” into the capitol building that day have both pleaded guilty to a misdemeanor.

Carla Krzywicki, 20, and her mother Jean Lavin, 56, pleaded guilty Tuesday to a single count of parading, demonstrating, or picketing inside a capitol building. The misdemeanor charge carries a potential jail sentence of six months.

The pair also faced disorderly and disruptive conduct charges and a charge of entering and remaining in a restricted building. Those charges were tossed because of the plea.

On Jan. 6, Lavin and Krzywicki took a bus from Connecticut headed for Washington. Lavin told federal investigators that the bus driver got lost in New York City and didn’t get them to Washington until after Donald Trump’s speech on the Ellipse had concluded.

Lavin told prosecutors that at that point, she and her daughter “followed the crowd of people towards the capitol building.” The mob of Trump supporters, who were encouraged by Trump to march to the capitol and “fight like hell”, ultimately overran police and broke in to the capitol in an attempt to stop Congress from certifying the results of Joe Biden‘s win in the 2020 presidential election.

Lavin and Krzywicki got into the capitol from one of the building’s terraces, which they reached by climbing a bike rack that the mob had turned into a ladder. Police had originally been using the bike rack as a barricade against the protestors. 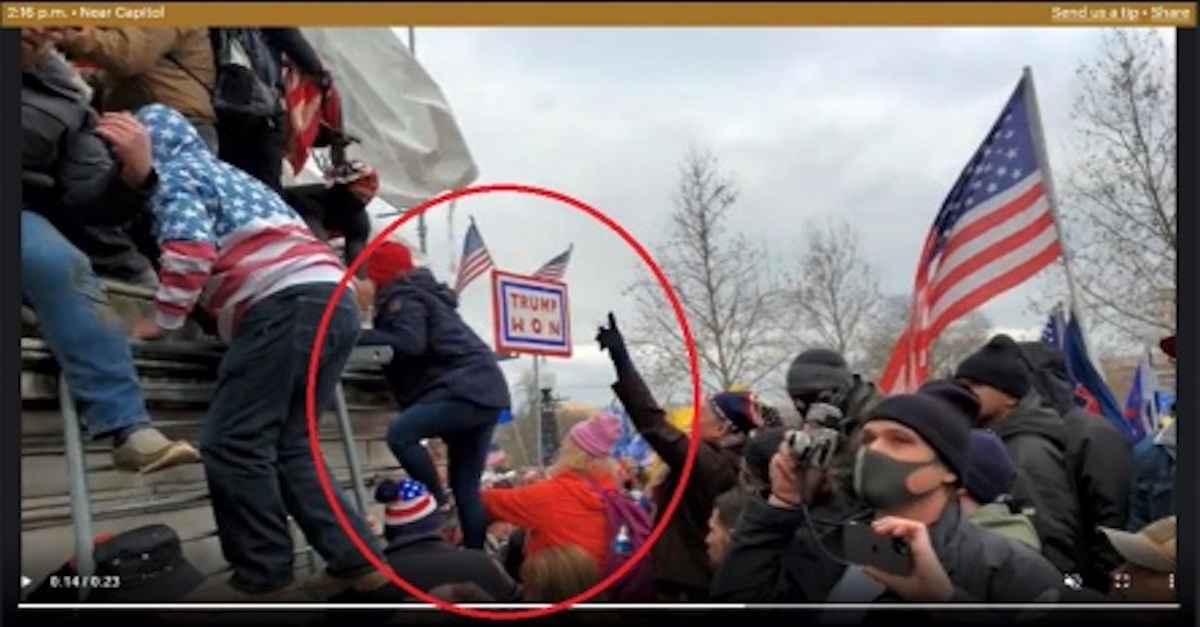 At the plea agreement hearing before Chief U.S. District Judge Beryl Howell on Tuesday, Lavin insisted that she and her daughter merely followed along with what others were doing.

“I went along with the crowd, yes, but I didn’t have the mob mentality that so many others did,” Lavin said. “We did enter, yes. We are guilty of entering and walking around but we didn’t participate in any pushing, shoving, [or] vandalizing.”

Lavin said of the bike rack-turned-ladder: “I just utilized it with many others.”

Lavin did acknowledge that she was part of the crowd that pushed through a line of police trying to block protesters from further entering the building but insisted that she was not violent.

Lavin also said that when she entered the building, it was not with the purpose of stopping Congress certifying the election results.

“Our purpose in traveling to Washington was to hear President Trump speak,” Lavin said. “We were dropped off after the speech had already ended and we went with the crowd.”

Photos and video show Lavin carrying a sign that said “Trump Won” on one side; the other side said as follows:  “Don’t allow 7 states of cheaters to hijack our election!”

Howell, a Barack Obama appointee, asked Lavin what she meant to say with that sign.

“At the time it meant that I did not believe the election was being calculated correctly,” Lavin said.

“The purpose of carrying the sign was I didn’t know what else to do with it,” she later elaborated. “I was responsible for it. I didn’t want it used to harm anyone else . . . we went with the crowd. We didn’t have any other purpose. It wasn’t a premeditated thing that we did.”

Lavin’s lawyer, Charles Willson, said that he plans on addressing Lavin’s habit of making signs and bringing them to political rallies in a future sentencing memo.

Despite Lavin’s apparent intention not to stop Congress from doing its job, the certification was in fact stopped for several hours, as lawmakers either evacuated or sheltered in place as protestors roamed the Capitol building.

Krzywicki was not as insistent as her mother that they merely got swept up in the crowd, although she did minimize her own accountability when she had the opportunity.

When Howell asked whether Krzywicki climbed the sideways bike rack to reach the Capitol building, Krzywicki said: “We did not place it there, but we did climb it.”

Krzywicki also said that while she “did not personally” push past police officers at the Capitol, she was part of the crowd that did.

“[T]his is history,” Krzywicki wrote.  “[W]e come for the government officials that are ruining our country . . . change needs to happen.” 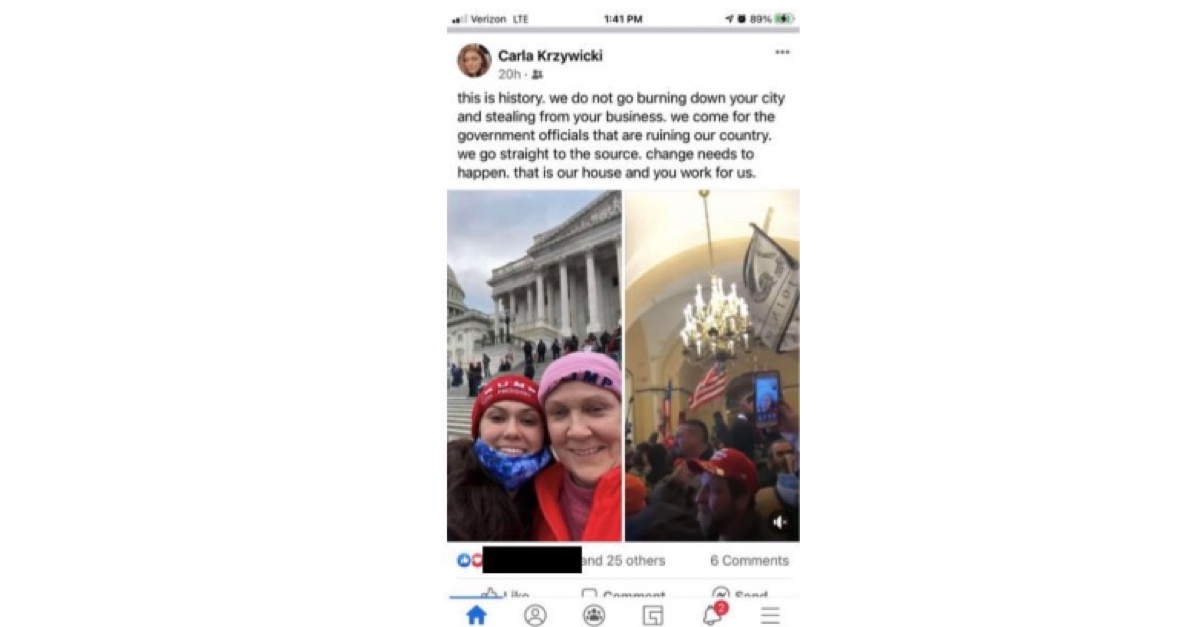 Howell asked Kryzwicki what she meant by the phrase “we come for the government officials that are ruining our country.”

“I meant by protesting,” Kryzwick said. “I did not mean violence or anything of that nature. It was a poor choice of words.”

“When you said ‘change needs to happen,’ what did you mean by that?” Howell asked.

“I meant violence in our country and ironically what happened that day,” Kryzwicki said.

Krzywicki said that she deleted the Facebook post in part because she was concerned about being identified and charged with criminal conduct.

Unlike her mother, Kryzwicki did admit that her purpose in entering the Capitol was to stop Congress from certifying the result of the 2020 presidential election.