Virginia Cop Fired After Breaching Capitol on Jan. 6 Gets Lighter Sentence for ‘Fulsome’ Cooperation with Feds, Testimony Against Former Mentor 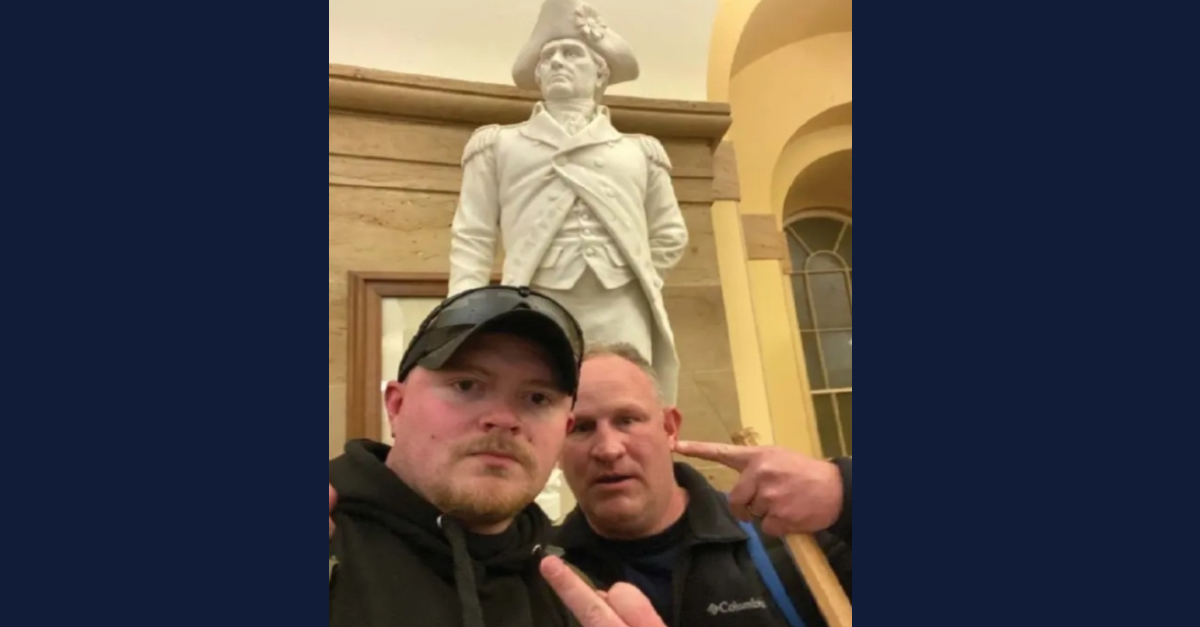 A former Virginia cop who breached the U.S. Capitol on Jan. 6 with a sergeant and mentor he saw as a “father figure” — and later testified against him at trial — was sentenced Tuesday to probation and home confinement.

Jacob Fracker could have faced up to five years behind bars for conspiring to obstruct, influence, and impede Congress, the felony offense to which he had pleaded guilty in March.

The government, however, had asked for a downward departure from federal sentencing guidelines, citing Fracker’s “fulsome” cooperation with the government in its prosecution of Thomas Robertson, Fracker’s former sergeant in the police department in Rocky Mount, Virginia.

The two men, at Robertson’s invitation and urging, had travelled to Washington together to see then-President Donald Trump’s so-called “Stop the Steal” rally, where Trump continued to falsely claim that Joe Biden’s win was the result of widespread voter fraud. Trump urged his supporters to march to the Capitol, where Congress was certifying the results of the Electoral College vote.

Robertson and Fracker, both wearing gas masks, did just that, and after entering the Capitol, took a selfie-style picture of themselves inside the building, making an obscene gesture to the camera.

After he was convicted by a jury in April of multiple charges, including felony obstruction, Robertson was sentenced last week to more than seven years in prison.

Prosecutors: Fracker Deserves a Lighter Sentence Because of “Fulsome” Cooperation

Prosecutors had requested six months of probation for Fracker, including a term of home detention or community confinement in a facility commonly known as a halfway house. U.S. District Judge Christopher Cooper ultimately went beyond that, imposing a 12-month probation sentence — including 59 days of home confinement — along with 120 hours of community service and $2,000 in restitution toward the estimated $2.7 million in damage to the Capitol.

The 59-day sentence would allow Fracker to keep his military disability benefits. Cooper, a Barack Obama appointee, said that he would have sentenced Fracker to community confinement, but there were no facilities close enough to where Fracker lives to make it feasible.

“The primary driver behind the sentence the government requests today is in fact Mr. Fracker’s cooperating with the government, which we agree is fulsome and above and beyond what we had even anticipated at the outset,” Aloi said.

Aloi acknowledged that while Fracker could reasonably be considered to have destroyed evidence by giving his cell phone to Robertson, who dumped his own phone along with Fracker’s into a lake, the government hadn’t even known about the destruction of the phone before Fracker told them.

“The court was wholly unaware of the destruction of the phone until Mr. Fracker told us about it,” Aloi told Cooper. “All the information flowed from when he debriefed [the FBI].”

“We’ve agreed not to use that information against him today,” Aloi added.

Fracker’s attorney Bernard Crane told Cooper that he had very little to add to Aloi’s allocution in support of the request for probation.

“Your Honor, one lesson I’ve learned in over 35 years of doing this sort of work, unfortunately it took longer than one would expect, is that when you and the government are on the same page — and the government has allocuted as you would have allocuted — shut up,” Crane said.

The defense attorney didn’t shut up completely, however, as he described his client’s military service, which included tours of duty in Afghanistan resulting in shrapnel injuries, years in the National Guard, and time as a police officer.

Crane said that the future Fracker had once envisioned for himself is now gone as a result of his actions on Jan. 6.

Crane said that Fracker had never been involved in politics and was not a part of radical groups, and that he “fell prey” to Robertson by accepting his invitation to go to Washington that day.

“Why Do You Think So Many of the Participants Seem to View Jan. 6 in Terms of Civil War and Fighting for Their Country?”

In an exchange with the defendant, Cooper sought to understand the mindset of Fracker and others like him who were moved to break the law on Jan. 6.

“I have a couple of questions for you,” the judge began. “Mr. Crane made the point that you weren’t terribly political. You obviously served in military, where you are supposed to do your job without regard for politics, and I’m sure that you did that. What is it, apart from Mr. Robinson, that led you and so many others who might fall into that category to breach the Capitol that day?”

“Obviously I can’t speak on their behalf,” Fracker said in response. “I would say that about 70 to 80 percent of my reasoning for going that day is because I wanted to know what the future held for my daughter. I just wanted to know what was going to happen, and if anybody was gonna have any insight [into] it, maybe it was the people speaking there that day.”

“The other 30 percent was I was asked to go by Mr. Robertson,” Fracker continued. “I loved him. I cared about him. I knew he wasn’t a spring chicken, so to speak, and having his back and him having my back is just second nature at this point in our relationship.”

“We obviously have a lot of these cases, and we see a lot of bravado, talking about going to war, doing battle, civil war,” the judge said, citing Fracker’s own Facebook messages to a friend in which he said “there’s hitters out here trying to make a fucking difference at any cost,” and that a confrontation between police and protesters was bound to “get spicy.”

“There’s a sense of bravado and lots of talk of patriots and patriotism,” the judge said. “Why do you think so many of the participants seem to view Jan. 6 in terms of civil war and fighting for their country?”

“I don’t think I really have a good answer for that one, sir,” Fracker said.

“Do you ever consider that the folks behind the idea that the election was stolen — of which there isn’t any evidence — may have targeted and taken advantage of folks, guys like you, for whom a message of patriotism might appeal?”

“I take it you now realize there’s nothing patriotic about interfering with … the peaceful transfer of power and breaking the law to show displeasure [about an election loss]?” the judge asked.

“Yes, sir,” the defendant said, adding that he’s felt that way “for quite some time now.”

In issuing his ultimate sentence, Cooper said he felt it was appropriate to go beyond what the government had requested.

“I don’t think you came to D.C. just to show support for the former president, but as you pled to, you came with intent to obstruct the certification, which is a goal you shared with Mr. Robertson,” Cooper said. “And that’s exactly what you helped to do, by being one of the first ones in the building, by staying in the building until after police had gained control. And while Ms. Aloi agreed not to mention it, you also participated in destruction of evidence afterwards.”

Cooper also told Fracker that he believed the defendant was truly remorseful about his actions on Jan. 6.

“Sometimes it’s difficult to tell, but from what I’ve seen here today, I think that you have reflected on your actions and you genuinely regret them and have accepted responsibility for them,” the judge said. “Not just regret getting caught, but regret the harm that was caused to a lot of people, including many of your fellow officers and many in the country generally.”

Cooper also praised Fracker’s military service as something about which the defendant could be “rightfully proud.”

“Mr. Fracker, I know that this has been a long road,” Cooper said. “I will say that you and Mr. Crane played the hand that you were dealt very well. I know that it’s been a difficult process. I know you have a young daughter who you are very close with. At some point you will have to explain all of this to her. I know that will be very difficult, but it will be an opportunity for a teaching moment and I would suggest whatever community service you choose to undertake that you use that also as an opportunity to use your influence in the community for positive good and maybe teach some young folks the lessons you’ve drawn from this experience.”

“You’re a young guy,” Cooper said. “I always tell folks they shouldn’t be judged by the worst mistake they’ve made and that certainly applies to you.”

“I have every confidence that you can put this behind you and get on with your life,” the judge added.

“I appreciate that, Your Honor,” Fracker said.