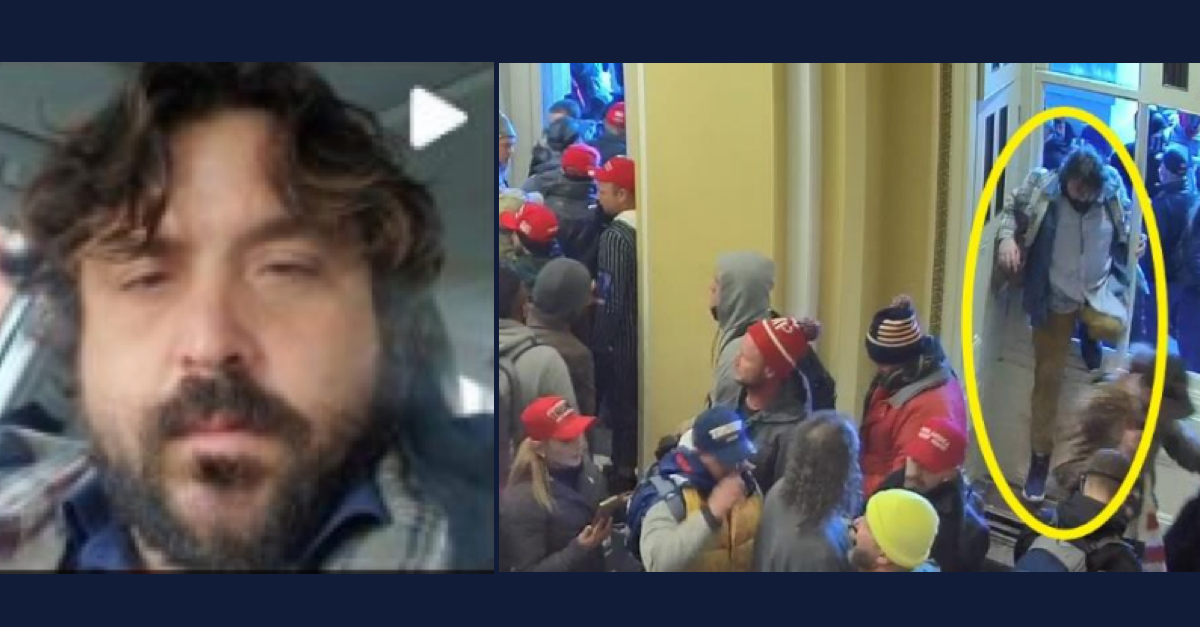 A failed New York state senate candidate who broadcast his participation in the Jan. 6 attack at the U.S. Capitol from his campaign Instagram account has admitted to illegally entering the building.

Daniel Christmann, 40, is accused of joining the mob of Donald Trump supporters who swarmed the Capitol building that day and breaching the building through a broken window. As Law&Crime previously reported, he described himself as a “maniac plumber” and “3%er soldier,” and he allegedly boasted to friends on social media about having stormed the Capitol before asking them to delete the incriminating video.

He pleaded guilty Monday to a single misdemeanor count of parading, demonstrating, or picketing in a Capitol building, a misdemeanor that carries a maximum six months behind bars.

He admitted to having travelled to D.C. from New York to attend Trump’s so-called “Stop the Steal” rally and then following the crowd from the rally to the Capitol. According to prosecutor Jason Crawford, Christmann saw a sign that said “Area Closed” as he approached the Capitol, as well as fencing and a metal barrier that had been knocked down.

Christmann also acknowledged that as he moved toward the Upper West Terrace of the building, he saw rioters clash with law enforcement and witnessed officers deploying chemical spray in order to push the crowd back. He also admitted to hearing alarms at the Capitol blaring as he entered the building at around 3:15 p.m., about an hour after the initial breach, through a broken window at the Senate Wing doors.

He stayed inside the Capitol for about three minutes, Crawford said, and made his way to the Capitol Crypt. He also entered an office and watched through the window as law enforcement outside tried to stop other people from entering the building.

He then returned to the Senate Wing door area and exited through a window opposite to the one he entered, the alarm ringing the entire time. Christmann also took some pictures and video while inside the Capitol, posting some to his social media accounts, where he admitted “numerous times” to entering the Capitol.

At the start of his hearing before U.S. District Judge Colleen Kollar-Kotelly, Christmann hinted that his decision to plead guilty may have been been one of impatience rather than remorse.

“I’m just here to move on with my life,” Christmann said after the judge first addressed him.

“I want to make sure you understand what you’re agreeing to,” Kollar-Kotelly, a Bill Clinton appointee, replied, signaling that the plea process requires a judge to be convinced that a defendant is making his plea knowingly and voluntarily, and not under duress.

“Although it wasn’t long and it wasn’t my intent to be a menace, I was in the building, and how am I going to get out of that?” Christmann asked, somewhat rhetorically, during his colloquy with the judge. “Let’s face the music and move on, that’s my stance.”

“I am in therapy, related to the injury,” an audibly emotional Christmann said. “I dedicated my whole life to being the best plumber in the world and I can’t do it any more.”

“I’m sure that’s not easy to accept,” Kollar-Kotelly replied.

Christmann’s political activity was not discussed during the hearing. He previously ran for president of the U.S. as a Libertarian candidate in 2020, but did not carry the party’s nomination. Later that year, he ran as a New York State Senate candidate for the “New Moderate Party,” losing to the Democratic and Working Families parties candidate Julia Salazar, who carried more than 97% of the vote.

Christmann’s Facebook page hints at a run for New York City Council, although public records do not list him as a current candidate.

“Is there some sort of gag order, can I talk about this?” Christmann asked the judge as the proceedings were coming to a close. Kollar-Kotelly reminded the defendant that he has a sentencing hearing pending and that prosecutors would be able to use anything he says against him in a sentencing memorandum.