‘Everyone Stayed’: Nancy Pelosi’s ‘Right-Hand Woman’ Shares Harrowing Jan. 6 Details at Trial of Man Who Kicked Up His Feet on Office Desk 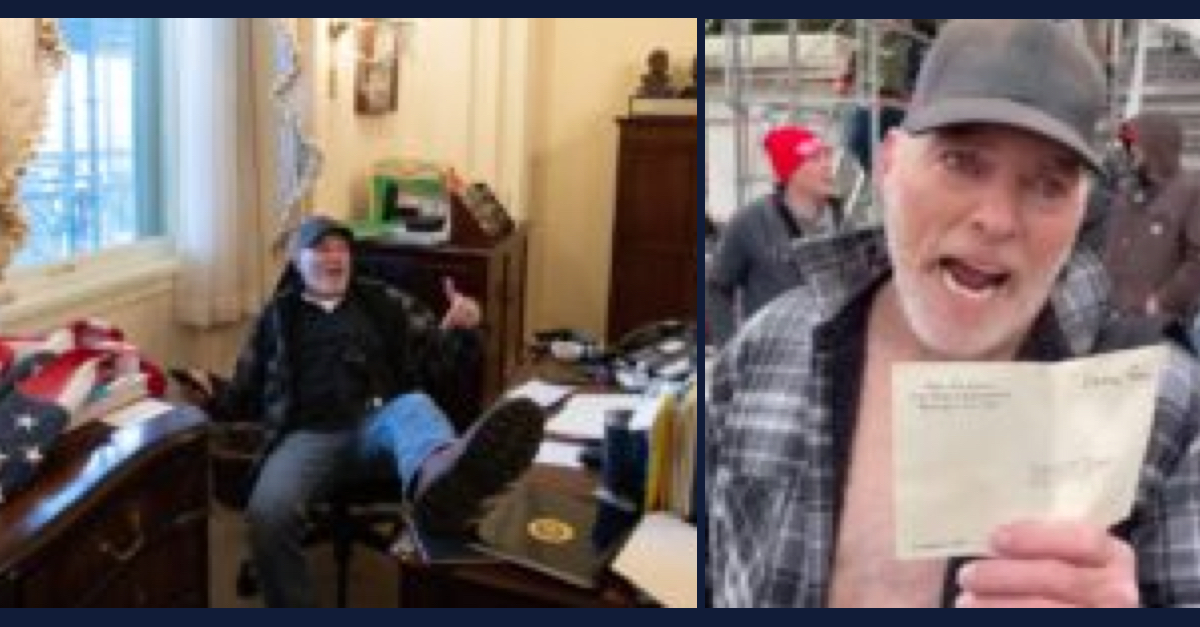 Angry supporters of former President Donald Trump came alarmingly close to breaking into a “safe room” where some of Nancy Pelosi‘s staff members had sought shelter from the mob that ravaged the U.S. Capitol building on Jan. 6.

Emily Berret, a top aide to the former House Speaker, offered harrowing details about the experience she and her coworkers had that day in testimony in the trial of Richard “Bigo” Barnett, the Alabama man who was pictured kicking his feet up on a desk in Pelosi’s office suite.

Barnett, who is facing charges including obstruction of Congress, theft of government property, civil disorder, and entering a restricted building with a dangerous or deadly weapon, had tried to block the jury from hearing Berret’s testimony, but to no avail: on Tuesday, jurors heard her account of the chaotic — and, at times, dangerous — day from the staffer who describes herself as Pelosi’s “right hand woman.”

“The Next Time You See the Whites of My Eyes, Take the Speaker Down.”

In January 2021, Berret was serving as Pelosi’s director of operations, the key person responsible for making sure the then-Speaker’s “priorities were met.” As such, she explained, she had an office adjacent to Pelosi’s in the Capitol. As the California Democrat and her staff prepared for the impending proceeding, in which Congress would certify Joe Biden‘s 2020 electoral win, Berret testified that the day started out as a normal — albeit important — day.

That changed at around 1:30 p.m., Berret said, when she noticed that members of Pelosi’s security detail, composed of U.S. Capitol Police officers, were “becoming more alert.” Berret testified that she realized that Trump’s so-called “Stop the Steal” rally had turned into something significantly more dangerous when she saw through a window that protestors were on the inaugural platform and approaching the doors to the Capitol.

But even as Capitol Police officers started barricading doors with furniture, Berret said that she expected the Electoral College certification to proceed as planned.

“I never could had imagined a breach,” she said.

Things escalated quickly from there. She recalled the security detail sergeant telling her to be prepared to move Pelosi out of the House Chamber, where she was leading the certification proceeding.

“The next time you see the whites of my eyes, take the Speaker down,” Berret recalled the sergeant saying to her, meaning that Pelosi would be rushed from the building. Shortly thereafter, that’s exactly what happened.

“We pulled the Speaker out into the hallway, and we started running,” Berret recalled. She said that the seriousness of the situation dawned on her at that moment, as she saw other lawmakers’ security details also running to get their protectees to safety.

Simultaneously, Berret testified, she instructed the staffers who were in Pelosi’s office suite to shelter in a windowless conference room that had two sets of double doors, with the interior set being “more hardened” than the other doors. This was the protocol that she and Pelosi’s security detail had prepared, Berret testified.

Berret only learned that the office suite had been breached — and that Barnett had sat himself down in her chair, at her desk — when she saw it all unfold on the television at the undisclosed location to which Pelosi and other congressional leaders had been evacuated. In the rush, Pelosi had left her cell phone behind on the rostrum in the House chamber, and Berret realized that she had left her personal cell phone, along with her purse, at her desk.

Berret still had her work phone, which she said “became the lifeline” for the evacuated lawmaker as she connected phone calls among congressional leaders and others in an attempt to asses the situation. Meanwhile, Berret’s work phone number, taken by rioters from business cards on her desk, had been posted on Twitter, causing significant interruptions to crucial phone calls.

“The First Doors Had Broken, So We Knew It Was Bad.”

At the same time, Berret said, she was frantically trying to get Capitol Police to evacuate her colleagues, the staff members who had sheltered in the “safe room” — which itself appeared to be on the verge of being breached.

“The first doors had broken, so we knew it was bad,” Berret said, adding that rioters were banging on the second, “hardened” set of doors. The eight staffers, meanwhile, had turned off all the lights in the room and set their phones to silent. Berret said she was communicating with them by text message only.

“I was trying to tell them everything would be okay, without knowing that,” she testified. “To us, it was a very bleak situation, but I couldn’t tell them that,” she added, noting that Capitol Police were not able to get through the rioters to reach the staffers and get them to safety.

After about three hours, police were able to clear Pelosi’s office suite. The staffers were not injured, and Pelosi, Berret, and the others who had evacuated returned to the Capitol shortly before 7:00 p.m. Berret testified that her office had been “trashed,” with blood visible on the floor and furniture. Many items were either broken or stolen.

She also came back to two threatening notes that were left on her desk.

“We will not back down,” one note read.

“Hey Nancy, Bigo was here, biatch,” said the other note, presumably written by Barnett himself.

Shaken but undeterred, Berret said, Pelosi’s staff resumed their work. Pelosi reconvened on the House floor at around 9:00 p.m., and they didn’t leave until around 3:30 or 4:00 a.m. the next morning.

During that time, Berret said she spoke to the staffers who had spent some three hours huddled under the desk in the windowless conference room, hearing the mob bang on the only set of doors that separated them. Berret, who said she felt responsible for the staffers’ safety because she was the one who told them to go that room, told her colleagues that they were free to go home.

While all but two of those staffers have since left government service, Berret said, none of them left that night.

“Everyone stayed,” she said. “No one went home. We all wanted to be together.”