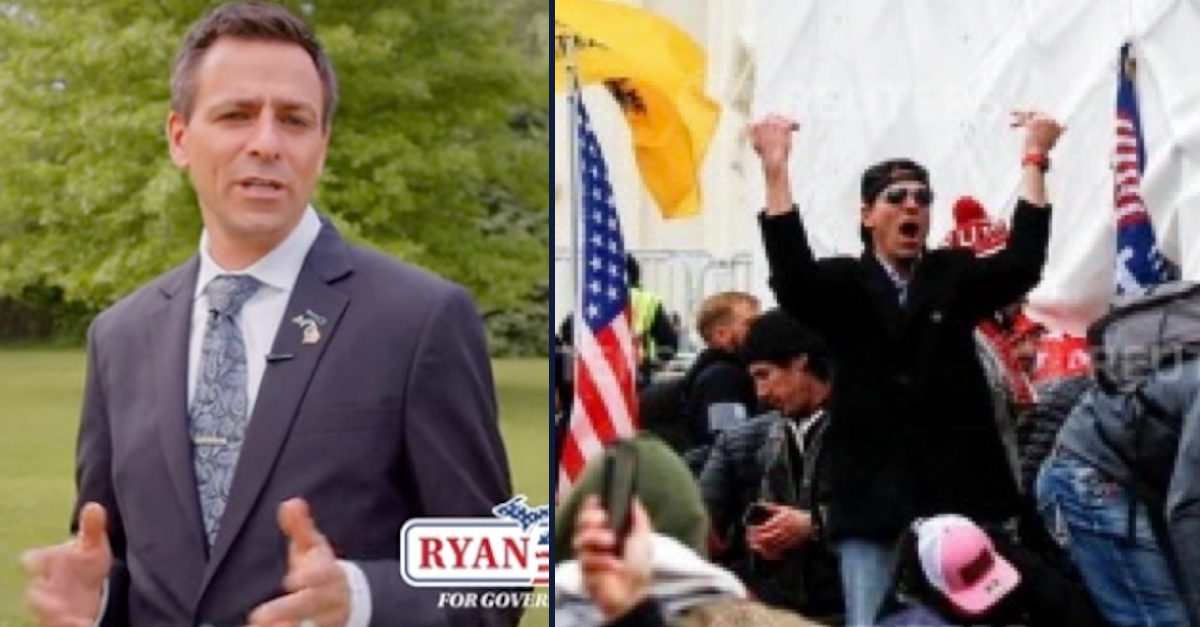 Left: Ryan Kelley in a campaign ad on his YouTube page. Right: Kelley among the crowd at the Capitol on Jan. 6.

Ryan Kelley, the Republican candidate for Michigan governor who was seen among the rioters at the U.S. Capitol on Jan. 6, pleaded not guilty on Thursday to federal charges for his alleged role in the siege.

Kelley, 40, was arrested last month in connection with the Capitol attack, when thousands of Donald Trump supporters stormed the Capitol in an effort to stop Congress from certifying Joe Biden‘s 2020 electoral victory. The rioters overwhelmed law enforcement and breached the building, forcing lawmakers and staff to either evacuate or shelter in place for hours.

According to federal prosecutors, Kelley participated in the effort to push past police and encouraged people to go inside the building.

Each charge carries a potential one-year jail sentence a fine of up to $100,000.

On Thursday, appearing via video before U.S. District Judge Christopher Cooper, Kelley pleaded not guilty to all of the charges against him.

In response to Cooper’s question about the current status of the litigation, Assistant U.S. Attorney April Ayers-Perez said that prosecutors have not extended a plea offer to Kelley and that discovery was just getting underway.

Cooper, a Barack Obama appointee, set a status conference for Sept. 22, and he cautioned Kelley to stay in compliance with the conditions of his pretrial release.

Kelley had previously objected to the condition that he had to surrender his weapons, arguing to U.S. Magistrate Judge Robin Meriweather that he needed to carry a concealed weapon for self-defense.

On Thursday, however, Kelley appeared to have no objections.

“Yes, Your Honor,” he replied to Cooper’s warning. “Understood.”

At the time of the Capitol attack, Kelley was a member of the Allendale Township Planning Commission. He announced his candidacy for Michigan governor less than one month later, in February 2021.

When he was arrested in June of 2022, Kelley was polling at the head of the GOP pack of gubernatorial candidates, according to one poll.

More recent polling suggests his lead has shrunk, and as of late June, he clocked 15% of potential Republican primary voters, with two rivals ahead of him with 15% each.

Days after his arrest, Kelley told the Detroit Free Press that the criminal charges have led to a “tremendous amount of support” in Michigan.

“Our supporters are really becoming activated all across the state,” he added. “The engagement has substantially increased.”

When asked whether he was trying to stop the certification of the presidential vote on Jan. 6, Kelley demurred, saying: “We’ll talk about all those details later.”

Kelley’s campaign website has provided a link to the conservative fundraising site GiveSendGo in support of his legal costs. As of Thursday, just over $16,000 of his stated $50,000 goal had been raised.