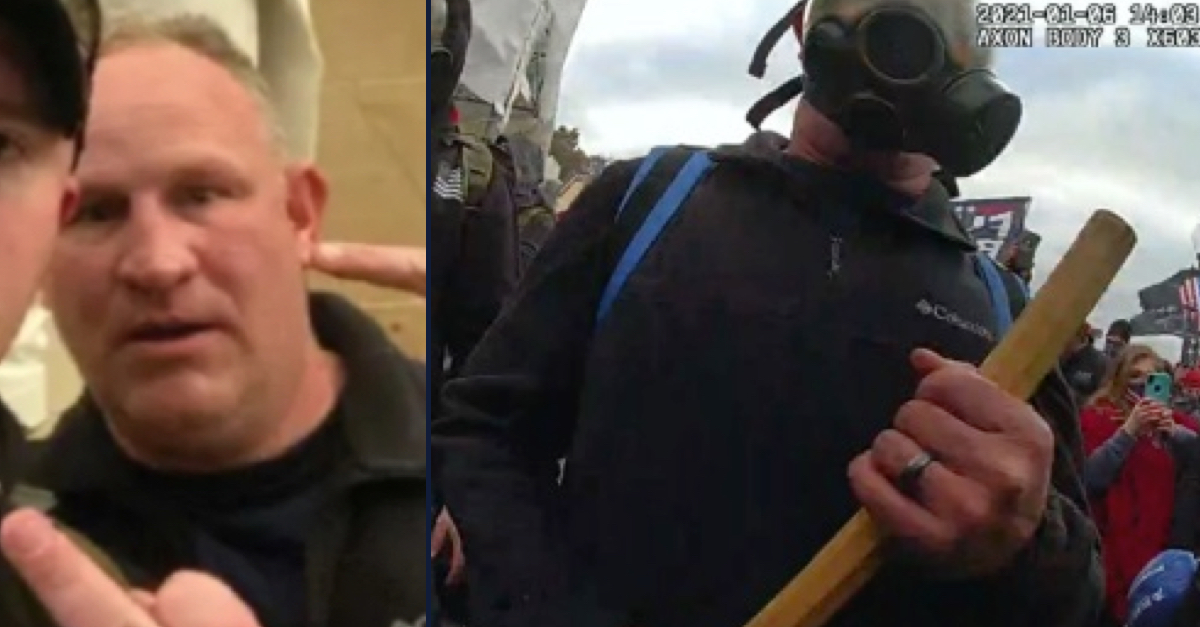 A former Virginia police officer who was convicted of felony obstruction will spend more than seven years behind bars for his role in the Jan. 6 attack on the U.S. Capitol.

Thomas Robertson, 49, learned his fate Thursday when he was sentenced by U.S. District Judge Christopher Cooper. The 87-month sentence was at the lowest end of the guideline range, which contemplated a sentence of up to 108 months. After prison, Robertson will spend three years on supervised release.

A federal jury convicted Robertson in April of all six counts against him, including obstruction of an official proceeding, obstructing officers during a civil disorder, and entering or remaining in a restricted building or grounds with a dangerous weapon.

According to court documents, Robertson played a key role in helping the mob of Donald Trump supporters — angry over their candidate’s loss in the 2020 presidential election — push past overwhelmed police and break into the Capitol building. The breach brought Congress’ certification of Joe Biden’s win to a halt, and forced lawmakers to either evacuate the building or shelter in place.

Robertson, his co-defendant Jacob Fracker, and a third friend approached the Capitol while wearing gas masks; Robertson himself was carrying a wooden rod that he described as a “walking stick,” but which prosecutors knew that he could use as a weapon, due to his police training.

Both Robertson and Fracker were serving as police officers in Rocky Mount, Virginia, at the time of the attack. They drove to D.C. together on the morning of Jan. 6, bringing with them their police ID badges and official firearms, although they left them behind in the car and did not bring them on Capitol grounds. They were seen taking a selfie inside the Capitol, standing in front of a statue while Fracker appeared to raise his middle finger to the camera.

Both men were both fired afterwards, although according to court documents, Robertson continued to boast about his involvement in the siege. Upon learning of the criminal charges against him, prosecutors say, Robertson destroyed both his and Fracker’s phones in an apparent attempt to hide evidence of their crimes.

Robertson was also sent back to jail months after his arrest, after guns and bomb components were found in his home in violation of the condition of his pretrial release.

Prosecutors had requested a sentence of 96 months behind bars. Robertson, through his attorney Mark Rollins, asked for a sentence of 15 months plus three years of probation, which would amount to time served, as Robertson has been in custody since July of 2021.

Aloi said that Robertson “has a track record of lying about his military service” and recalled Robertson’s claims that he had earned a Purple Heart, when he had not. Aloi added that the Stolen Valor Act makes it a crime to make a false statement about military awards.

“Is that under investigation as well?” Cooper asked Aloi.

“I cannot comment further on whether there is a criminal investigation,” Aloi responded. She later noted that Robertson at one point had claimed to have been injured during combat in Afghanistan, when in fact he was injured in Iraq while working for a private military contract company.

Rollins, however, insisted that Robertson was a dedicated public servant.

“He has always served his fellow man, whether it was in the army or the police force,” Rollins said at the sentencing hearing. “That’s all he’s known his entire life.”

Robertson, having submitted a letter to the judge ahead of sentencing, declined to speak on his own behalf at Thursday’s hearing.

That letter, Aloi said, was “riddled with falsehoods.”

“Truth has no meaning to this defendant,” the prosecutor said. “He’ll say whatever he thinks he needs to say to make excuses for his conduct.”

Indeed, Robertson’s letter points to several factors that he said contributed to his actions at the Capitol on Jan. 6. This included the fact that he became a caregiver for a friend suffering from brain cancer. This friend, Robertson said in his letter, was a “vocal and enthusiastic Trump supporter and as a result of caring for him I was exposed to lots of pro[-]Trump anti[-]Biden media.”

Robertson said he was under additional stress at that time due to his wife’s absence. According to Robertson, his wife had taken a job in New York, but according to Aloi, Robertson himself was “out cavorting with other women” at this time.

Judge Cooper said that he didn’t see Robertson taking responsibility for his actions.

“I read your letter, I appreciate your letter, you do say that you do take responsibility for your actions, but as Mr. Rollins said, you have no choice but to, because it was all on video and in your own words,” Cooper said.

The litany of reasons Robertson listed in his letter “may explain why you came to D.C. that day … but they don’t explain why you continued to arm yourself and advocate for violence, including against law enforcement, after your arrest.”

Cooper also noted that Robertson’s letter didn’t say anything about injuries suffered by police at the Capitol that day at the hands of the mob, and told Robertson that his propensity for violence is concerning.

“It’s my responsibility to protect the public, and that’s’ the most striking and concerning part about this case … your conduct after your arrest,” Cooper said.

“It really seems like you think of partisan politics as war,” the judge continued. “And that’s just not the right way to think about it. You continue to believe these conspiracy theories about the election being stolen, despite no evidence of that whatsoever. I sincerely believe that you would likely answer a call to duty if you were called to go do something like this again, and that’s the biggest consideration that this court has to consider.”

After issuing his sentence, Cooper framed prison as an opportunity for Robertson to turn his life around.

“I would encourage you to find something you can connect with that appeals to you, that perhaps you can even lead, given your background and skills,” the judge said, citing education and training opportunities available to federal inmates. “It will be very important for you to stay engaged and get the most out of this opportunity, as unfortunate as it is.”

“I often tell defendants they should not be judged by the worse decision that they’ve made, and that certainly applies to you,” Cooper told the defendant, later adding: “I would encourage you to put this behind you, to perhaps broaden your perspectives a little bit, what you rely on to get information, and to be more discerning about the information you get.”

Fracker pleaded guilty in March to one count of obstructing an official proceeding. As Law&Crime previously reported, Fracker agreed to cooperate with the investigation and the case against Robertson, and according to prosecutors, Fracker’s testimony at Robertson’s trial was crucial in securing a conviction.

Fracker is scheduled to be sentenced on Tuesday. Prosecutors, citing the “nature and scope of Fracker’s cooperation,” have asked for a sentence of six months’ probation.