The #Resistance Folds: Unites With Trump And Deep State To Protect Warrantless Surveillance 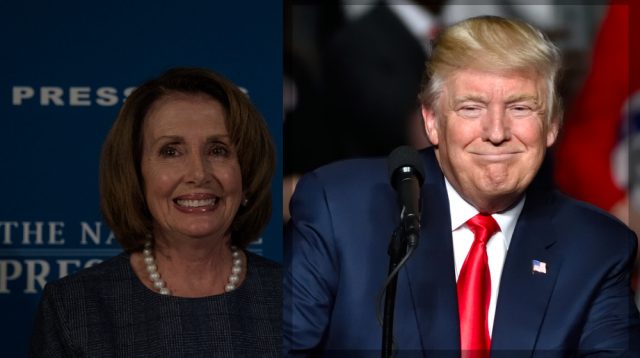 President Donald Trump confused some people about warrantless surveillance this morning. But Democrats and Republicans in Congress got the real message loud and clear.

First, at 4:33 a.m. Trump tweeted out what appeared to be a semi-coherent criticism of the Foreign Intelligence Surveillance Act (“FISA”). He wrote:

“House votes on controversial FISA ACT today.” This is the act that may have been used, with the help of the discredited and phony Dossier, to so badly surveil and abuse the Trump Campaign by the previous administration and others?

Trump’s question mark was appropriate. Maybe FISA was used to obtain authority for still-unproven Trump Tower surveillance. Maybe not. We may never know because FISA Court (“FISC”) proceedings are wholly secretive exercises conducted with absolutely no meaningful oversight. But this tweet from Trump was odd, because he appeared to be taking the side of an issue the GOP is firmly opposed to.

Then, at 6:14 a.m. Trump reversed himself by endorsing FISA renewal while making an irrelevant comment possibly intended to deflect. He wrote, “With that being said, I have personally directed the fix to the unmasking process since taking office and today’s vote is about foreign surveillance of foreign bad guys on foreign land. We need it! Get smart!

The law was initially passed to retroactively legalize the crimes of the George W. Bush administration after they were revealed publicly. Section 702 was then reauthorized, solidified and became part of the bi-partisan consensus by Barack Obama and his Democratic Party super-majorities in Congress in 2009.

Deep state aficionados and other nat-sec-brained ghouls who despise the U.S. Constitution’s protections on individual liberty are big fans of Section 702. They argue, without credibility, that the focus of Section 702 is on foreigners. This is not really true and not particularly germane: the U.S. Constitution protects everyone on American soil or under U.S. jurisdiction–the enumerated rights are not supposed to be limited to Americans alone. The Century Foundation explains why Section 702 is so controversial now:

Section 702 is important because it allows intelligence agencies to intercept electronic communications on U.S. territory for foreign intelligence purposes without prior approval of a court—a practice that had been outlawed for decades. Under that legal authority, the NSA scoops up international communications as they pass through large internet switches in the United States, and the FBI, on NSA’s behalf, collects email, chats, photos, documents, and other electronic data stored by U.S. companies such as Google, Yahoo, and Microsoft…Section 702 allows intelligence agencies to choose their targets without disclosing or defending them in court. The FISC approves a set of rules and procedures once a year and the government promises to follow them. But the government does not have to tell a judge who it is spying on or why.

Even the above description undersells the truth about Section 702. In effect, the provision is used to unconstitutionally conduct mass surveillance on American citizens. It can be stated, without hyperbole, that Section 702 has all-but erased the Fourth Amendment to the U.S. Constitution. Edward Snowden noted the extent to which the National Security Agency (“NSA”) illegally uses Section 702 to intrude upon Americans’ privacy and trample the Bill of Rights:

The Fourth Amendment is, at heart, a prohibition against general warrants. Only particularized warrants are permissible and must be based “upon probable cause, supported by Oath or affirmation, and particularly [describe] the place to be searched, and the persons or things to be seized.” Section 702, in theory, is supposed to prohibit the collection of Americans’ data and communications. But let’s leave hearts and theories out of this entirely.

In practice, Section 702 is a vulgarly legalistic validation of general warrants. Most of Section 702 surveillance actually conducted has nothing to do with foreigners or terrorists of any sort–the vast majority of allegedly unintentional targets are regular internet users in the United States–by a measure of nearly 10 to one, according to a 2014 report by The Washington Post.

As The Intercept has noted, U.S. law enforcement agencies use unconstitutionally-obtained Section 702 evidence against everyday criminal defendants. This evidence is gathered in secret–and it remains secret. According to the law, defendants are supposed to be notified when secretive, warrantless surveillance data is used against them–but America doesn’t really have the rule of law.

In practice, defendants are usually kept in the dark about the secret data used against them–data that is collected in violation of the Fourth Amendment in the first place. But who cares about breaking the law in question–Section 702–when the law itself flagrantly sidesteps the Fourth Amendment?

There was an amendment that would have closed the so-called “loophole” used to unconstitutionally surveil American citizens. (The loophole being: the NSA does the surveilling and then shares it with the FBI after the fact. In plain language we might call this a “conspiracy.”) It’s called the USA RIGHTS Act. That amendment to the FISA renewal bill would have made it illegal for the government to use surveillance tools against Americans without a warrant. According to Senator Ron Wyden, one of the Act’s Democratic co-authors in the Senate:

The bill reforms Section 702 of the Foreign Intelligence Surveillance Act to end warrantless backdoor searches of Americans’ calls, emails, texts and other communications that are routinely swept up under a program designed to spy on foreign targets.

The USA RIGHTS Act failed today. That failure occurred, in large part, due to the votes of House Democrats.

Included among them were Hashtag Resistance heroes-cum-hucksters like Adam Schiff, Nancy Pelosi, Joaquin Castro and Democratic Senate candidate for Arizona in 2018, Kyrsten Sinema. Pelosi and Paul Ryan even took to the House floor to urge a vote against the USA RIGHTS Act. These faux resisters were cheered on in their support for Section 702 by none other than James Comey.

In sum, 65 Democrats joined 191 Republicans by voting to reauthorize Section 702. Donald Trump may have started out the day being confused–and confusing–but the deep state consensus and B.S. #Resistance cleared things up for him fairly fairly quickly.