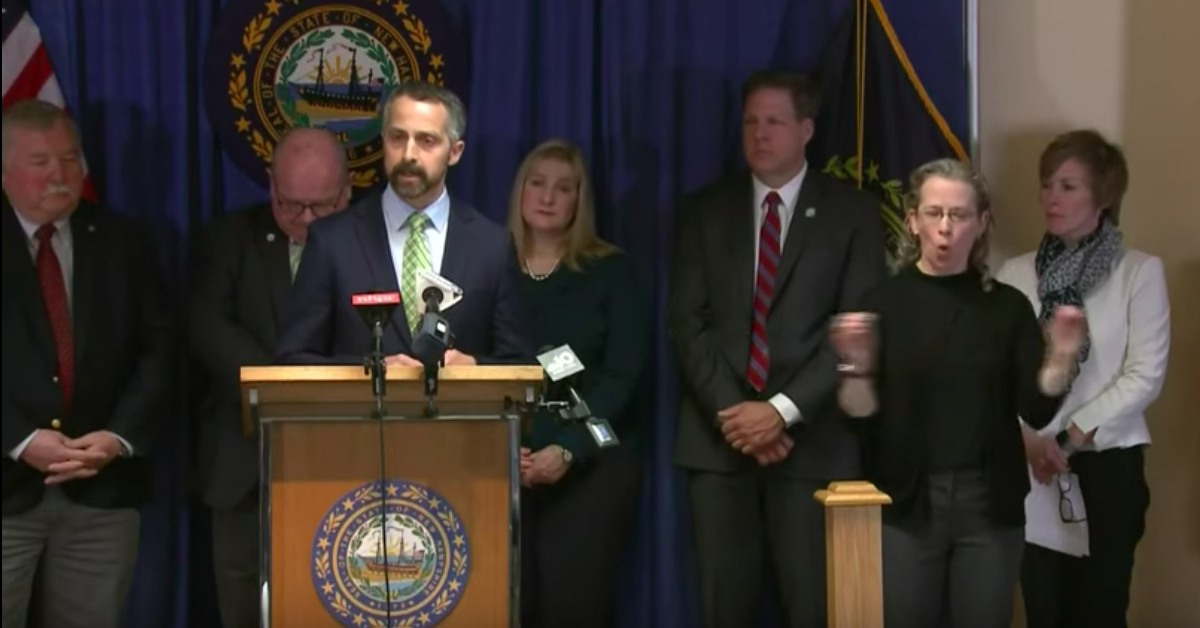 Three New Hampshire residents filed a lawsuit against the state’s Republican Gov. Chris Sununu, claiming Monday’s emergency statewide ban on gatherings of 50 or more people to prevent the spread of the COVID-19 coronavirus violated their First Amendment rights to freedom of assembly and freedom of religion.

In a 12-page lawsuit, which was filed in Merrimack County Superior Court one day after the order went into effect, David Binford, Eric Couture and Holly Rae Beene argued that the global pandemic does not rise to the level of an “emergency” as defined in the state constitution.

“The State is unable to meet this very high burden,” the complaint stated. “Presently, many more people die from, are diagnosed with, or hospitalized with the flu, etc. than Covid 19. The numbers aren’t even close. New Hampshire has had just 17 people diagnosed with Covid, and ZERO deaths. In a state of over 1 million people, those numbers alone make it clear this is not an emergency.’”

The number of coronavirus cases in the state jumped to 44 as of Thursday.

Additionally, it should be noted that the medical community has aggressively denounced such comparisons to the flu as erroneous and potentially harmful. Dr. Anthony Fauci, director of the National Institute of Allergy and Infectious Diseases and the federal government’s top infectious disease expert has repeatedly debunked the talking point, saying that the coronavirus is 10 times more deadly than the seasonal flu.

The plaintiffs claimed they had planned on attending a variety of political and religious gatherings, both of which require “the utmost protection” from government intrusion.

A judge denied the plaintiffs’ motion to block the governor’s order and a hearing is scheduled for Friday.

“We can choose to assemble if that is our desire. What cannot occur is one man in a position of power deciding to strip us of our rights in the name of safety and without due process,” Couture said in press release.

A spokesman for Sununu on Thursday said the ban is consistent with actions taken by every state across the country and is clearly within the governor’s authority.

“If the governor has unilateral authority to declare anything an emergency, and take action to effectively revoke constitutional rights, we no longer live in a Constitutional Republic,” the plaintiffs’ attorney Daniel Hynes said in a press release.

Hynes was convicted of extortion in 2009 after sending at least 19 different letters accusing local salons of violating gender and age discrimination laws for charging men, women, and children different prices for haircuts, and demanding $1,000 to avoid litigation.

“I am writing in regards to your company’s policy of pricing for different types of haircuts,” Hynes wrote in the cease and desist letters. “It has been brought to my attention that your business charges $25 for haircuts but $18 for a Men’s cut and $12 for a children [sic] haircut. Such a distinction in price based on gender and age is discrimination in violation of the law. Accordingly, I demand you immediately cease this unfair pricing and charge customers in a more appropriate manner, such as by the length of their hair or the amount of time it would take.”

He was arrested after accepting a $500 cash “settlement” from an undercover investigator.

See below to read the full lawsuit and press release.