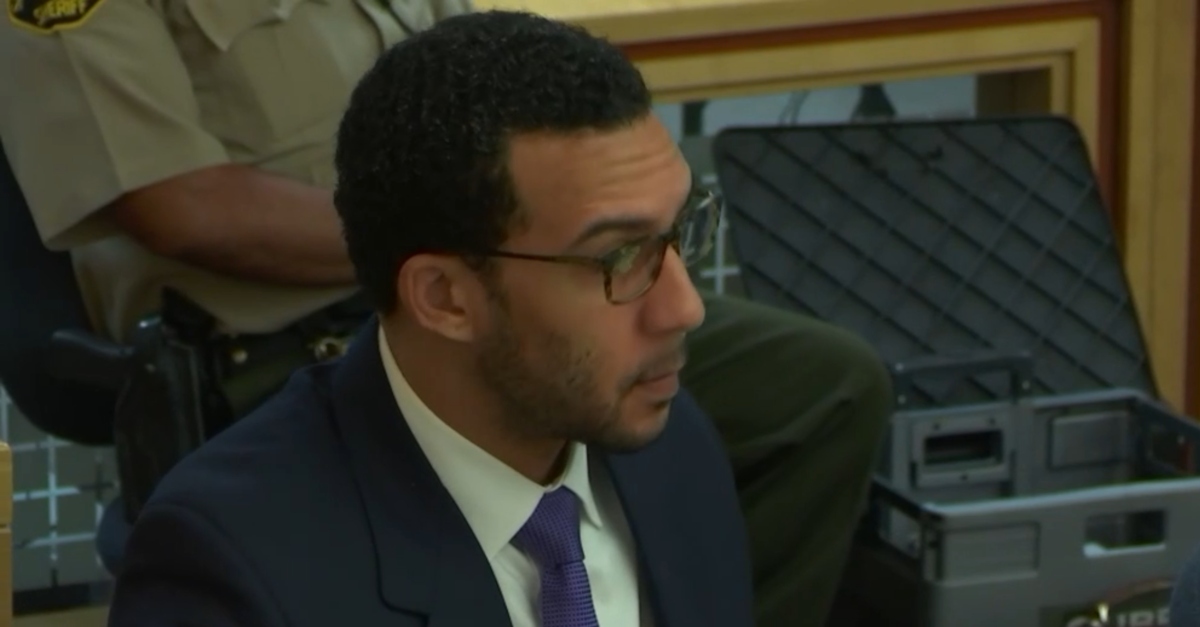 Things got pretty awkward Wednesday when an attorney for former NFL player Kellen Winslow II told one of the alleged victims to look at her alleged rapist.

Winslow is accused of raping three women and of allegedly performing lewd acts in front of two others. Jane Doe 2, 58, took the stand Wednesday. She said she knew the defendant as “Kevin,” that they’d been acquainted for months, and that he had been kind until he raped her on May 13 of last year. She claimed that he’d pulled up in his Hummer and took her on what was supposed to be a trip for some coffee. (Doe 2 said she had been homeless.)

She claimed that Winslow had previously offered her $50 for sex, but she rejected him.

#KellenWinslow – You can hear Jane Doe #2 breathing heavily as she starts to talk about that night. Her voice is also getting softer. She’s rocking back and forth. pic.twitter.com/U7SMiPfB4j

Doe 2 was very soft-spoken and apparently anxious during her testimony, even during direct examination with a friendly prosecutor. The judge directed her several times to keep her voice up and to let the state finish answering questions before answering. At one point, the judge even asked if she was okay or wanted to take a break.

Attorney and Law&Crime Network trial analyst Julie Rendelman suggested before cross-examination that the defense had to be cautious with Doe 2.

Jane Doe #2….comes off as very soft-spoken and nervous on the stand with some memory issues…the defense is going to have to tread very carefully during cross examination if they are going to be effective. #KellenWinslow https://t.co/tVeLjbjIeC

The defense is trying to show that the alleged rapes were consensual infidelity. It was “sex,” the defense said. Accordingly, Winslow’s attorneys are trying to undermine the credibility of all five of the alleged victims.

Check out the #KellenWinslow sexual assault trial today, live, on the @LawCrimeNetwork. The defense has been extremely effective thus far in poking holes in the credibility of the state’s witnesses during cross-examination. https://t.co/kNI0cROfKQ

Criminal defense attorney and Law&Crime host Bob Bianchi discussed the case with defense lawyer Gene Rossi.  They disagreed as to the effectiveness of Doe 2’s testimony. Bianchi, a former prosecutor out of New Jersey, said it wasn’t doing it for him. Rossi, a former federal prosecutor, said she was overall solid. He described her as vulnerable, and with a good demeanor, though she went on tangents. Jane Doe 1, he said, was the opposite.

This alleged victim — a woman in her 50s — testified Tuesday. She had been described as a transient. She said Winslow raped her and threatened to kill her. During cross-examination, the defense attempted to impugn her memory. She is the same woman who mistook defense lawyer Brian Watkins for the defendant in a preliminary hearing. You can see the attorney in the gif below. He is clean-shaven. Winslow had glasses, but lacked his beard in the preliminary hearing.

#KellenWinslow – Under cross-examination Jane Doe #1 defending her misidentification of the lawyer instead of Winslow she said Winslow’s hair is different than at preliminary hearing. Winslow shakes his head. pic.twitter.com/dauPeKoGUo

#KellenWinslow – Defense attorney now bringing up each incident the judge ruled they could. She doesn’t recall 3 of the 5 arrests the defense brought up. “Is there a chance you blacked it out?” pic.twitter.com/ptsa5gum76

Neither Doe 1 or 2 identified Winslow’s black Hummer as the one they saw their alleged attacker driving .