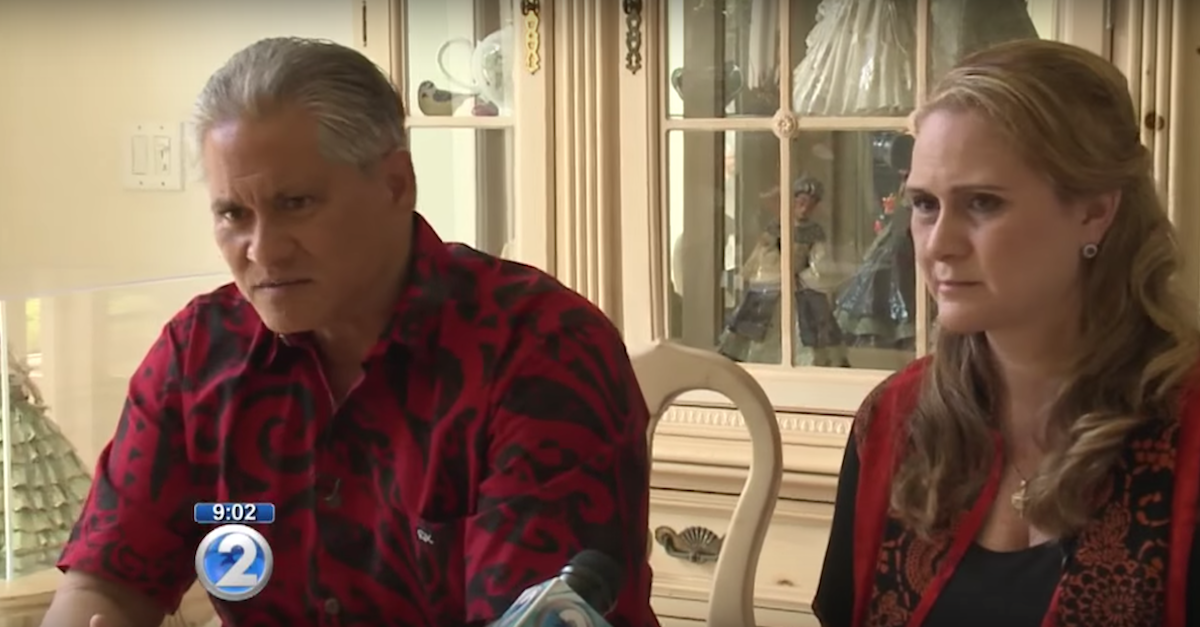 The trial of Honolulu police chief Louis Kealoha and his attorney wife Katherine Kealoha began on Wednesday. The allegations against them range from theft of money from a trust that Katherine Kealoha was put in charge of by the state to framing family members for a crime they did not commit to shut them up about the fraud the couple was allegedly perpetrating.

These are four of the wildest allegations brought forth by prosecutors in a case dubbed the “biggest corruption case in Hawaii history.”

Prosecutors alleged that Katherine Kealoha’s grandmother and uncle told her that they were going to report Kealoha’s fraud. Kealoha’s alleged response was to have her grandmother Florence Puana, 99, declared incapacitated and to frame her uncle, Gerard Puana, for stealing the Kealohas’ mailbox. After that, Puana told his public defender, Alexander Silvert, that his niece was setting him up. At first, it seemed too outlandish that this powerful couple would set up his client, but the scheme began to unravel after the accused allegedly lied about the value of the mailbox: they said the mailbox was worth $380, when it only cost $180. This difference made the offense a felony instead of a misdemeanor.

“When I realized they were lying about the make and model of the mailbox, then I was ‘OK, there’s something going on,'” Silvert said.

Puana’s case eventually lead to a mistrial in 2014. The aforementioned Puanas brought a civil suit against Katherine Kealoha, but a jury sided with Kealoha in 2015.

Katherine Kealoha, an attorney, was put in charge by the state of Hawaii of a trust fund for two children. The indictment alleged that Kealoha periodically stole tens of thousands of dollars from the trust to pay off a personal loan, overdraft charges and mortgage payments. The indictment stated that Kealoha deposited “over $167,000 to be held in trust for their benefit. Pursuant to a state court order, all disbursements and transactions associated with these trust accounts were to be approved by both K. KEALOHA and her cocounsel in the state court guardianship case (‘Attorney I’).”

The couple allegedly lied on bank applications about rental income they did not have in order to get a second mortgage on their home:

It was part of the scheme that L. KEALOHA and K. KEALOHA would apply to HCFCU for a second mortgage on their then personal residence in the amount of $150,000, and falsely certify that the information provided in support of their application was true and correct … On or about July 24, 2012, within the District of Hawaii, K. KEALOHA and L. KEALOHA knowingly executed the scheme by falsely certifying in a Form 1003 loan application that they received over $2,700 per month in rental income, when in fact no such lease agreement existed and the defendants did not receive such rent or lease payments.

It was further part of the scheme that in or about June 2010, K. KEALOHA altered monthly statements for one of the Trust Accounts to make it appear that she owned the accounts, and forwarded those altered documents to HUSAFCU to support the loan application … on or about July 6, 2010, using the alias Alison Lee Wong, K. KEALOHA sent a fabricated email to herself at a different email address, and forwarded that email to her mortgage broker, in order to make it appear that derogatory credit associated with K. KEALOHA was erroneous, and that KEALOHA’s assistant, “Alison Lee Wong,” was attempting to correct such errors.

Katherine Kealoha is also charged with trying to “obstruct, influence, and impede an official proceeding.” A grand jury was investigating whether she had misappropriated the funds for the trust account of the two children. Kealoha allegedly “caused” the children “to testify falsely before the Federal grand jury concerning the Trust Accounts” and “sent an email attaching false and misleading documents” for the children to submit to the grand jury.

Louis and Katherine Kealoha proclaimed their innocence during an interview with KHON2 News.

“It is extremely frustrating that these issues are continue to be brought up over and over again when we’ve basically laid them to rest,” Katherine Kealoha said.

“I dedicated my life to public service. I have 33 years in the police department, six and a half as the police chief,” Louis Kealoha would add. “There is nothing that I would do to violate the symbol of the badge, which is public trust.”

Kealoha Indictment by Law&Crime on Scribd