U.S. Capitol Police Lt. Michael Byrd revealed himself on Thursday’s “NBC Nightly News” with Lester Holt as the man who shot and killed Air Force veteran, self-proclaimed “pissed off” person and noted Lin Wood supporter Ashli Babbitt inside the U.S. Capitol on Jan. 6th. Byrd’s interview has naturally resulted in a rancorous debate which predictably devolved along the lines of race and politics. Few, however, have examined the legal standard by which Byrd’s actions have been judged and perhaps will be judged again in civil suits.

But what’s notable about Byrd’s interview is how cleanly it lays out a defense for his actions under the legal concept of justification — that one person can shoot and kill another and be justified in so doing. Self-defense and the defense of others (e.g., members of Congress) are affirmative defenses under federal criminal law. Let’s start with the Washington, D.C. code section that lays out the parameters of the defense (emphases added):

A law enforcement officer shall not use deadly force against a person unless:

(2) The law enforcement officer’s actions are reasonable, given the totality of the circumstances; and

(3) All other options have been exhausted or do not reasonably lend themselves to the circumstances.

The law forces us to judge the situation primarily — perhaps almost entirely — based on what is going on within the mind of the officer himself. When rephrased, the legal question is whether the law enforcement officer had a reasonable belief that other people needed immediate protection from serious bodily injury or death.

The reasonableness standard does allow for some objective (e.g., hindsight) dissection of the situation, but any wiggle room afforded is minimal: it is coupled to the subjective assessment of the officer himself. The statute further illuminates that point (again, emphases added):

A trier of fact shall consider:

(2) The totality of the circumstances, which shall include:

(A) Whether the subject of the use of deadly force:

(i) Possessed or appeared to possess a deadly weapon; and

(C) Whether any conduct by the law enforcement officer prior to the use of deadly force increased the risk of a confrontation resulting in deadly force being used.

“I know I was doing my job,” Byrd told NBC’s Holt in a portion of the interview broadcast Thursday on “NBC Nightly News.” Additional portions of the interview appeared on Wednesday’s version of “Today.”

The “Nightly News” interview explained Byrd’s subjective thoughts — what was going through his head leading up to the shooting:

HOLT: What are you hearing on your radio?

HOLT: Did you ever hear a call or a report of shots fired during any of this?

BYRD: As a matter of fact, I did. There was reports of shots fired through the House main door, onto the floor of the chamber.

“Later, those reports would prove to be false,” Holt noted with reference to the latter. But that would likely not affect a legal assessment of the situation. Byrd subjectively believed shots had been fired, that officers were down, and that officers were being overrun. Most of that was true. Byrd’s assessment that what he was hearing from fellow officers on his police radio was either true or close to the truth was likely reasonable as well given the totality of the circumstances of the Jan. 6th breach of the Capitol.

Eventually, an angry pro-Trump mob appeared at the doors Byrd was guarding, and Byrd said he and others screamed out warnings to the throngs of people confronting them that the mob needed to back down.  (Some conservatives have disputed whether warnings were given.)  And video of the scene indicated that elected officials were, indeed, present in the moments leading up to the attack:

LIEUTENANT MICHAEL BYRD: I had been yelling and screaming as loud as I was, “Please stop. Get back. Get back. Stop.” We had our weapons drawn.

HOLT: We see your arm out there for a considerable amount of time. Were you wavering?

BYRD: I was again, taking a tactical stance. You’re ultimately hoping that your commands will be complied with and unfortunately, they were not.

HOLT: When you fired, what could you see? Where were you aiming?

BYRD: You’re taught to aim for center mass. The subject was sideways and I couldn’t see her full motion of her hands or anything. So I guess her movement caused the discharge to fall where it did.

HOLT: And what did you think this individual was doing at that moment?

BYRD: She was posing a threat to the House of Representatives.

Legally speaking, Byrd fired his gun when he subjectively believed that he needed to take immediately necessary action to stop the threat posed by Babbitt and the mob around her from harming another person.

HOLT: Her family points out that she was not armed.

HOLT: The fact that you weren’t aware whether she was armed or not, did that alter the decision making?

BYRD: It did not.

HOLT: What are we to make of the fact that there were other officers in potentially life threatening situations who didn’t use their service weapons that day?

BYRD: I’m sure it was a terrifying situation. And I can only control my reaction, my training, my expertise. That would be upon them to speak for themselves.

On NBC’s “Today,” Byrd recalled the radio chatter as follows:

BYRD: The yells for help and you know, “Officer down” and, screaming as they’re being assaulted.

HOLT: Based on your training, in that case, does it matter that the person was armed or not?

BYRD: According to law, it does not. I know, based on my training and my policy what I did was appropriate.

Byrd is correct on the law: nothing in the justification statute cited above requires the person being shot (here, Babbitt) to be armed with a weapon. As the statute itself points out, it is helpful to the analysis: if Babbitt hypothetically had displayed a weapon when she climbed through the window, it would have been easier to justify Byrd’s actions. But the lack of a weapon is not dispositive. The law is best restated like this: the police can meet “threat of serious bodily injury or death” with deadly force. Hundreds upon hundreds of angry people crashing into the halls of Congress — some of them wearing tactical gear, some allegedly carrying or beating officers with deadly weapons, and some allegedly attacking officers with chemical irritants — can hypothetically cause death or serious bodily injury by the sheer force of their numbers. An angry mob of people screaming and shouting about an election can still present a serious threat if they outnumber the assembled law enforcement forces and resort to destructive violence. Though many conservatives — including Babbitt’s husband — have drawn considerable attention to Babbitt’s lack of a weapon, it is not completely dispositive of the threat posed by the situation in its entirety. It weighs against Byrd but is only part of the “totality of the circumstances” analysis contained within the statute.

Byrd said he was behind doors which fellow officers barricaded with furniture in order to try to prevent the mob — including Babbitt — from getting to members of Congress that had been issued ordered to don gas masks and to even attempt to disguise themselves to look like staffers should the insurgents cross the threshold. And Byrd suggested to Lester Holt that he considered the threat to be imminent — that the threshold of the doors Babbitt’s crowd tried to break down was the line of last resort.

“I am afraid because I know there’s people that disagree with my actions on January the 6th,” Byrd also said. “But I hope they understand I did my job. And there was imminent threats and danger to the members of Congress.”

Critics may quibble with precisely how close the members of Congress were to Byrd. But by his knowledge — remember, the analysis is subjective — elected officials were in close proximity and had not yet (or had not fully) evacuated the premises. Was it reasonable for Byrd to think the members of Congress were close? He told Lester Holt he had ordered them to take cover shortly before Babbitt tried to climb through the window and into the Speaker’s Lobby where Byrd was positioned. 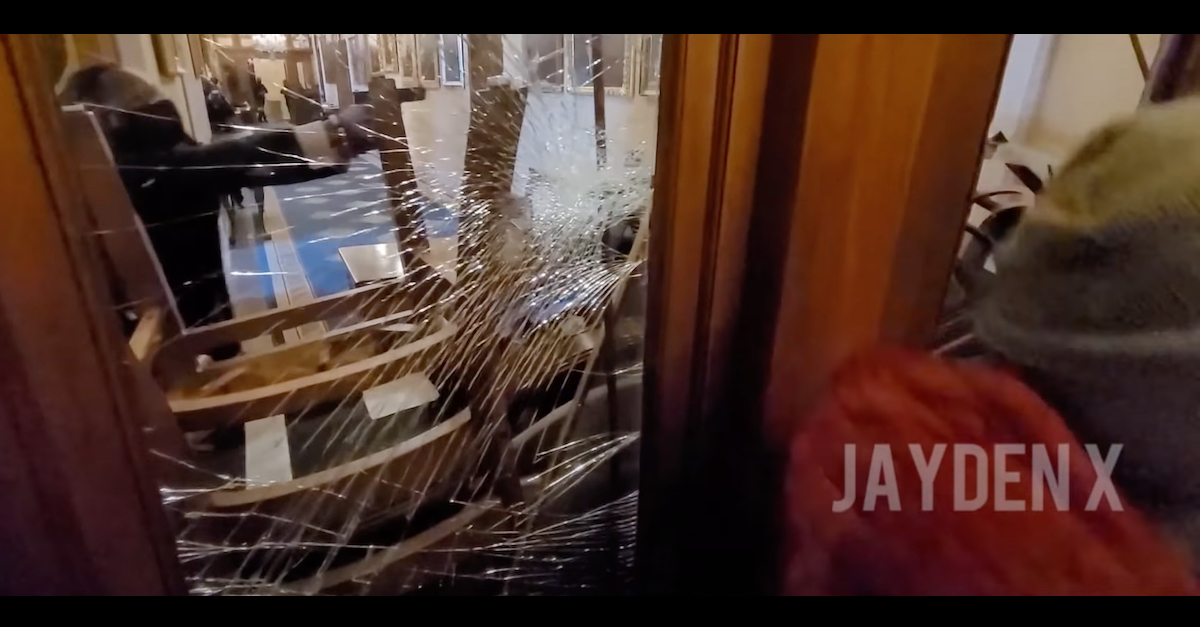 A YouTube screengrab shows an officer since identified as Lt. Michael Byrd preparing to shoot Ashli Babbitt on Jan. 6, 2021, in the U.S. Capitol.

In the NBC interview, Byrd articulated why he believed an imminent threat was immediately present, and he explained the factual scenario a trier of fact could have used to back up his claims: other officers were reportedly injured; he ordered lawmakers to evacuate; and he was confronted by a mob which allegedly refused commands to back down. Byrd’s statements to Holt were probably a lot like any statements he may have made during the internal affairs investigation by his own police force and the probe commenced by D.C. prosecutors to determine whether a crime was committed.

Holt reminded Byrd that the Capitol Police said in a press release that the then-anonymous Byrd’s actions saved lives.

Byrd replied, in essence, that’s why he felt he had to pull the trigger.

“That was my mission,” Byrd said. “That was what I prepared for. And it’s rewarding and refreshing to hear that.”

When asked to speak directly to the family of Ashli Babbitt, Byrd issued a general statement of sympathy for all those affected by the events which concluded in violence in a building dedicated to rigorous yet nonviolent debate.

“What I would like to say is to all the families from January the 6th, that their family members received injury or lost of life, that my heart goes out to them,” Byrd told NBC News. “I’m sorry for their loss and what they’re dealing with, and I pray that they find peace and comfort.”

A 2019 bill introduced by Rep. Ro Khanna (D-Calif. 17) would have stripped some of the legal protections federal law enforcement officers currently may rely upon when using deadly force. That bill stalled in committees and never became law.