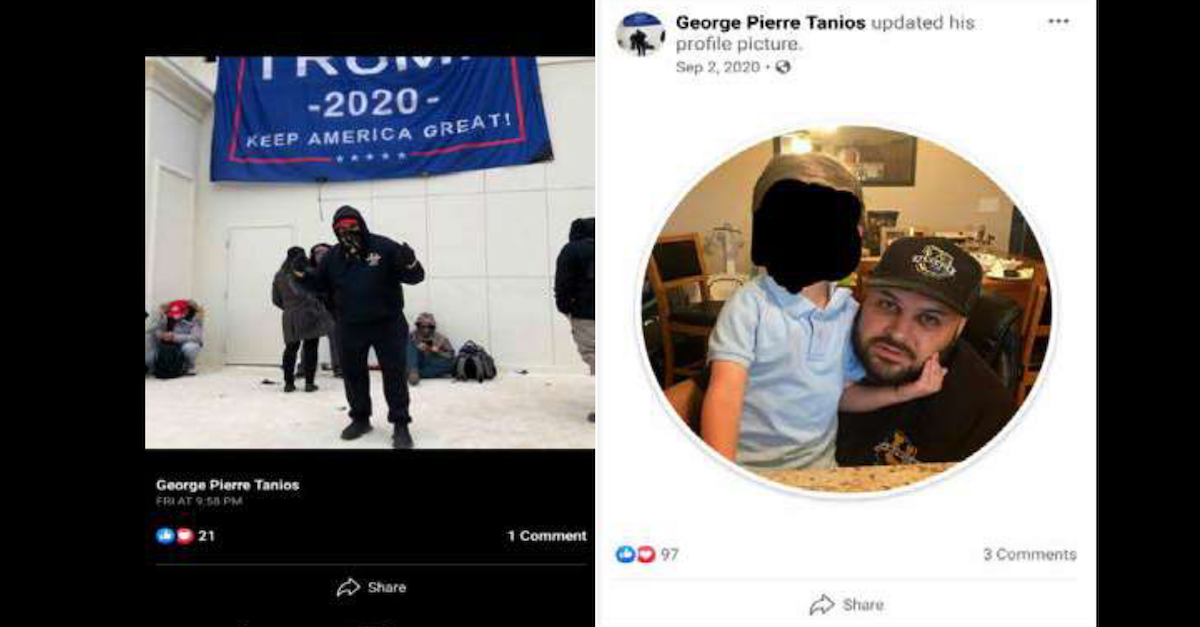 Accused Capitol rioter George Tanios, who was charged last week in connection with the assault on the late Officer Brian Sicknick with bear spray, must stay in jail pending trial on several charges related to the Jan. 6th insurrection, a federal judge ruled on Monday.

“I’m very aware that my rulings affect the person in front of me and everyone who loves them,” Judge Aloi noted, adding that it also affects everyone who has been harmed by a suspect’s alleged actions.

Stating that he is satisfied with the government’s evidence, the judge said: “It is hard for me to look at this as anything other than an assault on this nation’s heart.”

Capitol Police have not yet provided an explanation for what they believed caused Officer Sicknick’s death the day after a pro-Trump mob invaded Congress, but some two months after his death, authorities named two of his accused assailants: Tanios, 39, and Julian Elie Khater, 32.

“They were supporting a president who would not accept the fact that he was defeated in an election,” the judge noted.

“We’ve created this culture, radicalized by hate, and refusal to accept the result of a democratic process,” the judge added later. “And given that, two college friends decide let’s go. Why?”

According to the FBI, a tipster informed the bureau that the men know each other from the Garden State, where they grew up together.

“Hold on, hold on, not yet, not yet… its still early,” Tanios allegedly responded.

Khater was allegedly recorded using a spray on Sicknick, and FBI agent Riley Palmertree said that video and audio support the first count of the indictment against Tanios, conspiring to injure an officer.

“This wasn’t a weekend visit to see the blossoms in D.C.,” the judge noted.

During a Zoom hearing before the Northern District of West Virginia on Monday morning, Assistant U.S. Attorney Sarah Wagner argued that Tanios presented too much of a danger to the community and a flight risk to release pending trial.

“Mr. Tanios has been charged with three crimes of violence,” Wagner noted, adding that in any other context—even if this were not an attack on the U.S. Capitol in Jan. 6th—a defendant accused of conspiring to assault three officers would be considered a danger to the community.

For Wagner, the Tanios reply of “not yet” for Khater’s request for the bear spray proves planning and coordination.

“This was not just one victim,” Wagner said, adding that there were three and would have been more if not for a lieutenant’s intervention.

Though she did not address Sicknick’s death, Wagner told Magistrate Judge Aloi that one of the officers hit with spray still had scabbing three weeks later, and she showed a video of Sicknick pacing and rubbing his face after an attack.

According to Wagner, the manager of a firearms store told the government that Tanios asked whether he could bring firearms or pepper balls to Washington, D.C. Wagner said that the manager answered no, and so Tanios bought bear spray and pepper spray instead.

Asked by Judge Aloi whether Tanios was a flight risk, Wagner replied that the government learned from a tipster that his mother might try to spirit her son back to Lebanon, a country with no extradition treaty with the United States.

The mother described how her family fled war in Lebanon, building a new life in New Jersey with “no money, no nothing,” only a “broken heart.”

“I lost my father,” she said, fighting back tears. “I lost my brother. I lost my sister.”

“I said, ‘I want to come to the United States,'” Ms. Tanios said. “United States, it is a country for all the world.”

Prosecutor Wagner did not dispute that fact, but the immigrant family’s appreciation to the United States did not allay her concerns.

“We believe there is a network for Mr. Tanios to elude facing these charges,” Wagner replied.

Gross countered that her client Tanios relinquished his passport and is not going anywhere.

Amanda Lynn Plumley, the mother of three of Tanios’s children and partner of a decade, also got emotional on the witness stand.

Seeking to allay concerns about her partner’s weapons, Plumley said: “I already had a registered gun owner come and take them.”

In his charging papers, Tanios can be seen at his Sandwich U business in Morgantown, West Virginia, on a social media account called “kingofthefatsandwich.”

Plumley said that her partner worked 80 to 100 hours a week at that business.

Though Assistant U.S. Attorney Wagner acknowledged the suspect has his family’s love and support, the prosecutor noted: “These community ties were all in place when he committed these crimes that he’s accused of.”

Over the prosecution’s objections, FBI Agent Palmertree was called to testify about the evidence supporting the case against Tanios. The government believes that the defense is trying to get a “backdoor” into the evidence and merits of the case before discovery begins.

“I do want him to talk about what facts would assist me to what weight to accord the proffers and the video,” Judge Aloi said.

Defense attorney L. Richard Walker, who is also representing Tanios, chafed at those restrictions in a contentious back-and-forth.

“This is going to be hard time for him, if he’s not released,” Walker said, vowing to appeal any ruling that leaves his client in jail.

Palmertree noted that his investigation is ongoing, and he conceded that the conspiracy count against the officers did not suggest that Tanios and Khater knew the fallen officer’s identity before Jan. 6.

The prosecutor entered multiple videos and photographs into evidence supporting her case.

Update—March 23 at 12 p.m. CT: This story has been updated to add the judge’s written ruling, a day after he declared his decision from the bench.

The ruling is below:

(Photographs from the Justice Department)